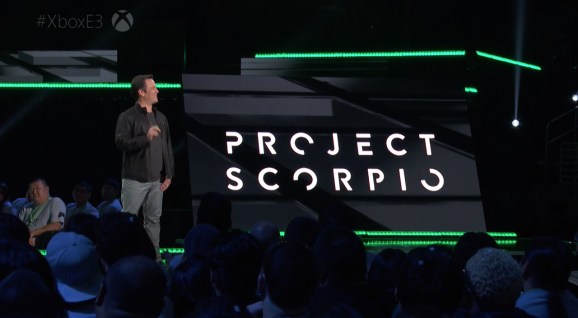 Phil Spencer at E3 2016 talking about the Scorpio.

Microsoft announced its new video game console — and a stab at Sony and the market-leading PlayStation 4 — for the holiday season of 2017: Project Scorpio.

Microsoft made the announcement at its press briefing ahead of the Electronic Entertainment Expo, the big game trade show in Los Angeles that begins Tuesday. The rumors of the machine leaked over the weeks, under the code-name Scorpio. The console will be able to display on 4K televisions and handle games in virtual reality — and at the moment, all we know about the PlayStation Neo and its rumored 4K capabilities is that it won’t be at E3, one of the most important events on the $99.6 billion game industry’s calendar.

“We believe in hardware innovation without sacrificing compatibility,” said Phil Spencer, head of Xbox, at the close of the Microsoft event. “The next step change for gamers and developers must deliver true 4K gaming and high-fidelity VR. I’m really excited to share what we have been working on.”

Patrick Soderlund, head of studios at Electronic Arts, said he was stunned when he saw the specs.

The machine has 6 teraflops of computing power, with high-quality pixels. It will be the most powerful console ever built, Spencer said. It uses AMD graphics tech — the chip maker announced new video cards at just about the same time as Microsoft showed of Scorpio this morning.

“We believe it’ll be the most powerful console ever built, with 6 teraflops of power, this will be the console to lead us into true 4K gaming,” Spencer said.