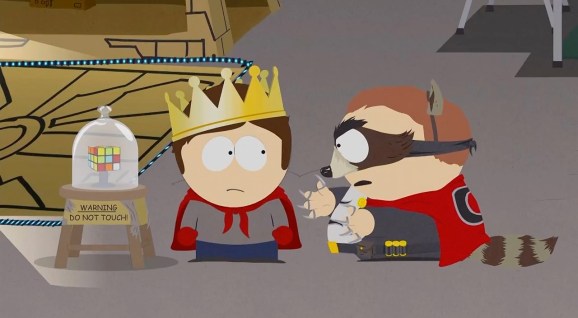 The Fractured But Whole.

The Fractured But Whole is based on the South Park characters’ superhero alter egos. It is similar to 2014’s The Stick of Truth, which featured Cartman and friends in fantasy garb. It comes out on December 6 for PlayStation 4, Xbox One, and PC. The Stick of Truth was from Obsidian Entertainment, which specializes in role-playing games, but Ubisoft San Francisco is creating The Fractured but Whole.

Ubisoft introduced the game that looked like it could have been for been other Ubisoft titles like Watch Dogs or The Division. South Park creators Matt Stone and Trey Parker came on talk to talk about the game. They noted that it is a direct sequel to The Stick of Truth and stars the same “new kid” character. It will also borrow plot elements from Marvel’s Civil War arc. They also noted that a “gay fish” character will send players on a quest to heaven, likely referencing an episode of the show that starred Kanye West.

Combat is still turn-based, but you can now move around a tile-based battleground, like in strategy-role-playing games such as The Banner Saga. Just like with The Stick of Truth, gameplay looks identical to the show (and you could play as a “Jew” class, too). Ubisoft also noted that anyone who buys The Fracture But Whole will get a PlayStation 4, Xbox One, or PC version of The Stick of Truth.

The Fractured But Whole was announced during Ubisoft’s E3 event last year. E3 is one of the largest gaming shows of the year, so it often brings new game announcements.