Space marines, Orks, and the Eldar about to clash again on a mysterious planet called Acheron. The combat will be beautiful and intense. Welcome, once again, to the Warhammer 40,000 universe and the latest real-time strategy game from Sega.

Sega’s Relic Entertainment is showing off Warhammer 40,000: Dawn of War III this week at the Electronic Entertainment Expo (E3) trade show. Philippe Boulle, game director at Relic Entertainment, is breathing a sigh of relief that he is finally able to start talking about title. Relic has been making real-time strategy games on the PC for 17 years, and it last released a Dawn of War title, Warhammer 40,000: Dawn of War II, in 2009. So, a lot of pent-up demand exists for something new, Boulle said. And it’s his job to make sure that those fans get what they want.

The combat is going to be fast and furious, and the timing could be good because the PC is enjoying a very nice resurgence. We caught up with Boulle at a recent event and interviewed him about the project. 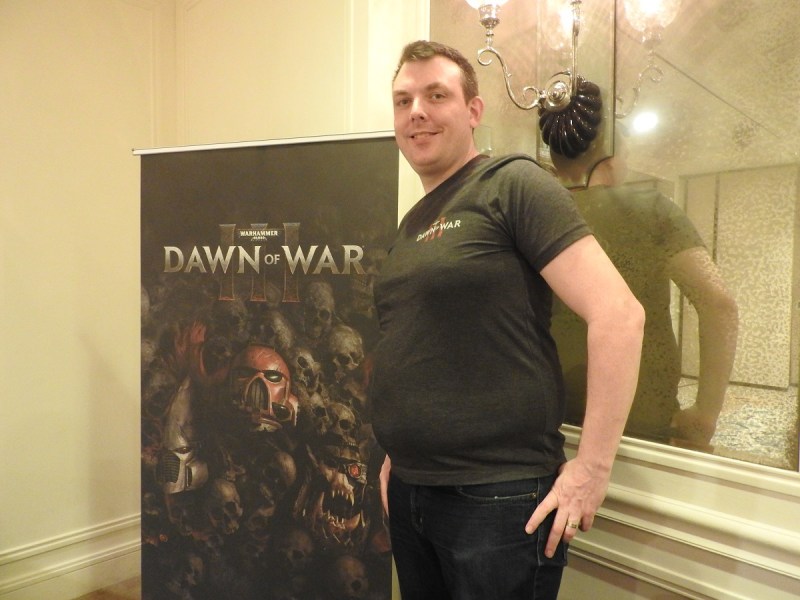 GamesBeat: How many years have you been working on this now?

Philippe Boulle: I’ve been on the project two-and-a-half years. I can’t tell you how thrilled I am to finally be able to talk about it.

GamesBeat: Did you guys roll off of something else, a previous Dawn of War game, and on to this?

Boulle: We’ve been building Dawn of War games in Vancouver for more than 10 years now. Personally, I worked on several of the previous ones — Dawn of War II, Dark Crusade for the first Dawn of War. Just before this project, I worked on Company of Heroes 2.

GamesBeat: As far as tech goes, what’s possible in a game like this now?

Boulle: We’ve done a lot to make the game look its best. I’m super proud of what it looks like. The underlying tech is the Essence engine, which we used to build our previous games. We’ve inherited a lot of the important tech that makes a great RTS.

GamesBeat: How many units can you theoretically get on the screen now?

Boulle: Theoretically, we can do a lot. At the end of that battle there, you have dozens of squads on each side without any problem.

GamesBeat: Does it scale from low-end machines to the higher end? 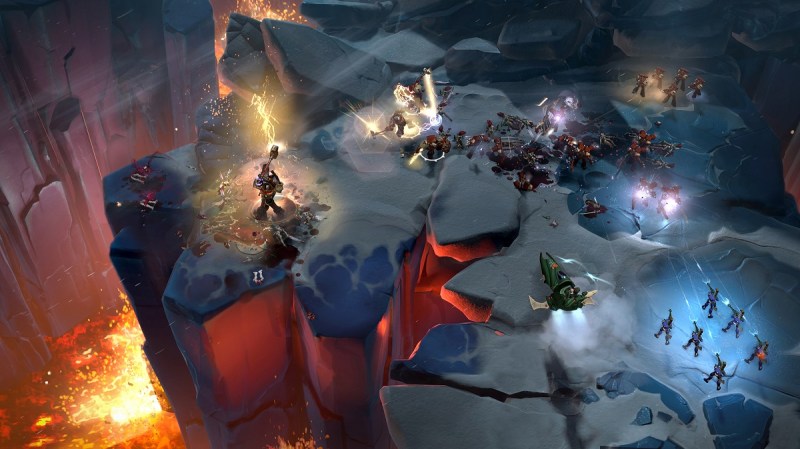 Boulle: We’re not really ready to talk about or spec. But we definitely want everyone who gets the game to be able to play it at a fun level. We’re making sure that things scale well.

GamesBeat: The special characters, the elites, can you talk about the role they play? Why draw that attention to a particular character?

Boulle: It’s something that worked well for us in Dawn of War II. We wanted to build on that tradition and merge it with the larger armies. It’s also something that works well with the Warhammer franchise. It’s a world full of these over-the-top characters who are really unique one from the other. We just saw a lot of fun opportunities there.

GamesBeat: Where are we in the fiction here? What sets it up, when we get down to this mysterious planet?

Boulle: The idea is that this planet, Acheron, is supposed to appear out of the darkness and hold a powerful weapon. The three races are getting ready to go there and compete for it. There’s a deeper backstory that we’ll get into later in the campaign, but this is really one of the key posts of our accessibility mantra I was talking about. There are all kinds of details about how this fits into the larger Warhammer universe, but I can come to it and understand, “OK, there’s a mysterious planet with a magic weapon that I want to get to. I’m [going to] go for it.”

GamesBeat: And the cinematics tell the story in between battles?

Boulle: We’ll be talking about cinematics a little later in the campaign. Obviously, we’re a bit early now. You saw some of our in-engine sequences in the game, and then we also have some more cinematic magic coming.

GamesBeat: There’s a bit of a scarcity of RTS games on the market today. Do you have any thoughts as to what explains that and what you might do to help the genre come back?

Boulle: I don’t know if there’s a scarcity. There’s certainly been a lot of games. We’ve been successfully making RTS for 17 years now. We’re happy to keep doing that. A huge audience out there has been introduced to basic RTS mechanics through MOBAs and so on. We’re just happy to deliver a game like this right now. 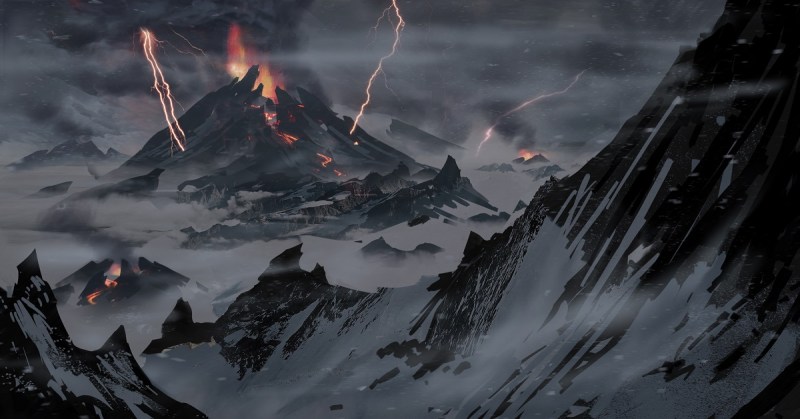 GamesBeat: As far as identifying the audience, then, where would you say the audience is today compared to in the past?

Boulle: Like I [said], so many people have [been] introduced to these mechanics. The PC space is thriving. We’re long past the days of people claiming that PC is dead. All kinds of people are interested in strategy games, and we’re going to bring that to them. We have a built-in fan base of people who were fans of the previous games, but we’re rolling out the welcome mat to both those players and the rest of the audience out there.

It’s not to say that this game is for every possible person out there. You need to be interested in strategy games. You need to want to play these sort of cosmic conflicts. Assuming that’s true, you’ll definitely find some fun here.

GamesBeat: What were the pillars you were mentioning again?

Boulle: Spectacular battle is the most important one. That’s the vision for the core gameplay. Then building your army, which is about those elite heroes, and the accessible campaign.

GamesBeat: Can you explain more of the details behind the accessible campaign?

Boulle: The idea there is twofold. One, we want to make the campaign storyline compelling. You start with the mysterious planet and the magical weapon. I can get behind that, and then I can discover the depth as I go into it. We have some bold, archetypal heroes you can sink your teeth into, so to speak. It also means using the single-player campaign to highlight the depth of the mechanics that exist in the game. You not only get some early tools that you can use relatively easily, but you also understand that there’s so much more depth to plumb, and you get some direction as to how you’re going to do that.

GamesBeat: At this stage, how much do you have left to take care of?

Boulle: We’re working hard on all kinds of aspects of the game. We’re delivering more and more content at this point. 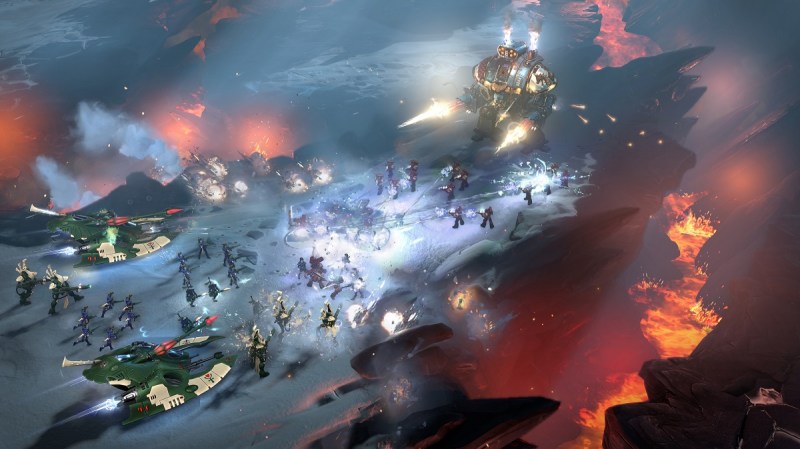