Rojas and Hartman shared data about its first class of applicants Tuesday at Botness, providing a glimpse of what early-stage startups are working on in a fledgling bot ecosystem. Botness is a gathering of about 50 chatbot developers, AI startup founders, and chat apps held Monday and Tuesday in San Francisco.

For Botcamp’s inaugural class, 10 chatbot startups will be selected from a field of nearly 350 applications (submitted via chatbot, of course) from entrepreneurs and startups from the U.S., China, South America, Africa, and elsewhere. Finalists will be selected in the coming weeks.

Accounting for 15 percent of all applications, enterprise was the largest category of applicants. Platforms, personal assistants, health and wellness, and commerce rounded out the top five.

Participants in the Botcamp accelerator will receive investment from Betaworks and join bot maker Howdy, IFTTT, Medium, Product Hunt, and 100 other startups.

Botcamp will choose applications submitted by early-stage concepts and projects that are further along, but the enterprise space had the most “fully formed” ideas that can be incorporated into an employee’s workflow and have broad implications.

“We were a little surprised by how much we came around to seeing the utility of bots in the enterprise space when our original focus was that we’d have a lot more consumer,” he said. 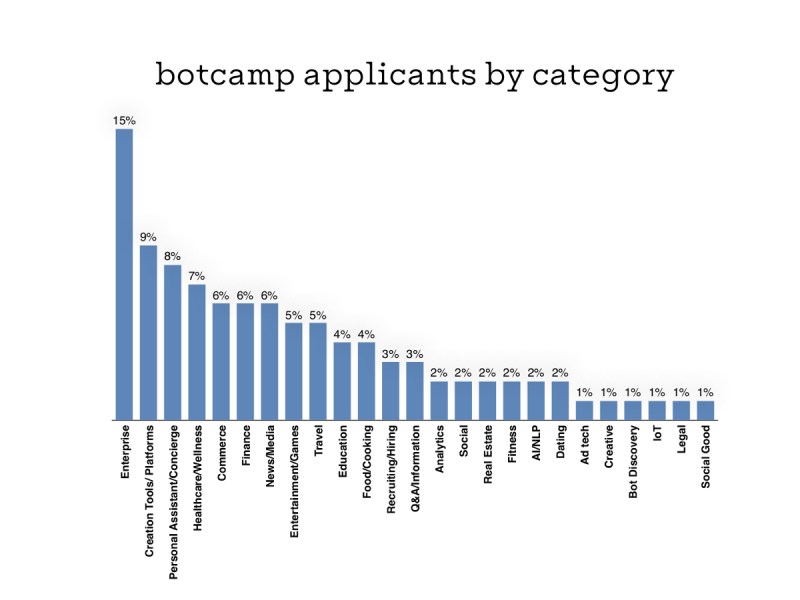 “If you take out assistants/concierge [which] is eight percent and if you look at travel which is five percent, and maybe one other category, those are the only human-assisted categories. Everything else is what we think about as actual bots,” Hartman said.

SMS was the largest platform applicants are building for, followed by Slack, App, Telegram, and the web. 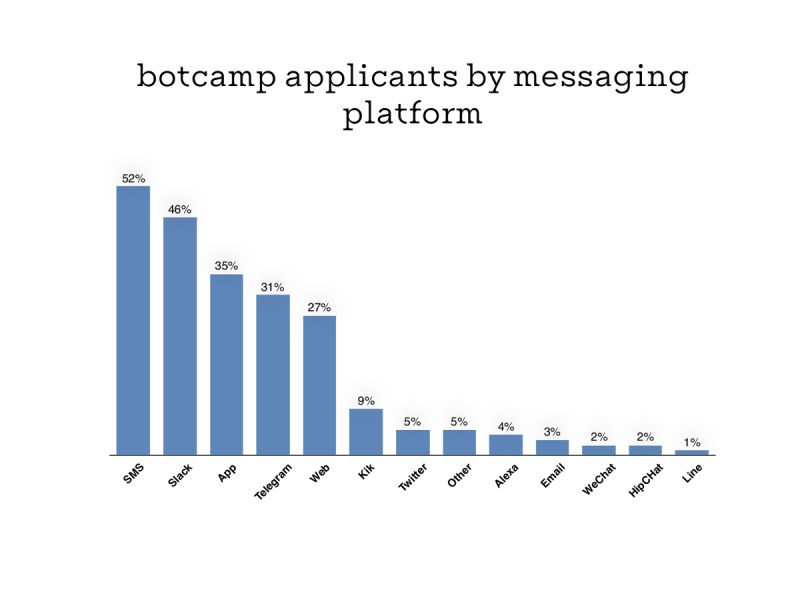 Partners, sponsors, and mentors include Slack, Facebook, Amazon Alexa, Bloomberg Beta, and SV Angel. Betaworks has partnered with The Chernin Group to invest in each of the companies.

“The view that we’ve taken from the investment perspective is that we were looking for bots where there was some level of depth somewhere. So Uber, as an example — that bot has the most depth,” Hartman said. “Whether that’s deep data science or a bunch of data they’re gathering or AI or some kind of network that’s being built. That is sort of how we’re thinking about competitive bots.”