Final Fantasy XV wastes no time throwing you into the game. Considering that it’s been in the public eye for more than 10 years, that’s a good thing.

Developer Square Enix’s long-awaited Japanese role-playing game (first announced in 2006) is coming to PlayStation 4 and Xbox One on September 30. The story follows Prince Noctis and his three closest friends as they travel around the world in a fancy black car. They’ll encounter invading armies, benevolent giants, and a ton of hostile monsters. That’s not too different compared to the other entries in the franchise, but where Final Fantasy XV differs is in its expansive free-roaming areas.

At a recent hands-on preview event, Square Enix brought a surprisingly long demo (three hours) that covered the first two chapters of the game. I wasn’t able to see everything (I had to put it down after two hours), but I felt like I got a good idea of what to expect in the full release. One of the most striking things about my time with the game was how fast it put me into the story. Traditionally, past Final Fantasies made you go through lengthy introductions or tutorials before letting you run around with the characters.

The FFXV demo didn’t have that at all. Chapter 1 opened with Noctis and his companions — Prompto, Ignis, and Gladio — pushing their broken car down the road to the nearest repair shop. A few seconds later, the camera panned away to the sky as the title showed up on-screen, all while a cover of the classic song “Stand By Me” (a powerful rendition from popular rock band Florence and the Machine) played in the background. 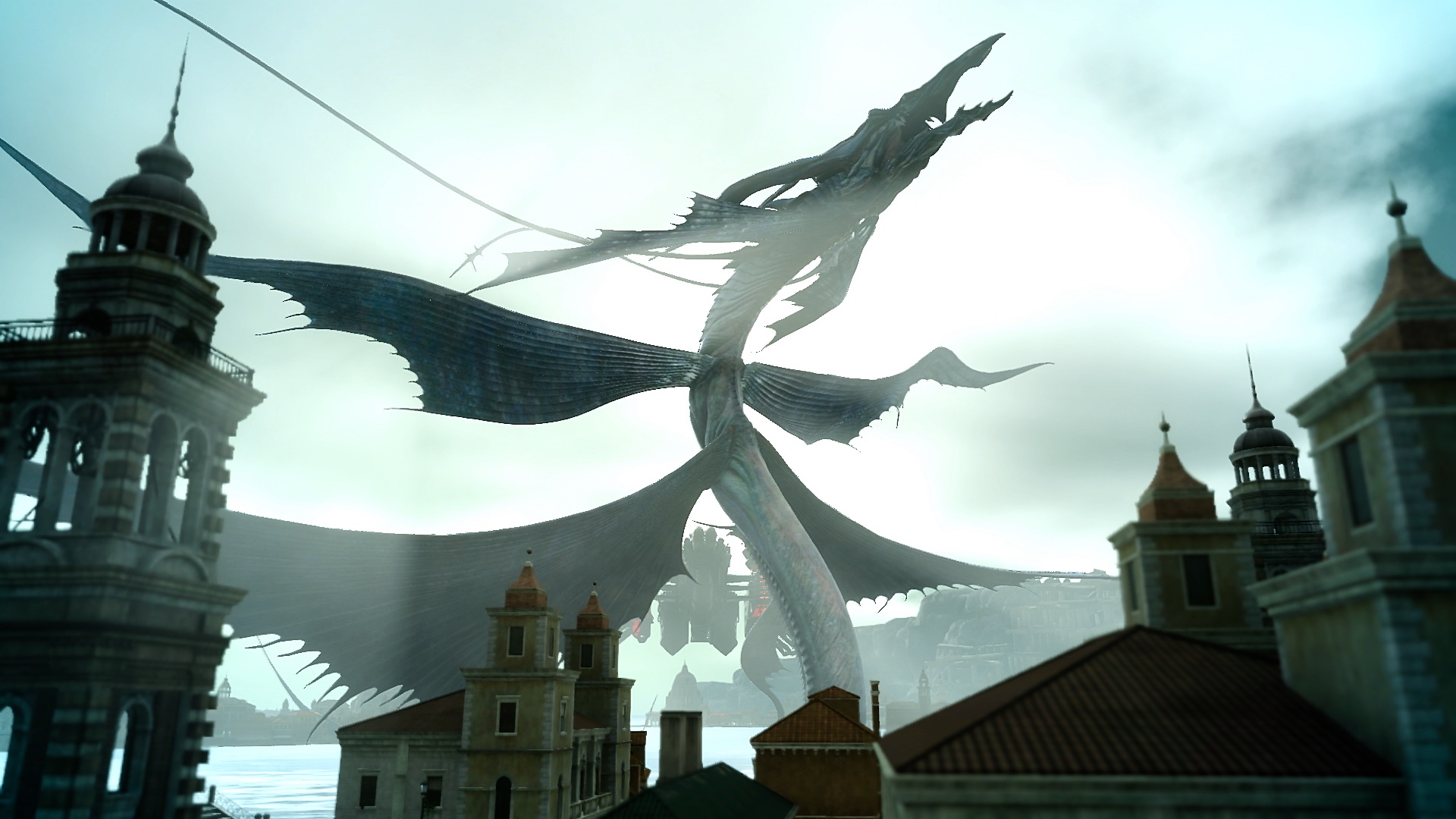 Above: Friend or foe?

The subdued opening was a strange but thoughtful way of starting Noctis’s adventure. According to Final Fantasy XV director Hajime Tabata, the full version of the game will have a scene that takes place before Chapter 1, and that players will be “thrown into the gameplay” even quicker than what I experienced in the demo.

“If you recall Final Fantasy II, it started off immediately with a boss battle — you’re kind of thrown into the fray and start the gameplay right away,” Tabata said (via translator) in an interview with GamesBeat. “That was a different methodology that Final Fantasy II took from the first installment. It was more of a movie-like way of approaching the opening sequence. That was very memorable. In that sense, [FFXV’s opening] is kind of a homage to Final Fantasy II.”

Instilling a sense of wonder

With the car out of commission, I had no choice but to travel on foot. At first, that felt similar to the Episode Duscae demo that came with copies of Final Fantasy Type-0 HD last year, where players could run around a self-contained area to tackle side missions and fight a bunch of monsters. The big drawback to Episode Duscae, however, was that it felt empty: I didn’t get the sense that this was a place where people and animals actually lived. The new demo, however, did a much better job of making me more interested in the universe that Tabata and his team built.

In addition to being the home of wild canine-like creatures, the arid landscape I was in had a gigantic wooden powerline that someone (or something) had knocked down. Noctis and his friends talked about the debris as they passed by, but they couldn’t figure out what caused it. A similar thing happened a short time later, when the group saw a huge bird flying through the sky. The boys watched it pass over them, but like me, they weren’t quite sure what it was.

While minor overall, those two moments were great because of the questions they raised: “Did the monster destroy the power line? Why is it flying around here? Can I control it?” I wanted to find answers by seeing more of the world. But first, I had to fix my car. 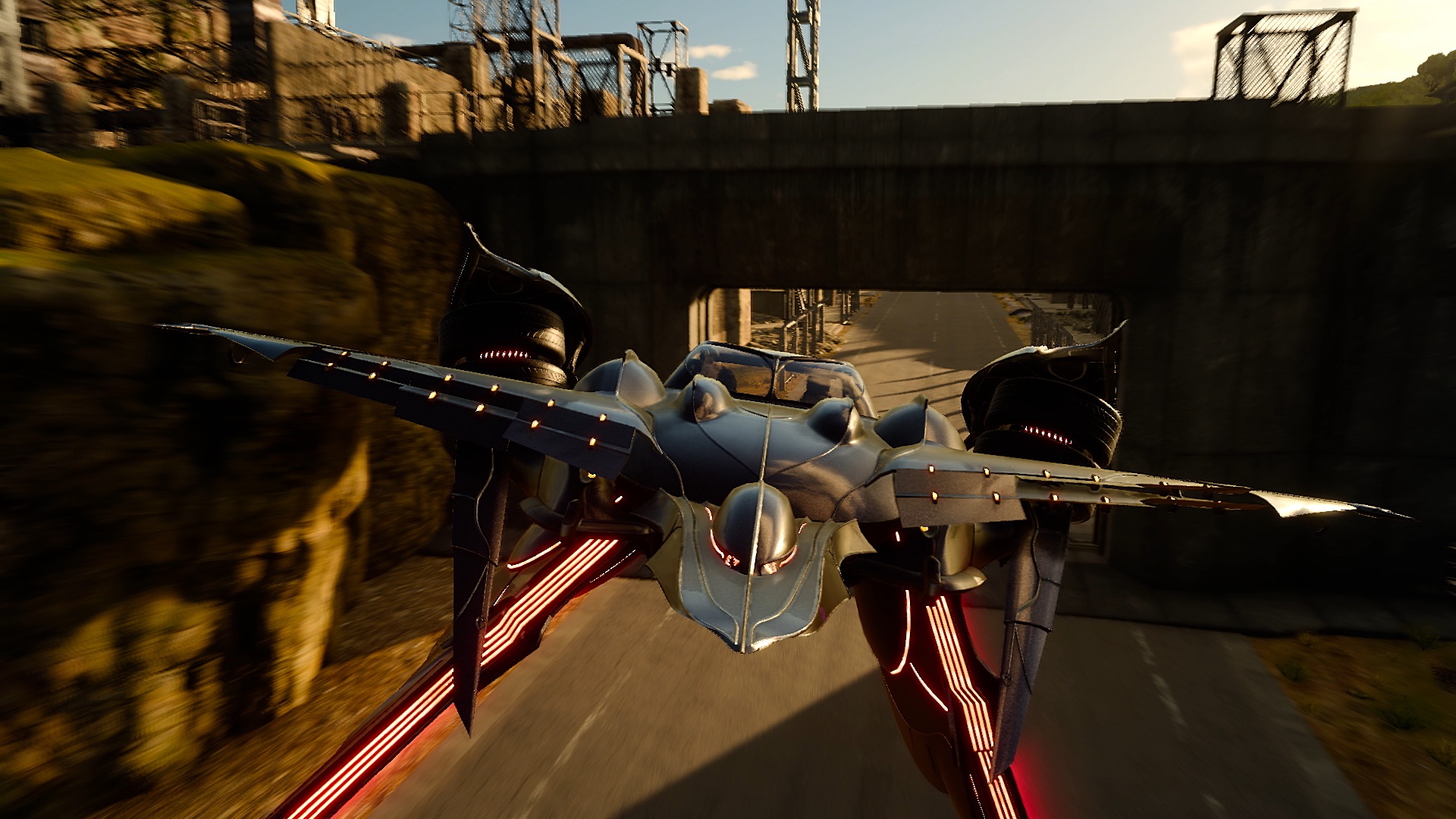 Above: The Regalia can also transform into an airship with the right upgrades.

Your main mode of transportation is the Regalia, a car that used to belong to Noctis’s father, King Regis. Once the group repaired it, I was free to drive through the desolate hills and pastures that surrounded me. It was just as silly as I thought it’d be from watching previous FFXV trailers. The car radio played recognizable tunes from past Final Fantasies, and the characters talked to each other to pass the time.

In one instance, Prompto asked me to stop the car so he could take pictures of everyone near a mountain. While you can’t aim the camera yourself, Prompto will learn to take better photographs over time. And whenever you camp for the night (to restore your health points and other stats), you can go through his photos and pick the best ones to keep.

It was a cool little touch. I was basically customizing my own Final Fantasy XV scrapbook.

“Of course, it’s a Final Fantasy title, so story is extremely important to the game. But the other aspect that we really placed a lot of importance on was the adventure,” Tabata explained. “And the balance between that story and adventure — [a game] that encompasses both aspects is the new generation of Final Fantasy that we wanted to deliver and that we wanted to bring to our audiences.”