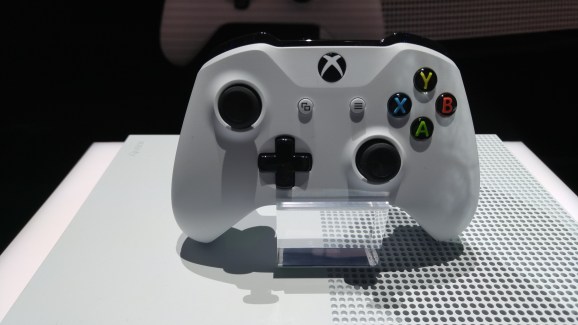 The new Xbox One controller has a suite of improvements.

Microsoft is now on the third revision of its standard Xbox One controller, and it’s a noticeable improvement.

The company revealed the gamepad during its media briefing prior to the Electronic Entertainment Expo tradeshow in Los Angeles, and GamesBeat went used it while playing Gears of War 4. While I noticed a few obvious improvements, Microsoft claims the device, which is still $60, packs a few hidden bonuses that makes it even better than the 2015 revision that introduced the built-in 3.5mm headphone jack.

One of the most surprising things I learned about the new controller is that it has Bluetooth support. The Xbox company has always tied down its wireless accessories to a proprietary communication protocol, and that means you can’t easily connect it to other devices without buying something extra. You need the Xbox One Wireless Adapter to connect your Xbox One Elite Controller to a PC without a USB cord. But now, with Bluetooth, you can connect it to anything that supports that wireless standard and doesn’t have any restrictions (though I doubt that it would work with a PlayStation 4).

While I didn’t notice the Bluetooth, I couldn’t miss the added texture on the back of the controller. This is a new kind of plastic for the Xbox One device, and it helps you grip the controller. While the controller the Xbox One launched with has a smooth feeling material that slips your grip, the new one sits firmly in your hands. The plastic grabs the meat of your palm and inner knuckles in a satisfying manner.

Id doesn’t feel as great as the Elite (which is the best controller I’ve ever used), but it’s a significant improvement over what Microsoft has done before with its $60 gamepad.

The new thumbstick is another thing I noticed. It has a smoother motion, and a Microsoft spokesperson explained that it won’t wear down over time. You can rotate it over and over for thousands of cycles, and it should work the same as the first day you bought it.

Finally, the controller has an increased range. Microsoft is hesitant about making direct claims how far away the gamepad can be to still work with the Xbox One, but it said it will work from 12 meters away (nearly 40 feet) in an empty space. But it was adamant that you shouldn’t expect that kind of performance.

Microsoft has put a lot of effort into improving the quality of its controller after getting off to a rough start with the Xbox One launch version. That gamepad had mushy bumper buttons and sticks that didn’t have enough tension. The company fixed that in 2015 with the update to the 3.5mm revision, but it’s smart that it is continuing to evolve its input device — especially building on top of everything it has learned making the Elite.