Your watch began at the end of last month, but it’s still on.

GamesBeat has partnered with iSpot.tv, which measures TV advertising in real-time, to bring you a monthly report on how gaming brands are spending and which are generating the most digital response. The results below are for the top five spending gaming industry brands in May. 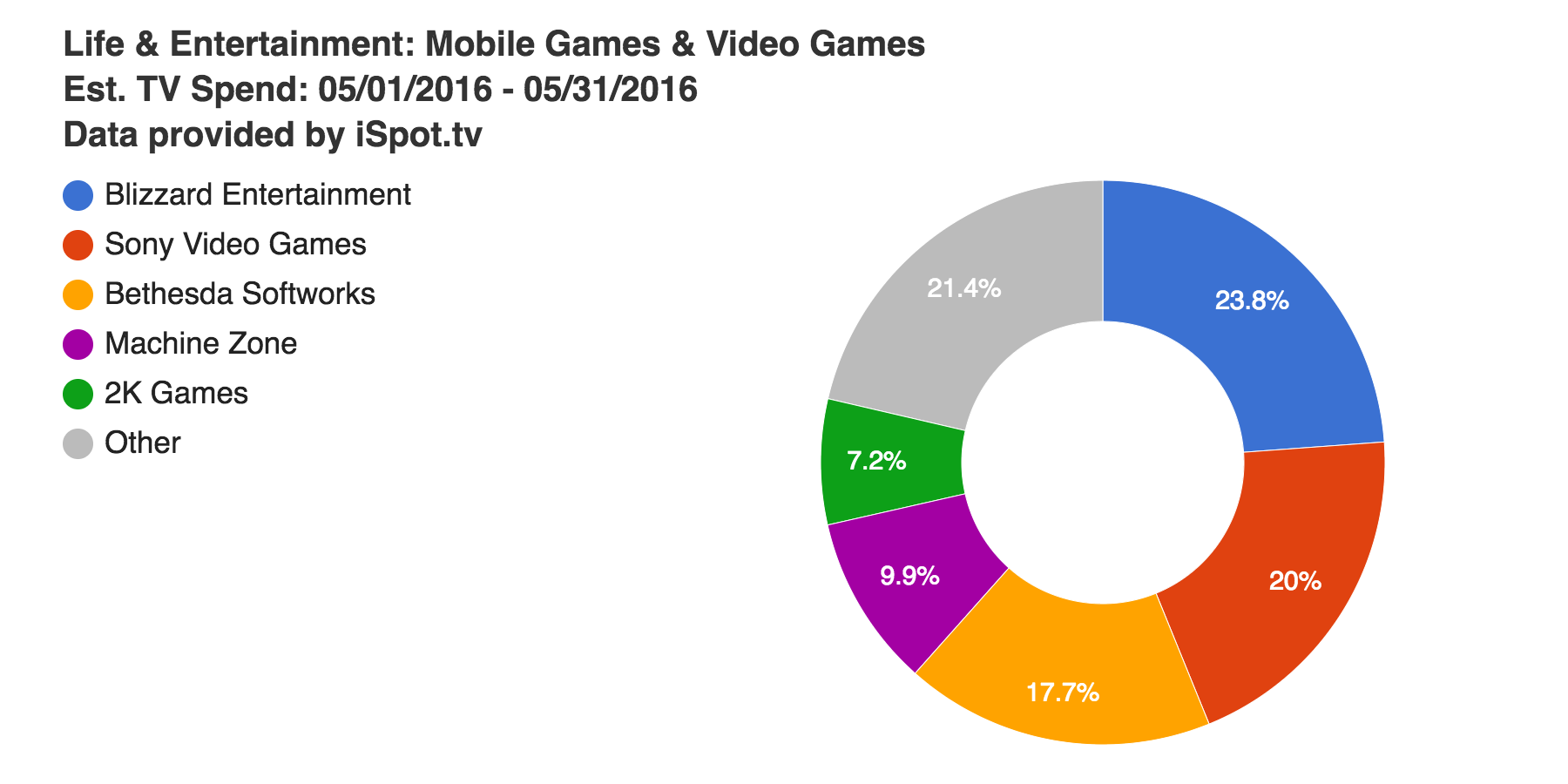 Throughout the month of May, 36 gaming brands ran 86 commercials 20,030 times on national TV, for a total estimated spend of $45 million. Blizzard Entertainment was dominant during this period, with Bethesda Softworks, our previous title-holder, dropping to third place. Sony Interactive Entertainment and Machine Zone also increased ranks, while 2K Games returned to the leaderboard.

Blizzard Entertainment closed the month as the industry’s top spender, budgeting an estimated $10.7 million to run 10 spots nearly 3,500 times. Heavily pushing the anticipated and recently released Overwatch, the brand spent most prominently on “Your Watch Begins,” which ran nearly 2,000 times over the past month. Blizzard also ran a co-branded commercial in partnership with ESPN, “Play-by-Play,” to further the release of this new major franchise.

Jumping up the chart, Sony Interactive Entertainment finished May in second place, up from third in April. The brand ran four commercials 1,213 times on national TV, for a total estimated spend of $9 million. Still focusing primarily on Uncharted 4, the brand also ran an ad for its Wheel of Fortune mobile game. The brand’s top ad, “Gameplay Trailer,” received the bulk of the month’s budget and returned 89.3 million impressions on TV. The majority of these impressions came from airings during SportsCenter, the NBA playoffs, and Family Guy.

Bethesda Softworks slipped from the title-holding position down to third in May, with estimated spending just under $8 million for its TV ads during this period. Continuing the push of its recently released fan-favorite Doom, the brand prioritized sporting events and dramas like the NBA and Fear the Walking Dead for its ad placements. “Launch Trailer,” the ad with the biggest push, generated over 105.7 million impressions on TV alone.

Moving up from fifth place, Machine Zone closed the month in fourth, racking up an estimated $4.4 million worth of national TV ad time through 4,015 airings. With three spots, Machine Zone focused exclusively on Mobile Strike, continuing to push ads featuring the game’s spokesperson, Arnold Schwarzenegger. In total, the brand’s ads racked up over 456.3 million impressions on TV. The top ad, “Command Center,” appeared most often on the American Heroes Channel, Fuse, and the NHL Network.

Closing out the top spending leaderboard is 2K Games, with just over $3.2 million in estimated spending. Running six spots pushing three games — Battleborn, NBA 2K17 and WWE 2K — 2K Games generated over 122.5 million impressions on national TV. The brand’s top ad, “Live Together or Die Alone,” ran most heavily during the NBA playoffs and generated the bulk of the brand’s impressions (119.4 million).