It’s time to rumble with your Jigglypuff.

For its Electronic Entertainment Expo livestreaming presentation from Los Angeles, Nintendo’s Treehouse localization team revealed new information and showed off a new game mode for the upcoming 3DS games, Pokémon Sun and Moon. E3 is one of the biggest video game events in the world, where game companies show off their latest products and announcements, and few are as big as Pokémon — the brand earns $1.5 billion annually. The game series alone has sold over 200 million copies, and the Sun and Moon will give this a boost when they release November 18.

The biggest reveal is Battle Royal. The new mode includes four players, with each player picking three Pokémon. Unlike traditional battles, where the match ends when one trainer loses all of their Pokémon, whoever knocked out  more — and has the most monsters left — is the winner.

A battle with a Ledyba was also shown, confirming the return of older generations of Pokémon. The lighting of battles will also change, depending on the time of day. Three new Pokémon –Yungoos, a mongoose; Pikipek, a woodpecker; and Grubbin, a larva  — also made their debuts. On the bottom screen during battles, if you’ve battled a Pokémon before, the game will show which moves will be Super Effective. 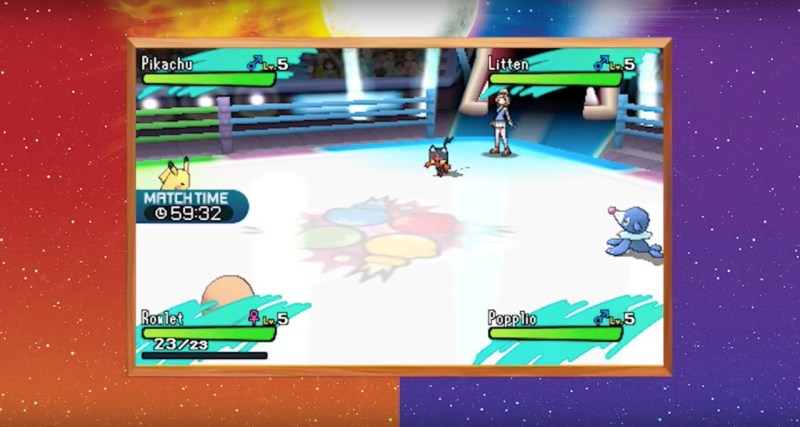 Above: Sun and Moon makes dollars and cents ... look, I don't know what that means either. It's the end of the year. Leave me alone.

It was also revealed that Hala, the character that gives players their first Pokémon, is not a professor, but a strong trainer. Kukui is the professor who specializes in Pokémon attacks.

The story starts off with a festival, where you battle Hau, who uses a Pichu and Litten.

Sun and Moon are also quite rich with its Hawaiian inspiration, including tiki torches and other tropical influences. It was also mentioned that the legendary Pokémon — Solgaleo and Lunaala — are the emissaries of the Sun and the Moon, and will tie into the story in a way the series hasn’t done before.