Link is getting wild — and he’s doing new things in his first adventure for Nintendo’s upcoming code-named NX home console.

In Nintendo’s 2016 Electronic Entertainment Expo stream, the company revealed its first gameplay details for the The Legend of Zelda: Breath of the Wild for the Wii U and NX for 2017. This year is the Zelda series’ 30th anniversary (the original debuted in 1986 for the Nintendo Entertainment System). Along with Mario, Zelda is one of Nintendo’s flagship franchises, and its games are among the most highly anticipated releases in the industry.

New features show series hero Link cooking and manipulating the environment as well as playing with physics. Link has can jump, climb on walls, and also has a stamina gauge.

It starts with Link in the Shrine of Resurrection. There, he finds the Sheikah Slate, the in-game representation of the Wii U GamePad. For the first time in a Zelda game, Link won’t find hearts anywhere — in Breath of the Wild, he recovers health from eating food.

Gallery: The Legend of Zelda: Breath of the Wild E3 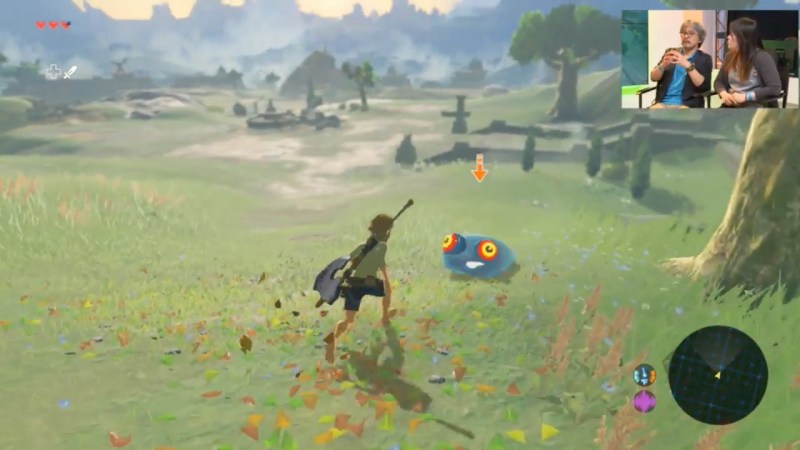 Above: Link takes on a slime-like Chu-Chu.

Weapons work quite differently than in past Zeldas. Similar to the GameCube’s The Legend of Zelda: The Wind Waker, Link can take enemy weapons and use them. Link used a tree branch that he turned into a torch to burn down bushes. With the Woodcutter axe — the first time Link has ever had an axe — Link can chop down trees to make firewood. Weapons can also break.

The Traveler’s Bow and a hang glider also made an appearance. Link can also equip clothing — an old shirt and well-worn pants — while you can also play the whole game nude too, if you want.