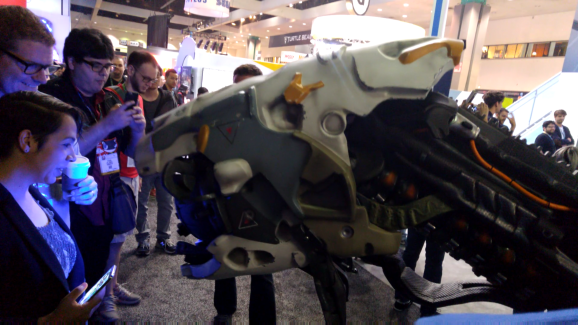 Horizon: Zero Dawn is one of the PlayStation 4’s most interesting upcoming games, and that has led to Sony unleashing a monster upon the industry.

Inside the Los Angles Convention Center, which houses the Electronic Entertainment Expo trade show, Sony has a roving cosplayer dressed as a robo-dinosaur from its upcoming Horizon sci-fi hunting adventure. This mammoth costume is several meters long from its head to the tip of its tail, and it requires four people — in addition to the human being inside of the outfit — to help it navigate the crowded aisles of E3.

Check out the clip below to see how the cosplay forces the tradeshow’s halls to come to a halt so that people can get a look at the craftmanship and so that the tail doesn’t accidentally knock someone out.