London’s St Pancras sees some 48 million passengers pass through each year, and is the U.K. capital’s main artery for the Eurostar rail service into mainland Europe. The station has had a public Wi-Fi service since 2014, and although it already offers free unlimited internet to those passing through, there are some restrictions to the service. For example, registration is required after the first ten minutes, which may not be ideal for fleeting visitors unlikely to pass through again anytime soon.

And although bandwidth on the station’s network is generally very good, Twitter is promising faster speeds and up to four hours unlimited use before visitors have to log back in again. 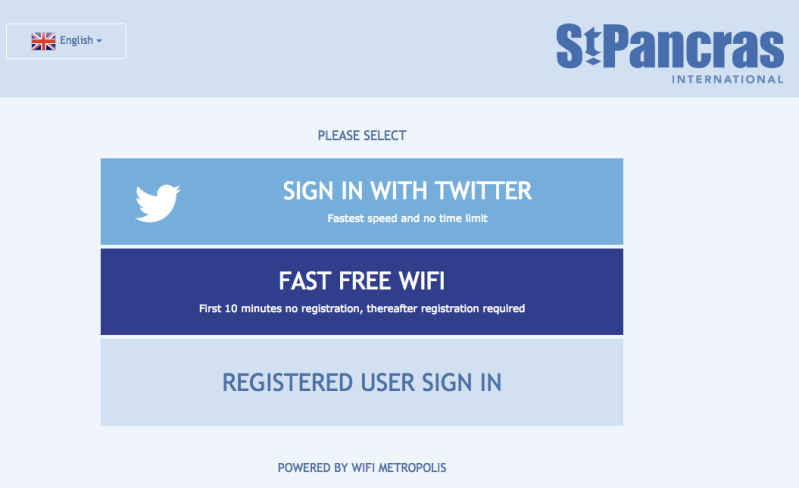 This isn’t the first time Twitter has sought to align itself with a public Wi-Fi network. In December last year, two Canadian subway stations offered Twitter-sponsored free Wi-Fi throughout the month of December for anyone who logged in with their Twitter credentials. For those without a Twitter account, well, they had to create one to access the network. And last February, Twitter struck a deal with Barcelona Airport’s Wi-Fi provider to serve 24-hour ad-free internet access, though this was also just for a month.

While the Canada and Barcelona sponsorships were apparently short-term deals, the St Pancras tie-up appears to be ongoing, insofar as neither party has indicated that it will end anytime soon.

That Twitter is looking to align itself with fast, uninterrupted internet is perhaps indicative of its broader mission to onboard new users — those who have yet to create a Twitter account may be tempted to do so if they see an immediate benefit. “We’re always looking at ways we can make life easier and more beneficial for our users, and also we know how important Wi-Fi is to both travelers and commuters,” said Twitter U.K. managing director Dara Nasr.

We’re seeing a growing number of tech companies pushing to control access to the internet, too. Earlier this year, mobile messaging giant Line revealed plans to become a mobile virtual network operator (MVNO) in Japan, something Google was already pursuing in the U.S. Google has also been working on its own Fiber broadband service, and the company has been testing balloon-based internet through Project Loon for a while. Elsewhere, Facebook has been pushing to connect large parts of the world — it recently revealed a partnership with French company Eutelsat Communications to bring broadband to Africa via satellites. And then there is Facebook’s Internet.org initiative, which offers a limited range of zero-rated online services.

Though mobile internet access is widespread in London, the cost of roaming may preclude many international travelers from accessing online services, and domestic commuters may be unwilling to download large video files on their 4G plans. This is where public Wi-Fi services come into play and why Twitter sees an opportunity in making it easier for people to access Wi-Fi if they have a Twitter account.