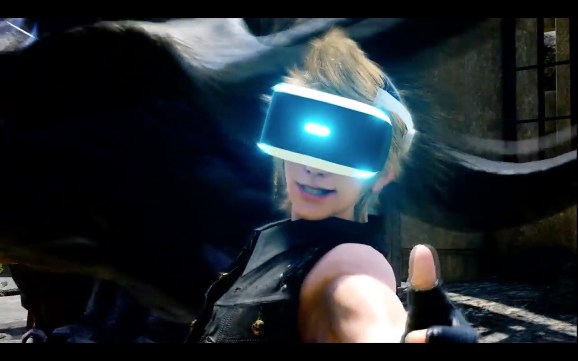 The PSVR headset fits right into the world of Final Fantasy.

The gaming industry is deep into its Electronic Entertainment Expo tradeshow now, but everyone’s ears are still ringing from Sony’s impressive stage presentation on Monday night. But one of the biggest sets of announcements from that is starting to lose some of its luster after a closer look.

Sony hyped up its PlayStation VR headset, which is coming out in October for PS4 at $500, with a slew of announcements that included massive names like Star Wars, Batman, and Final Fantasy. Trotting out major properties like that helped Sony rile up a fan base that is looking for reasons to get excited about VR. After playing a couple of the games, however, disappointment has replaced my excitement.

Let’s run through each game.

In March, at the Game Developers Conference in San Francisco, Sony announced that it is working with publisher Electronic Arts on a virtual reality version of Star Wars: Battlefront. During its E3 conference, Sony revealed that this really only meant that an X-Wing VR mission is coming to PlayStation VR and not a whole game.

I have not gone hands-on with this yet. I don’t think it’s at E3. But this is one of the game’s that disappointed me immediately. The promise Sony made at GDC suggested that we’d get something more meaty than a side story, but the reality looks like a single mission that will not approach the amount of content you’d get in a full game.

It’s smart that EA is building the VR experience from the ground up, but it is also holding back from committing full resources to a project that may end up on a device that fails.

The final product may end up super entertaining, but Sony and EA set this up to disappoint by making big promises earlier in the year and then revealing that we should only expect a morsel of gameplay instead.

Developer Rocksteady has spent the last several years building amazing worlds for players to explore as Batman. The news that it is making a VR Batman game in its Arkham universe was met with a lot anticipation. This is another instance, however, where Sony is setting up a game to fail when it launches exclusively for the PSVR in October.

In the announcement trailer for Batman: Arkham VR, gamers only get to see the Dark Knights cowl. We don’t see any of the action, and that’s because this isn’t the game fans of Arkham Asylum or Arkham City are likely imagining.

I got a chance to go hands on with Batman, and it has problems that remind me of certain Wii games.

The demo features two modes. The first simply has you suiting up as the world’s greatest detective. You equip your weapons. Put on the gauntlets. And don the cowl. It’s fun … but it’s only going to be fun once. The other mode has you investigating the death of the superhero Nightwing (who used to be Robin). This is slightly more interesting in that it has you doing detective work as Batman. Using the Move controllers, you can scroll through a digital re-creation of the fight that led to Nightwing’s death while scanning specific injuries. Using this information, Batman can potentially figure out the identity of the killer.

Rocksteady has done a lot to build this as a VR-specific experience, but it also feels a lot like a limited version of a “real” Arkham game. You stand in one spot and can never move your body. To get around the world, you warp. This means you’re going to do a lot of investigating and that’s not going to lead to a lot of dynamic action scenes.

For me, this is the problem with Sony’s E3 presentation. The company knows that saying “Final Fantasy XV VR is coming to PSVR” is going to get people’s hopes up and imaginations racing. Hell — the trailer on Sony’s page lists it as “Final Fantasy XV | PS4, PSVR.” But this is in no way a full Final Fantasy VR experience. It’s a boring shooter similar to those arcade games with the toy guns that you play while waiting in the lobby at the movie theater.

For my demo with Final Fantasy XV VR, Square Enix sat me in a chair, handed me a Move controller, and sent me in to kill a giant beast. Inside the game, my only options were to shoot the enemy or to warp to another spot to avoid his attacks while my computer-controlled partners attacked with their melee weapons and powers. It was immediately dull because it played like one of those idle clicker games where I just put my cursor over the animal and pulled the trigger over and over.

I hope no one buys a PSVR because of Final Fantasy XV.

The sad thing here is that Sony is burying some truly interesting games because it wants the shock value of the words “Final Fantasy XV VR.” And if you are thinking about getting a PSVR because you’re excited about Batman, Final Fantasy, or Star Wars, well — I guess Sony’s plan worked, but that’s a nasty trick.

My suggestion is that you should get excited about PSVR but because of games that are new and different. I want one of these headsets because of the shape-based puzzler SuperHyperCube, the sci-fi mind-teaser Statik, and — potentially — something like Rigs that Sony’s built from the beginning to work with VR. And forget about having a real first-person adventure in a Final Fantasy world.