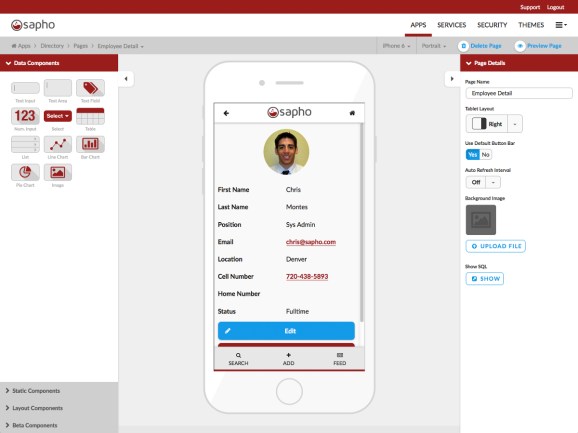 The startup Sapho unveiled its micro apps and Sapho Micro App platform on Wednesday, joining a growing field of startups building bots for use with enterprise software.

The platform allows users access to Sapho Micro Apps — single-purpose bots that let users interact with enterprise software through chat messengers by using cards to visualize actionable tasks. The platform can also be used to customize micro apps and can integrate different kinds of enterprise software, as well as internal databases and legacy systems.

Sapho calls its bots “mini apps” because there is no natural language processing involved; rather, these are small, task-specific applications that operate on mobile devices, web browsers, or messaging apps like Slack.

Enhancing employees’ ability to get work done and increasing workflow efficiency via chat is a bonus for companies with legacy systems and an increasingly mobile and millennial workforce, Sapho CTO Peter Yared told VentureBeat in an interview.

“This new generation of worker who have been trained on the iPhone and Android have a totally different expectation of software, something that you can go to an app store, download, and start working on in 10 seconds,” Yared said. (Disclosure: Peter Yared has contributed a number of editorials to VentureBeat in the past.)

We’re at the beginning of an evolution in the workplace, Yared said. As major chat apps begin to incorporate more interactive elements and buttons, push notifications based on predictable or automated tasks will play a larger role in how people do their jobs. Bots that do natural language processing will evolve, he said, but messages that deliver actionable push notifications will also soon become pervasive in the workplace.

“Google Now, Facebook, Siri, Instagram — all these different systems have trained the end user to expect important things to come to them. The only place where that doesn’t exist is at work, the place we spend eight hours a day, and the idea that that is not going to change just doesn’t seem very realistic to us.”

Frustration with bad software is what led Yared and ElNaggar to leave senior positions at CBS Interactive and create Sapho. Most enterprise bots are trying to address frustration caused by antiquated or hard-to-use enterprise and SAAS software, ElNaggar said.

“We’re moving now to a world that’s much more user-centric and much more micro-app focused,” he added.

Sapho completed a $9.5 million series A round in January and has raised $13.5 million since the company was created in 2014.

Enterprise bot building is a competitive space. About 50 applicants to the Botcamp startup accelerator were enterprise startups or bot builders.