Facebook said that Sony won the attention war among Facebook users at the Electronic Entertainment Expo (E3), the big game trade show in Los Angeles. But another tracking company, ListenFirst, says that Microsoft’s Xbox event won the most attention, as did the small indie game We Happy Few, when it comes to new Internet searches.

Just like Facebook itself, ListenFirst is tracking which brands, studios, and games are generating the most hype at the expo. It is doing so by tracking the number of new Wikipedia page views.

To establish a definitive ranking of “The Most Popular Games” so far, ListenFirst calculated the number of organic searches each title generated. More searches, more popularity.

We Happy Few, an upcoming first-person thriller and a surprise reveal at the conference, stole first place thanks to a surreal and hallucinatory trailer that made fans desperate for more information, ListenFirst said.

In second place was a new God of War title on the Sony PlayStation 4. Both games held large leads over the competition. Overall, several original titles like Detroit: Become Human (ranked third) and For Honor (ranked seventh) scored higher than reboots and sequels. Here’s the full list below based on Wikipedia searches. Here’s also the methodology:

Search Index: Measures consumer organic searches for information about a brand over a period of time, using Wikipedia page views as a proxy. Data reflects a time period from June 12th (EA & Bethesda Softworks) to June 13th (Microsoft/Xbox, Playstation/Sony, & Ubisoft). This is a measure of Wikipedia page views as a proxy for organic search. As an example, Happy Few had >15k new page views yesterday. 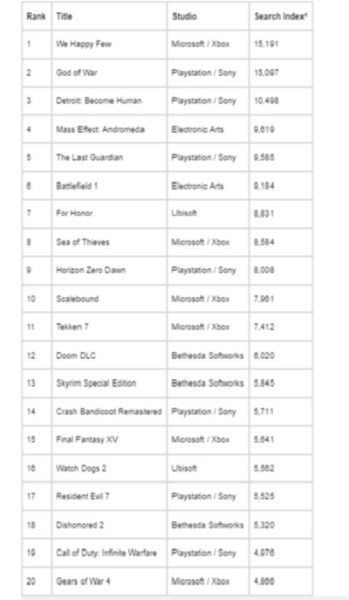 Above: ListenFirst data on who won E3

And here’s a measure of who won E3 in terms of interest. Here’s the methodology:

Interest Score: Measures the organic interest about a brand over a period of time. Data is for June 12th (EA & Bethesda Softworks) and June 13th (Microsoft/Xbox, Playstation/Sony, & Ubisoft) This is made of metrics from Facebook, Google Plus, Tumblr, Wikipedia, and Twitter, and it’s tracking conversation volume and search.