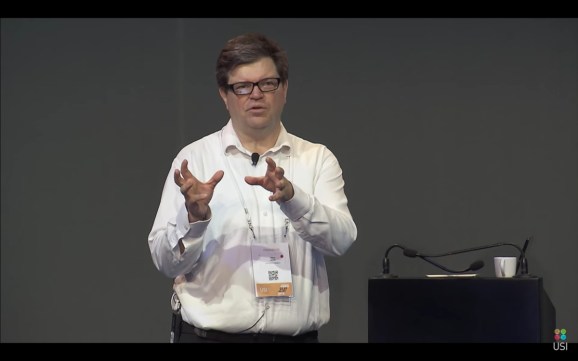 Current deep learning technology is not advanced enough for computers to understand language, a major figure in the field said today.

The ability to learn the way people learn — through observation and experience — is what Facebook will use to teach chatbots and computers to carry on a conversation like a human, said Yann LeCun, the head of Facebook’s artificial intelligence (A.I.) research lab. LeCun spoke about A.I. and steps being taken to make virtual assistant M less reliant on human training at the 2016 Wired Business Conference, as Wired reported.

Humans have played a role in the decision-making process for Facebook’s M since the bot debuted last year, before the launch of the company’s bot platform.

Facebook has been researching ways to make machines understand language more independently. Earlier this month, for example, the company published a paper on key-value memory networks for reading documents. But there’s more work to be done.

As part of these efforts, a number of tech giants, including Facebook, have begun to open up their A.I. technology. And some of the companies giving away A.I., including Microsoft, are also using artificial intelligence to add chatbots to their messaging apps.

Deep learning has played a role in improving speech recognition, image recognition, and machine translation, LeCun said in a conversation with Wired’s Cade Metz. “The next frontier,” LeCun said, is natural language understanding.

“The next challenge will be how we use those techniques to build, you know, intelligent agents, virtual assistants, like M at Facebook, and others, that really understand what people say, what people mean,” LeCun said. “We can build useful systems already, but we have to build a lot of them by hand. We kind of have to hand-script a little bit a lot of what those systems can do, kind of the tree of possibilities that people can say and kind of figure out what to respond.”

One of the ways neural network researchers are trying to figure out predictive learning today is by watching over the shoulders of Facebook employees who help users interact with the chatbot M, LeCun said.

Facebook is using the interactions “to bootstrap a machine learning system to emulate humans,” he explained.