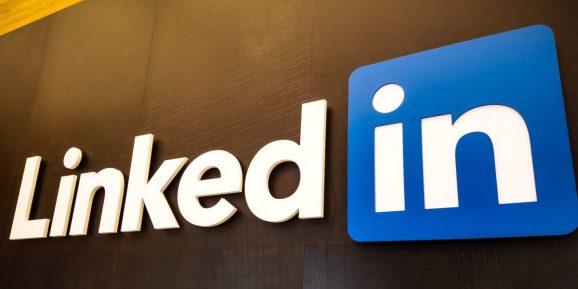 LinkedIn signage in the lobby of its San Francisco office.

No doubt the news that LinkedIn had agreed to be acquired by Microsoft for $26 billion hit every employee of the social networking company like a thunderbolt.

Remarkably, word of the mega deal wasn’t leaked before the announcement. Employees found out along with the rest of the world that CEO Jeff Weiner and chairman Reid Hoffman had engineered the shocking transaction.

Not long after learning of their twist of fate, employees gathered for an all-hands meeting to hear directly from Weiner and Hoffman. After shouldering the drama internally for weeks, Weiner stood before his employees and immediately found himself overwhelmed with emotion, according to a transcript filed with the U.S. Securities and Exchange Commission.

“So let’s start with the facts of that email I sent this morning, I’m going to be touching on many of the same points and just a little preface — if I get a little emotional as I go through the content, please don’t misinterpret it, it is not coming from a place of sadness. I promise you, it’s not,” Weiner said. “Not that there’s anything wrong with that. It is coming from a place of deep appreciation and gratitude to all of you. You know how much — it’s happening already, Jesus, two minutes in. It’s going to be a long all hands.”

“You know how I feel about this company, you know how I feel about all of you, but it is beyond a privilege to be working alongside of you to build what we have built, and we will keep building. If I do get a little verklempt, my team has instructions as always to lob in a really bad joke to reel me back in, hopefully that will work. Speaking of emotion and feeling a little verklempt, some of you in the audience here today are probably going through your own emotional roller coaster. I want you to know it is completely normal and natural.”

“With that, let’s get started, I want to start by saying thank you. Don’t need the joke yet. Thank you for the best job I’ve ever had. We may need a joke now. No, I’m okay.”

After finally collecting himself, Weiner praised employees for how far the company had come. And he explained why he felt their work was still in early stages: A work revolution was at hand that would make LinkedIn more vital than ever.

In essence, Weiner said technology, and robotics in particular, was accelerating in a way that millions of workers would be displaced from their jobs. These employees would need new opportunities and new connections to reinvent themselves, and LinkedIn was perfectly positioned to help them do that — with Microsoft’s help.

“That dystopian future where robots replace people, that has been predicted in science fiction for decades, it’s happening,”  he said. “It has begun. And what amounted to headlines over a three-week period at some point will turn into a torrent of daily news. Whether it is the displacement of individuals and people by virtue of new technologies, whether it is the widening skills gap, whether it is the growing problem with youth-based unemployment, or record levels of socioeconomic stratification, creating economic opportunity will be the defining issue of our time.”

He also talked about his pride in the company’s culture. And as an example of employees’ fidelity, he pointed to the fact that actually quite a few LinkedIn employees had been aware of the negotiations with Microsoft but hadn’t blabbed about it. Weiner didn’t say exactly how many had known about the talks, but he said:

I will give you a shining example, something Satya and I have both been fielding today because repeatedly we get the question, how in the world did this not leak? One of the largest internet and technology deals in history, how did it not leak? And what I didn’t provide them details of was the number of people who have been brought over the wall…When we originally were talking about the number of people, I thought it would be appropriate to bring over the wall, consistent with our culture and values of transparency, open, honest and constructive, I was told you can’t do that, it will leak. It is an inevitability. You bring a certain critical mass of people over the wall, it will leak. And that is the same playing down to the lowest common denominator that we are trying to defy, and sure enough, look at what happened. That is such a special quality. That is a competitive advantage. So we’ve got the what in terms of our mission and vision, the how in terms of culture and values.

Finally, and perhaps most importantly to me, a Duke University alumnus, he explained his business motto, which came from a sports hero of his. Remembering the day of LinkedIn’s all-hands meeting after its IPO, Weiner said:

At the end of that meeting we finished with two words that became our unofficial mantra, you guys remember what was? Next play. For those of you less familiar with the expression, it is a turn of phrase I picked up from Mike Krzyzewski, arguably one of the great coaches in American sports history, I’m not suggesting I endorse the Duke Blue Devils, so please no hissing and booing from people who went to other schools, but I’m a huge fan of coach K, I think the guy is extraordinary, and it turns out unbeknownst to most people, every time the Duke Blue Devils finish a play on either the offensive or defensive end of the court, no matter what happens, he says the exact same thing, next play. Next play. Don’t linger too long on celebrating an amazing 360 dunk, and don’t linger too long on messing up and having the opposing team steal the ball and get an easy lay-up on the other end. Spend one moment to reflect on it and then turn to the next play. This idea of next play, it served us very well then, and it will serve us very well now. So here’s to the next stepping stone. Next Play. Thank you.