God of War was one of the most surprising games to appear at the Electronic Entertainment Expo in Los Angeles, and not for the obvious reasons associated with Sony’s blockbuster action series.

Many fans expected to hear about a new entry in Sony’s mythology-based action series. The franchise has sold over 20 million copies, after all. It wasn’t even all that surprising to see the setting change from Greek to Norse. A calmer, more thoughtful Kratos that fights with, protects, and teaches a young son? That was surprising.

GamesBeat already talked to God of War director Cory Barlog about the demo Sony showed off at E3, one of the largest gaming events of the year. Now, we talk to him about the change in tone for a series that used to be all about anger and bloodlust. 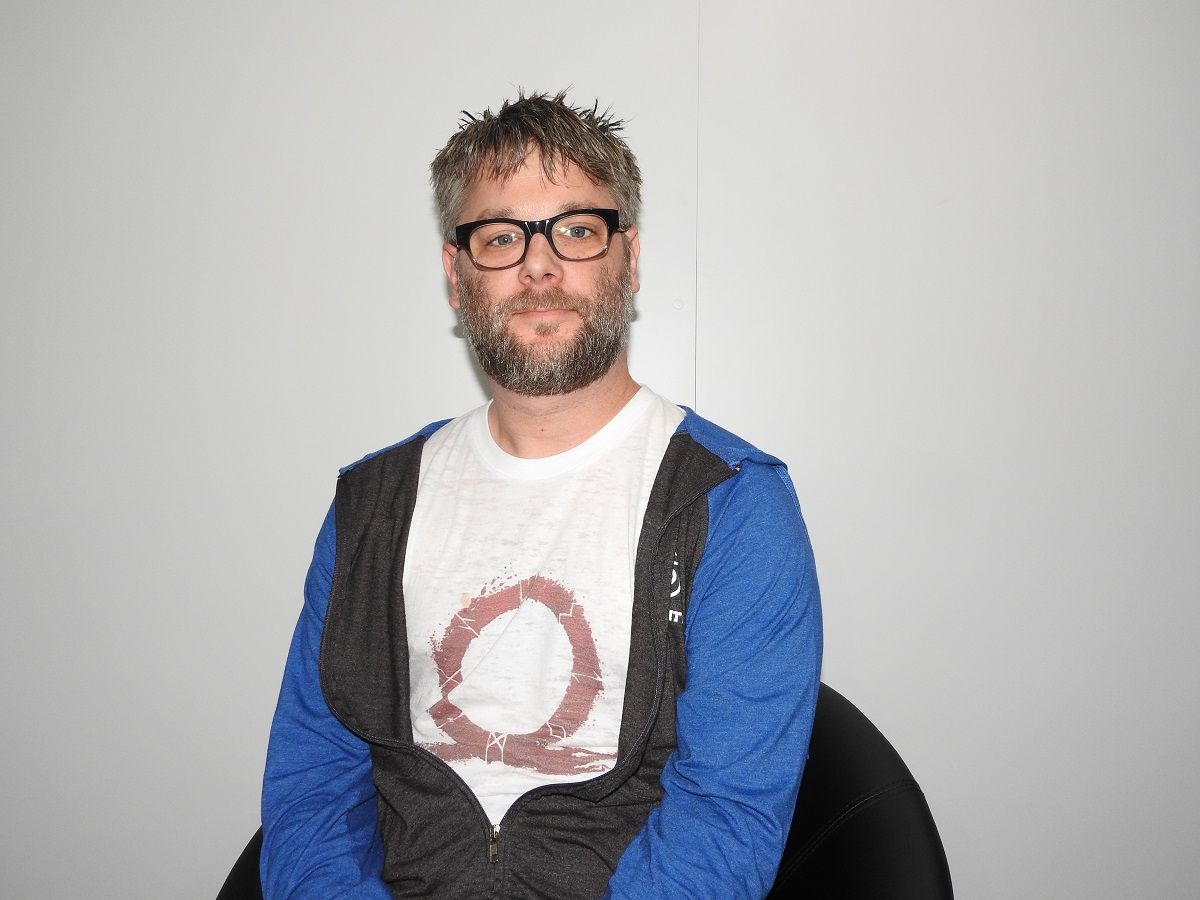 Above: Cory Barlog is creative director at Sony Santa Monica Studio and the game director of God of War.

GamesBeat: I find the tone shift interesting. A lot of people expected a new mythology, but the quieter, more thoughtful tone seems like the bigger deal. Was that something thought out very early in the design?

Cory Barlog: It was a push I had, something I really wanted to get into. I saw a shift in the audiences. I saw that people were accepting bigger games that didn’t have to shout all the time. I thought this was an opportunity for us. It’s cool to get in and be able to tell stories in a much more diverse emotional palette. We were always kind of, “RAAARGH!”

It’s an interesting start for his journey. That first idea, though, was pitching Kratos getting another chance at being a dad. That was the essence of the pitch. People were kind of looking at me sideways. “What are you talking about?” But you start thinking about it a little bit. How would he deal with that? Just saying, “Oh, Kratos wants redemption” is selfish. It’s old Kratos. It’s self-centered. It has no purpose. But this idea — something beyond him is motivating him to change. He’s known for a long time that he needs to change. But the change is coming from not wanting to repeat the mistakes of his past.

GamesBeat: Was there a lot of pushback to that idea at first? Were people saying that Kratos is just a force of nature, just an embodiment of anger?

Barlog: That did come up. “Force of nature,” people did say that. On the design team, we had a core group of 12 people. There was a lot of pushback initially. People said, “This sounds cool, but… .” And then the “but” is always things like, we have big cinematic cameras, we do all these other things. We got stuck in this loop initially of, “This is what we do.”

Probably the really small beginnings of this idea, the germination of this — when I was working at Lucas, I was allowed to go up to the ranch and read the scripts for the [canceled live-action Star Wars] TV show. It was the most mind-blowing thing I’d ever experienced. I cared about the Emperor. They made the Emperor a sympathetic figure who was wronged by this fucking heartless woman. She’s this hardcore gangster, and she just totally destroyed him as a person. I almost cried while reading this. This is the Emperor, the lightning out of the fingers Emperor. That’s something magical. The writers who worked on that, guys from The Shield and 24, these were excellent writers 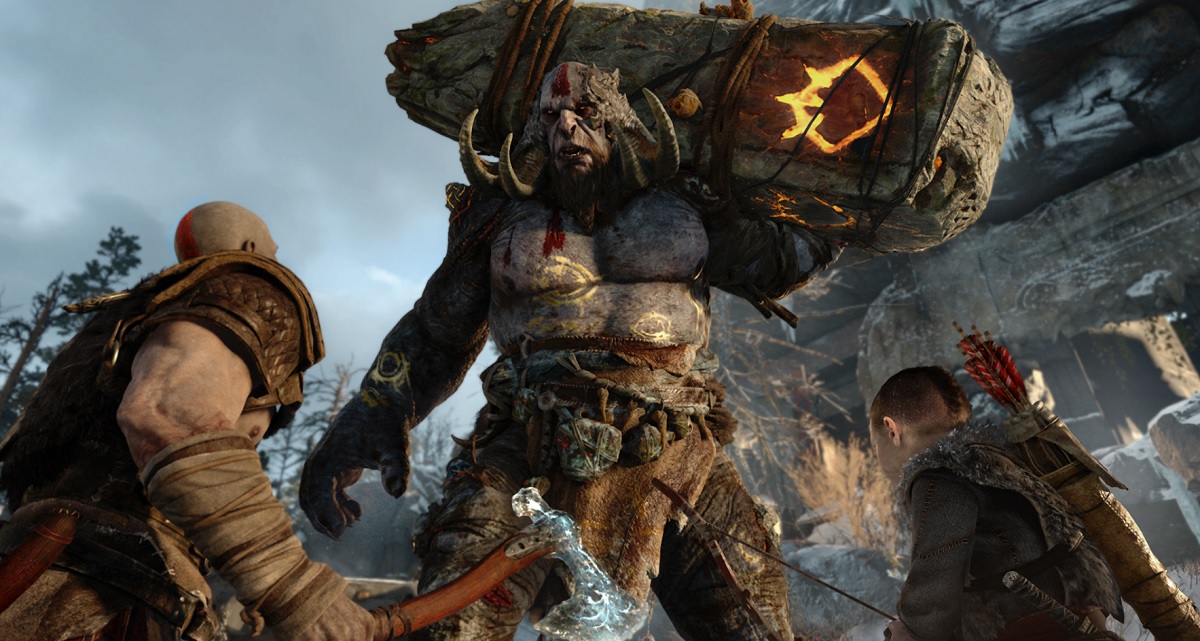 Above: A troll fight in God of War

GamesBeat: That’s not where I thought this would have originated. That’s pretty cool. When you think God of War, you think violence. Is this more thoughtful turn indicative of a progression in the industry in general? Or is that reading too much into it?

Barlog: I don’t know. I mean, we’re getting older. A lot of us who are making games, who came up around the same time, we’re hitting a time in our life in which we see the world through a different lens. Creatively we see things differently because we’re all having kids. We’re all experiencing a change in our lives. We’re all getting to an introspective point where we look back on stupid crap we said to our parents and realizing we’re hearing stupid crap from our kids in just the same way. The audience, I think, wants it as well. To me that’s the best part about it.

GamesBeat: Both God of War and The Legend of Zelda: Breath of the Wild are two very established franchises that are changing things in interesting ways. They’re also two of the most talked about games from E3. But with God of War, it’s not just gameplay. Do you feel a sense of validation, in any case, now that you’ve shown it and seen that positive reaction?

Barlog: Yes. I didn’t sleep for days leading up to this. Tossing and turning. I believed in this with every fiber of my being. I believe in the team I work with. But it doesn’t matter how much belief you have. That voice inside your head that says they’re all gonna laugh at you — I can see a GAF post that just eviscerates this, and a thousand other follow-ups that say the same thing. “Did I make a mistake?” Then I go and re-evaluate every choice, and no, this is what we were talking about, this works. I’ve re-watched it over and over again.

I wasn’t nervous about playing it in front of millions of people. Didn’t bother me at all. What bothered me was, what are they going to say afterward? We did it so many times in rehearsal to an empty theater, so I kind of got used to it, though. I’d finish up and one person would clap, right? That awkward moment from high school. And then we’d move on. I’d be ushered off so I couldn’t see anything else from the show.

But man, sitting out there in the balcony, people stood up. They were clapping for that. That was unexpected and amazing.