Minecraft has a storied modding scene, but you’ve primarily had to play on PC to enjoy those up to this point. With its new add-ons, Mojang is bringing that magic to players on smartphones.

The Minecraft developer announced at the Electronic Entertainment Expo tradeshow last week that the new add-ons feature is coming to Pocket Edition and Windows 10 Edition this fall and will enable players to remix everything in the game. Microsoft and Mojang demonstrated how this worked for GamesBeat at E3.

This is how you’d get an alien: The process is as simple as drawing up new character skins in Paint for Windows and editing some text files to give zombies pointy ears, projectile weapons, and other slight changes to their artificial intelligence. Microsoft wants to hand this power over to everyone playing Minecraft, and it also wants its fans to know that this is safe. 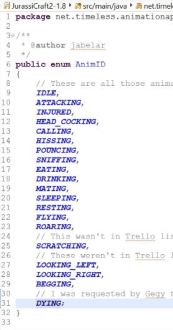 Above: An example of a .JSON file.

The files, which are in the JavaScript Object Notation (.JSON) format that uses plain-language values that humans can easily parse and edit, contain the behaviors for each character in the game as well as things like their size and speed. Mojang is exposing all of this data, and that means you can now take one behavior from something like a zombie and put it into a rabbit. In one demonstration, Microsoft showed us how players can take a chicken and make it explode by adding that specific character trait from the creeper mob. After copying and pasting that behavior (which you’ll have no trouble finding in a .JSON editor) from the creeper to the chicken, you’ll basically have a self-frying bowl of KFC walking around your Minecraft world.

In another example, Microsoft took the ghost-like Ghast mob and turned it into a UFO to help flesh out a series of mods it was making for an alien-invasion scenario. This is a bit more complicated than making a chicken explode, but the development team is adamant that it expects kids to pick up these skills quickly now that they have unfettered access to Minecraft’s files.

“It’s really not that difficult,” Minecraft senior producer James Webster told GamesBeat and a small room of other reporters. “It’s just a matter of creating the geometries, which is just a bunch of points in space. And then adding the textures to that. It’s really simple to make these massive changes. Add-ons, we hope, are going to encourage people to be super creative. It’s a simple thing to change things, but then they can take things a step further by remixing all of these elements to come up with brand new ideas.”

Add-ons can change the look and behavior of anything in Minecraft. And the key here is that you don’t need to go and download a bunch of extra software or tools to start making your own content. Instead, all you need is a text editor on a PC or your smartphone to edit Minecraft’s .JSON files. If you want a bit more guidance, a .JSON editor can help. With that kind of tool, you can go into the .JSON for the creeper and find where it mentions its speed and change the number in the brackets as low or as high as you want. It’s that simple.

At E3, Microsoft demonstrated its alien invasion in action:

Microsoft is focusing on making this super-easy for anyone, and it also wants people to feel confident about making changes to their games without the fear that they’ll break something.

“This is safe because you’re just editing text files,” said Webster. “Literally, all you have to do is delete your new files, and the game will default back to its original state.”

Webster also wants to let people know that Mojang and Microsoft have thought about this effort in an all-encompassing long-term way.

“It’s going to be cross-platform on Windows 10 Edition and Pocket Edition,” he said. “You can share your add-ons. You can create a Realm and bring in your add-ons so that everyone who jumps on your server will see the same modifications as the host.”

Microsoft is also promising that these add-ons will not go out-of-date. On PC, a lot of people run old versions of the game because certain mods wouldn’t work. Add-ons is built in a way to address that problem. Anything you build for the game using the add-on method should continue to work in Minecraft forever and — eventually — on all versions.

“For right now, we’re focusing on the Win10 and Pocket Edition,” said Webster. “Our long-term goal is to have this kind of customizability across all of our platforms.”

Finally, Microsoft is on an interesting path with Minecraft, where it could turn its massive player base into a connected economy of content creators. If you build the exact UFO I want, you can share it with me, but not sell it to me. When I asked the company about something like a player-created-content marketplace, it didn’t say no to the idea. But it also made it clear that if it were to pursue something like that, it wouldn’t happen for quite some time and the company is in no hurry to replace the many Minecraft skin servers that already exist.

“One step at a time,” Minecraft producer Saxs Persson told GamesBeat. “First, we open it up. Next, get it so everyone is playing the same version of the game. That’s not currently how it works. Then, in terms of sharing, we’ve already seen — with skins, for example — there are fantastic skin servers that we could never replicate. They have the editor, the sharer, the rating — we’d much rather, in the beginning, have the community figure out how they want to share rather than us dictate it.”

When pressed about whether Microsoft has any plans for a Minecraft marketplace at some point in the future, Persson again would only say that they don’t have anything planned today.