Video is everything to social networks these days, and as Snapchat, Facebook, and YouTube battle it out, Twitter doesn’t want to get left behind. Today, the company has made it so you can create longer videos — up to 140 seconds — and tweaked its Vine app. What’s more, to appeal to creators, it has launched its own version of Facebook’s Mentions app, called Engage, which allows creators to better manage interactions with their followers.

As Twitter CEO Jack Dorsey explained in the company’s Q1 2016 shareholder letter, one of the main priorities for the year is engaging creators and influencers. This latest move is designed to entice them to use the service more, which may in turn draw more users back to Twitter.

Video support came to Twitter in January 2015, with a limit of 30 seconds of footage. Today’s increase in length gives Twitter an advantage over rival app Instagram — in March, the Facebook-owned service changed from 15-second to 60-second videos. Twitter’s 140-second time limit is undoubtedly an homage to the 140 characters the platform is recognized for.

The way to view videos is also being changed. Twitter has introduced a new browsing experience to improve discovery of videos and Vines. If you tap on a video in the timeline, it’ll activate a full-screen interface that will also suggest other video tweets you might enjoy.

And this video update also extends to Vine. The company said that starting with a “small group,” select creators will be able to incorporate longer videos into their 6-second Vines, which will, in essence, serve as trailers for a bigger story. If you see a label marked “watch more” and tap on it, you’ll be able to view the full-length video behind it. We’ve been cautioned that not everyone will immediately see this feature.

Twitter is betting that this will open up monetization opportunities for creators and that soon the so-called “Vine stars” will be able to make more money off of their work.

Oh, and as a bonus: Twitter has broken free from the box ratio for Vines, just like Instagram did with its format last year. Although you can still elect to make traditional Vines, the company has added support for landscape mode.

Now that creators have the ability to express themselves in a longer format, it’s time to manage interactions, and this is where Twitter Engage comes in. This standalone app will inevitably draw comparisons with Facebook’s Mentions as it provides “down-to-the-second” analytics on tweet performance, provides curated recommendations to identify optimal ways to engage followers, and gives an overview of influential mentions, replies, follows, and more. 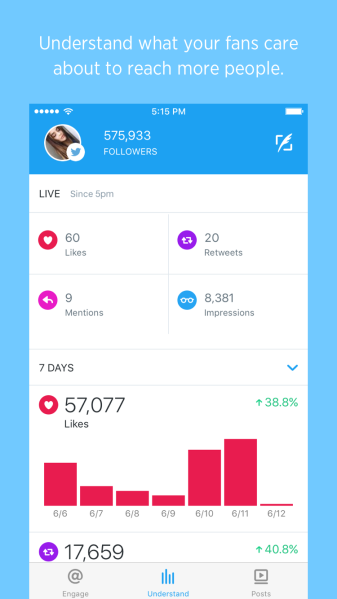 Above: Twitter's Engage app showing analytics about when interacting with you.

For the average Twitter user, simply having access to a timeline, mentions, and direct messages is usually enough. However, for celebrities and brands eager to maximize their return on the service, having a standalone application is appealing.

Some will immediately note that Twitter is following the same path Facebook took months ago with the launch of Mentions and the addition of lengthier videos. While this may be true, these updates are part of Dorsey’s ongoing strategy to draw people back to the service and build on the user momentum that Twitter started seeing last quarter.