Consumer interest in virtual reality goes far beyond gaming, according to the latest research from Greenlight VR. In addition to games, consumers want to use VR for travel, entertainment, events, home design, and education.

The market research company also said in its 2016 Virtual Reality Consumer Report that consumers are less interested in paying a lot for VR now than they were back in October. And the survey said that the top VR device that consumers want now is the Samsung Gear VR, followed by the PlayStation VR.

(We are having a panel on “AR/VR beyond gaming” at our GamesBeat 2016 event in Rancho Palos Verdes in Los Angeles. So far, the panelists include Jules Urbach, CEO of Otoy and Sylvio Drouin, executive vice president of Unity Labs at Unity Technologies.) 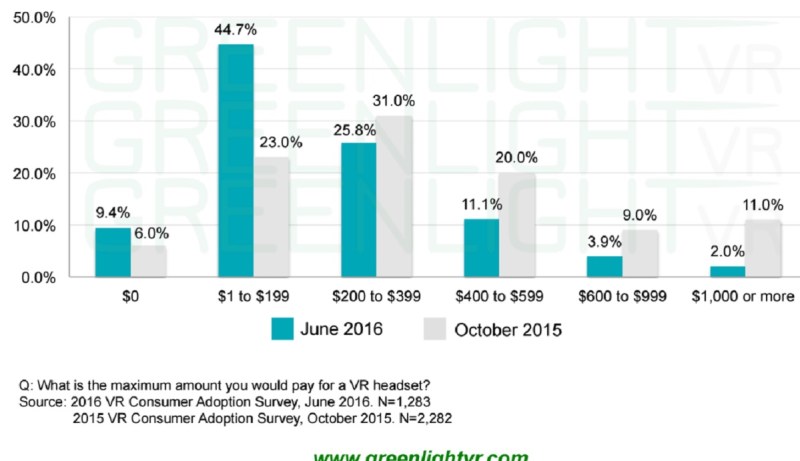 Above: Consumers don’t want to pay as much as they once did for VR.

Greenlight VR surveyed more than 1,200 people about their personal interest in VR categories. Gaming ranked sixth among the categories, with 61 percent of respondents saying they were interested or very interested in virtual reality gaming. The top six use case categories identified by consumers were travel, tourism, or adventure (73.5 percent); movies and recorded videos (67.3 percent); live events (67.0 percent); home design (65.9 percent); and education (63.9 percent). 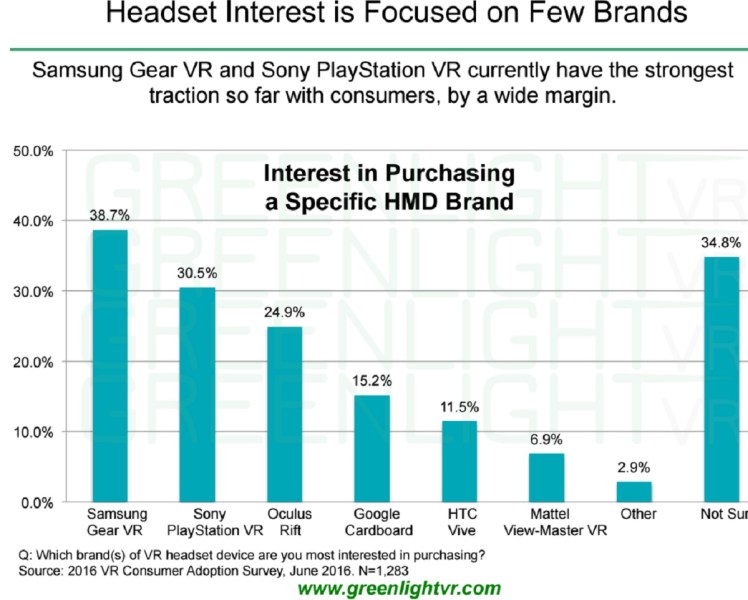 Above: Greenlight VR says the Samsung Gear VR is in the most demand among VR devices.

“Virtual reality has always been more than a medium for gaming experiences and consumers understand that,” said Clifton Dawson, CEO of Greenlight VR, in a statement. “Our findings from multiple studies suggest that some players in the VR ecosystem may be overly focused on gaming. The reality is that consumers have a wide variety of interests for using virtual reality. Platform and content providers would be wise to consider these bigger, richer findings as they develop their content portfolio and marketing strategies.”

“Overall, we were struck by the strongly positive and broad interest in VR in general, and in specific uses in particular,” said Steve Marshall, senior vice president of research and consulting for Greenlight VR, in a statement. “Given all the attention in the press, we expected to find gaming as the primary consumer interest in VR. The reality is that consumers have a wide variety of interests for using VR — starting with travel and adventure.”