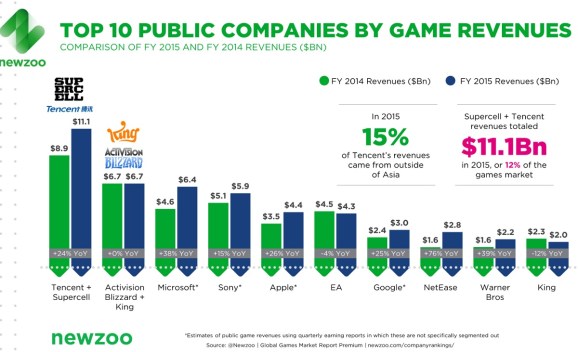 With the acquisition of most of Supercell, China’s Tencent will have an estimated 13 percent of the global $99 billion game business in 2016, according to market researcher Newzoo.

“This is certainly a good deal for Tencent,” said Newzoo CEO Peter Warman in an email. “It solves a huge strategic problem and provides immediate additional revenue potential. This year, Supercell is on track to make over $2 billion outside of Asia. This is significantly more than the $1.3 billion Tencent made outside of Asia last year, the majority of which came from League of Legends. Tencent will now finally make serious mobile revenues outside of its home turf.”

Combined revenues from both companies totaled $11.1 billion in 2015. This is 12 percent of all game revenues generated globally last year. If their year-on-year growth continues at a similar level, the new venture will generate around $13.0 billion this year, or 13 percent of the world’s games market.

By comparison, Activision Blizzard (in which Tencent owns a stake) and King made a combined $6.7 billion in 2015. League of Legends, by Tencent-owned Riot Games, is a big source of revenues. But aside from LoL, Tencent has been struggling to grow its revenues outside of China, Newzoo said.

But now the $1.3 billion it generated outside of Asia last year, will now easily be doubled and possibly tripled, Newzoo said. Thanks to games like Clash of Clans and Clash Royale, Supercell is the No. 1 grossing game in China, Newzoo said.

“The immediate opportunity comes from  the Android ecosystem in China, representing around two-thirds of the Chinese mobile market,” Warman said. “Clash Royale is one of the best performing games on iOS in China and has just recently launched on Android in the third-biggest store in China: 360 Mobile Assistant. Tencent’s MyApp store is the biggest. Though it is not written in stone yet that Kunlun will no longer publish Supercell games, it seems obvious that Tencent will take over. Using Tencent’s store and QQ community represents an immediate $1 billion+ opportunity for Supercell’s portfolio in China, particularly Clash Royale.”