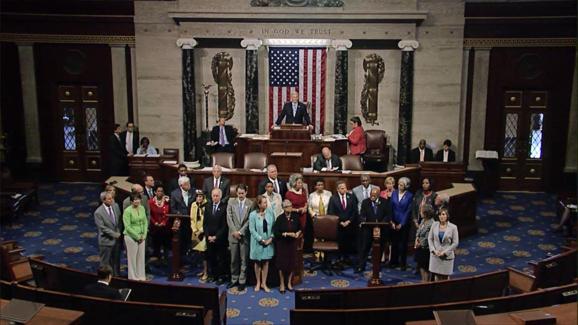 U.S. House Democrats begin their sit-in protest of no gun control measures being voted on in the chamber.

Earlier today, Democratic lawmakers in the U.S. House of Representatives voiced their protest over not being able to vote on gun control legislation. Presiding Congressman Ted Poe (R-Texas) quickly called for a recess and ordered video cameras in the chamber to be turned off in the hopes of quelling the protest. It didn’t work.

Today’s event supports what social media networks like Twitter have been talking about for so many quarters — that they’re places for live events and conversations. Realizing that the cameras had been turned off, congressional Democrats demonstrated that they had the next best thing at hand: a way to broadcast their protest using just their mobile device.

On the House floor, Congressman Scott Peters (D-California) remarked that as the cameras in the chamber were turned off, Democrats found another camera by way of an app: “Today, I discovered Periscope.”

I'm on the House floor with @repjohnlewis & Dems staging a sit-in to demand action on commonsense gun legislation pic.twitter.com/byIivby5gG

Twitter-owned Periscope and Facebook have played a big part in helping Democrats get the word out about their protest. These tools have given them the ability to reach their constituents and control the message of their protest.

“Today is an example of what drives us,” said Periscope CEO Kayvon Beykpour in a statement to VentureBeat. “Twitter and Periscope take you where other cameras don’t — letting you experience breaking news through the eyes of those living it.”

Periscope marked the protest by creating a dedicated channel people could use to follow the #NoBillNoBreak event as it unfolds.

We are united! Democrats sit-in for an end to gun violence! #NoBillNoBreak pic.twitter.com/l2WtTmUToS

While House Republicans may have thought that disabling C-SPAN’s broadcast of the protest would solve things, all evidence is to the contrary.

Both Facebook and Twitter are pretty much locked in a battle over live events, with the former putting forth lots of resources to show it’s the top dog. However, Twitter isn’t backing down and has made it the company’s mission to show that its vision is central to the debate — company CEO Jack Dorsey has refuted Facebook’s efforts, saying that Twitter has been doing “it for 10 years.”