As the human race prepares to shed the tissue and fluids of its bodily form in exchange for oneness with the metaverse, the U.S. Federal Communications Commission is promising that Net Neutrality will apply to online VR worlds like it does to the rest of the internet.

But FCC chairman Tom Wheeler acknowledges that VR and AR will introduce new problems, primarily to privacy, that his regulatory agency is already trying to learn more about. 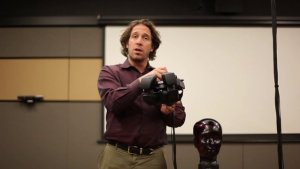 Above: Jeremy Bailenson with his VR headset in Standford’s VHIL.

Last week, Wheeler paid a visit to Stanford University’s Virtual Human Interaction Lab, and Jeremy Bailenson, the professor and VR expert who oversees VHIL, answered the chairman’s questions about the technology, according to Stanford News. Before Wheeler got into privacy, he talked to Bailenson about the potential bandwidth needs of 360-degree VR video and simulated worlds before confirming that he believes Net Neutrality should apply to VR as well.

“Virtual reality shouldn’t have gatekeepers,” said Wheeler. “It starts with an internet that is fast, fair, and open.”

But considering the U.S. appeals court in Washington D.C. upheld the FCC’s Net Neutrality rules as the law of the land, that’s a problem that’s already solved. When it comes to privacy in VR, Bailenson detailed some of the potential tracking technologies that many people might never even consider.

In one example, Bailenson talked about how VR systems can track a person’s every tiny movement. A company could potentially use that data to create a “virtual footprint.” VHIL has already done experiments that prove software can identify people based on those movements. This could create a scenario where businesses, marketers, or governments could track you across multiple connected online games even if you register anonymously.

That kind of information is powerful, and it’s potentially something the FCC could attempt to regulate. I’ve reached out to Wheeler and the FCC for further comment on this subject. I’ll update this story with any new input from the agency.

But by reaching out to Bailenson, Wheeler is showing a proactive attitude toward VR. I’ve written previously about how virtual reality could have a profound change on the way humans deal with death, sex, violence, and identity. And it was Bailenson who told me that VR is like nuclear energy: it has the power to power cities or destroy them. A living, breathing, and engaged FCC chairman is the start of ensuring we get as much of the good from this new technology with the fewest of its drawbacks.