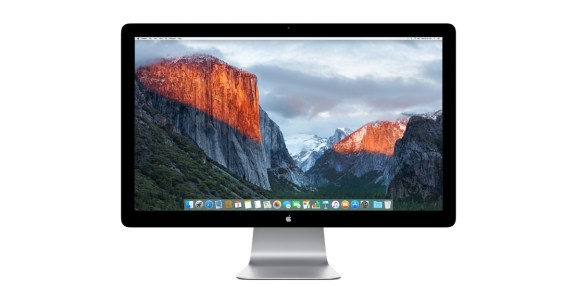 Apple today confirmed that it will stop selling the Thunderbolt Display, a desktop monitor that was first introduced in July 2011.

It’s the only first-party display that Apple sells, and while there have been rumors suggesting that the company will be following up with a new display, it isn’t saying anything about a new product today.

“We’re discontinuing the Apple Thunderbolt Display,” a spokesperson told VentureBeat in an email. “It will be available through Apple.com, Apple’s retail stores, and Apple Authorized Resellers while supplies last. There are a number of great third-party options available for Mac users.”

When the original Thunderbolt Display was released — with its MagSafe connector, FaceTime HD camera, microphone, FireWire 800, Gigabit Ethernet, and Thunderbolt ports — it carried a $1000 price tag. These days, the 23.5-pound product goes for $950. But not for long.

If you review Apple history, you’ll realize that the company has been in the standalone display business for a very long time — since 1980, with the release of the Apple Monitor III. Altogether, Apple has come out with more than 50 displays in its 40-year history. In that context, it doesn’t seem crazy to figure that the company will release a new display.

It would just be a matter of when.

Dear @apple. Where is my USB-C cinema display? Sincerely, all of us who bought a MacBook. @tim_cook @jordannovet @appleinsider