GamesBeat has partnered with iSpot.tv, which measures TV advertising in real-time, to bring you a monthly report on how gaming brands are spending their ad dollars and which are generating the most digital response. Below are the top five most engaging gaming industry brands from May 16 through June 15. 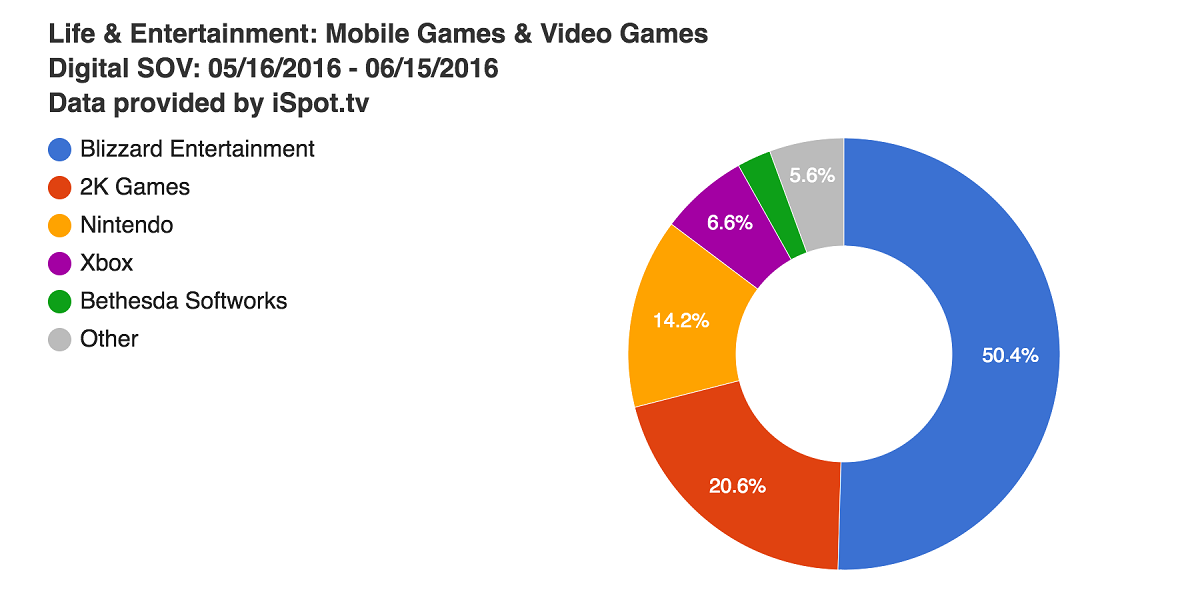 We saw quite the shake-up this month in terms of response to gaming TV ads. Former champion Bethesda Softworks slipped down the ranks into fifth place, with just about every other brand’s response increasing significantly. Still propelling off the back of Overwatch, Blizzard Entertainment’s ads generated over 50 percent of the digital engagement gaming TV ads have received during this period.

Closing out a colossal month for both engagement and spend, Blizzard Entertainment is the clear winner for this period, generating a whopping 50.44 percent of the digital response to all gaming ads on national TV. With an estimated media spend of just under $9 million, the brand ran 6 spots nearly 3,000 times across 28 networks and 435 shows. These ads generated over 11 million views online and nearly a half million social actions, with overwhelmingly positive sentiment. The brand’s top ad, “Your Watch Begins,” ran during the NBA post-season and Finals, as well as on Cartoon Network’s Adult Swim.

Jumping up the chart, 2K Games closed this period in second place, accounting for 20.6 percent of the industry’s digital response to TV ads. Running just three ads for three different franchises less than 200 times, the brand generated over one-fifth of the industry’s digital engagement with less than 2 percent of the industry’s spend. These airings returned nearly 29 million impressions on TV and generated over 5.5 million views online. The brand’s most responded to ad, “Pre-Order Trailer,” promoted the newest edition to the WWE 2K17.

Nintendo had a slow start, not running any ads on TV for the first six days of this period. However, the brand picked it up rapidly, airing over 18 times a day for the rest of the month and generating over 129 million impressions on TV. The brand’s top ad, “Jump into Battle,” accounted for nearly half of those impressions. With less than 1,000 commercial airings, Nintendo managed to rack up 14.2 percent of the industry’s digital engagement, targeting primarily children’s programming. The focus of its spend went toward the latest edition to the Kirby franchise, Planet Robobot.

Xbox returned to our television sets to remind you about its best-selling console, the Xbox One. With an estimated spend of $2.4 million, Xbox managed to drum up 6.61 percent of the industry’s digital response. Airing only one spot nearly 550 times, the brand pushed “Consider the Facts” during primetime programming such as the NBA Finals, American Grit and the 2016 Copa America Centenario, and in turn brought in over 2 million views online. In total, this ad generated over 74.8 million impressions on TV.

Bethesda Softworks closes out our leaderboard, slipping into fifth place for engagement compared to the brand’s throne on last month’s leaderboard. Though spending less than Blizzard Entertainment, the brand is still a top spender for the industry, bringing in over 15 percent of the bacon for networks while utilizing only 2 commercials. On the engagement side, the brand’s ads are still getting positive reinforcement from the game community, with over 19,000 social actions taken in response to these ads with 98% of those expressing positive sentiment. Though only accounting for 2.53 percent of the industry’s engagement, these 2 ads generated nearly 75 million impressions on TV.