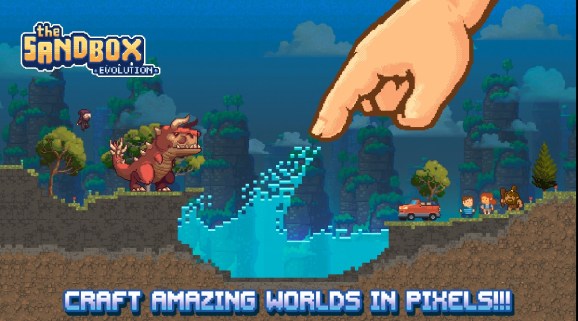 Sandbox Evolution is the follow-up touchscreen game to The Sandbox.

Indie game studio Pixowl had a nice hit with its The Sandbox, a user-generated content game where you can create just about anything with pixel art. It was downloaded more than 16 million times and generated $5 million in revenue since 2012. Now the San Francisco company is following it up with with The Sandbox Evolution, and it has already been downloaded a million times in three days.

The sequel to the 2D pixel-art world-building game has debuted on iOS and Android. Pixowl is pitching the game to “makers” who want to create, share, and play original games.

The original Sandbox — where you just tap the screen, mix elements, and create — is still adding 5,000 new players a day. So far, people have created more than 1.5 million online gallery worlds (which players can upload and share with others). The top country for downloads was the U.S., with more than 5.7 million, followed by the United Kingdom at 850,000 and China at 806,000. The demographic skews about 84 percent male, with most of the users from 13 to 24 years old. But there are a healthy number of women, ages 25 to 34, playing a well. Players have logged 120 million hours to date in the world. And the game still has 1 million monthly active users. All those numbers scream out for Pixowl to further exploit the franchise with a sequel.

Since 2012, Pixowl managed to create 45 updates for the game, which has 300 elements and 29 campaigns. Now Pixowl has grown to 35 employees.

“The Sandbox Evolution ignites the imagination and empowers the player to become the maker,” said Pixowl CEO Arthur Madrid. “With a universal retro-style, fantastical elements, and a game maker feature, this new Sandbox is an engaging platform that appeals to world-builder fans of all ages.”

The Sandbox Evolution empowers players to craft worlds or destroy universes and also lets players create their very own games. Earlier in June, Pixowl announced a partnership with Bandai Namco that will bring classic game characters such as Pac-Man to future updates. The sequel gives players more freedom and creativity. It has improved physics and side-scrolling worlds 10 times bigger than its predecessor.

Players pick from a variety of characters and heroes to build worlds and choose from over 170 elements and design with various entities, game-making blocks, platforms, enemies, portals and characters, pixel art drawing colors, and more. Once a new world has been created, players can share them in the online gallery or create a retro-style platformer level with a brand new easy to use game maker.

Sebastian Borget, cofounder, said in an email that the original the Sandbox was made in less than six months with 30 basic elements.

“Players began to make very impressive creations, such as pixel art and electricity simulators — things that nobody on our team had thought were possible,” he said. “The community actually hacked the game to create their own creative worlds. As we embraced this reaction, we also saw The Sandbox community [Facebook and YouTube] grow really fast.”

The new game is a bigger and better version, Borget said.

“This new version is an evolution of our original vision as it enhances players abilities to further empower their “makers” within – and create, share, and play,” he said.

Players can now create their own games and controllable heroes. As for comparisons to Minecraft, Borget said, “We love Minecraft as it offers a disruptive way to play – hours spent creating and exploring possibilities. It paved the way for a new generation of games, based mostly putting the player first as the maker and on user-generated content. The Sandbox is a complementary platform – we value Players as the Makers and offer the community a 2D touch system that enables the creation of worlds pixel by pixel. With the The Sandbox Evolution, we move beyond the creation of worlds and offer players the ability to create and share complex platformer levels and challenge their friends.”

The game is also coming in July on the PC via Steam Early Access. Pixowl was founded in 2011, with a headquarters in San Francisco and development studios in Buenos Aires, Argentina. Its other titles include Peanuts: Snoopy’s Town Tale and Garfield: Survival of the Fattest.

“We have developed and launched The Sandbox Evolution to bring more to our community as well as attract new members,” Borget said. “It has been four years since the launch of The Sandbox. Over those years, the game became technically limited and we were confronted with some roadblocks and restrictions on what could be done versus what we wanted to offer as an experience to the players. As we all know, four years is like an eternity in the lifetime of a mobile game and for additional, multiple other factors (partnerships, marketing, game design), we knew it was more appropriate and time to launch a new game.”

He added, “As such, we have created a game that we hope will sustain a lifespan of 5+ years. We decided to start over from scratch and prepare the community for the transition to the new version. The Sandbox Evolution is a creative gaming platform where #Players are #Makers, sharing pixel worlds, pixel art, game levels, music & much more! We pride ourselves on providing our community with new ways to innovate and to create – and Evolution does just that.”

Above: The Sandbox results