Anki has a big hit with its iPhone-controlled Anki Overdrive race cars that use sophisticated artificial intelligence. And now it has its second act in the form of a cute, smart A.I. toy robot named Cozmo.

Cozmo is a playful, intelligent, and seemingly sentient being that is aware of people and its surroundings. It is a labor of love for San Francisco-based Anki, which has worked on 45 different versions of the toy over the past four-and-a-half years. You could think of Cozmo as something like Eve the robot in Pixar’s Wall-E animated film. I saw a demo of the toy, and it has a mind and personality of its own.

Using the computing power of a connected iPhone, Cozmo can recognize a face or detect when it’s about to roll off a table edge. It can also play simple games and stack blocks.

“Cozmo is a real-life robotic character,” said Hanns Tappeiner, cofounder and president of Anki, in an interview with GamesBeat. “We asked ourselves a question. ‘If you take a robot you see in movies and make him real and physical, what would he do?'” 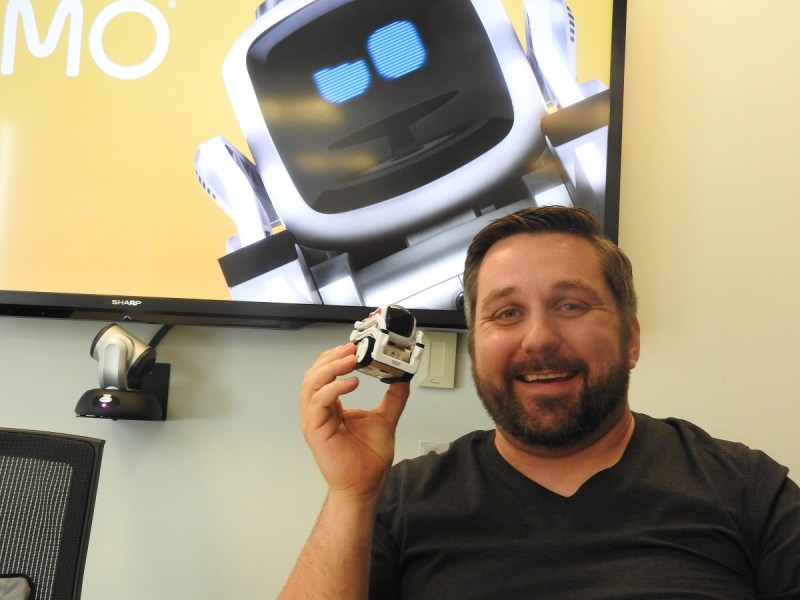 Under the hood, Cozmo is very sophisticated for a robot. It was developed by a multidisciplinary team of PhD roboticists, veteran animators, renowned game developers, and a lead designer of the Batmobile. It is a product at the intersection of film, toys, video games, and robotics. 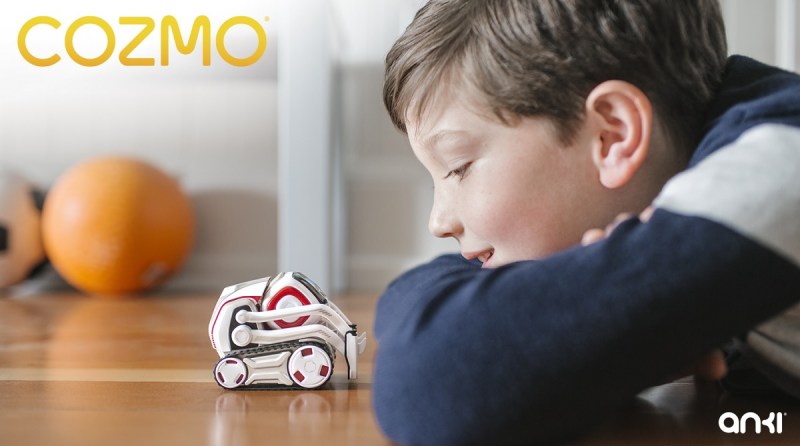 Powered by advanced robotics, A.I., and computer vision, Cozmo has a brain that processes more data per second than all the Mars rovers combined. Robots with comparable capabilities are found in labs for thousands of dollars and stand several feet tall. More than 300 parts make up this robot that fits in the palm of your hand. I got a look inside Cozmo and saw lots of tiny gears.

Cozmo has a color display that represents its face, and you can see its expressive eyes, which light up if it sees a familiar person. Its built-in emotion engine produces a variety of expressions on its face. Cozmo also has its own voice and language, as well as a dynamic soundtrack that matches his mood and corresponds with games and activities.

In setting up a demo, Tappeiner said, “I don’t know exactly what will happen in the demo. That is because his model is set up after the behavior of live beings like pets.”

Cozmo started on its charger. Then Tappeiner woke it up. It rolled over and detected the end of the table. Cozmo scans its environment constantly. If it picks up a block correctly, its confidence will go up. Tappeiner put a small crate on the table and Cozmo got excited. It picked it up and stacked it on another box. We also played a game where you have to tap the box if the colored lights on both boxes match. The one who taps the boxes first gets a point. Cozmo beat me the first time, and then I beat it the second time.

It took a long time to get it right. The team looked at big robots, but it wanted the toy to move fast. Big robots that move fast can be dangerous, so the team downsized the design. The final design is made from 340 parts, and it has four motors, a camera, and an OLED display. That’s a lot of stuff for something that behaves a little like a cat. When you put Cozmo on a charger, it goes to sleep and snores.

“Our animation studio director came from Pixar, but our inspiration came from a lot of different robots like R2-D2, Short Circuit, and Wall-E,” Tappeiner said.

Cozmo works with an iOS or Android device. It will debut in the U.S. in October for $180. That’s a pretty low price for a toy robot that is packed with a lot of smarts and sensors.

Anki recently raised $52.5 million from J.P. Morgan, and it has raised $185.2 million to date from investors that include Andreessen Horowitz, Index Ventures, and Two Sigma. Players have logged in 3.2 million hours of gameplay, driven more than 2 million miles, and built nearly 55,000 different track configurations on Overdrive to date.

More robots could come in the future, as “Cozmo is just the first in an ecosystem of characters,” Tappeiner said.