Miller’s newest game, Obduction, raised $1,321,306 on Kickstarter, and follows in the legacy of Miller’s Myst and Raven, two now legendary PC puzzle games. Combined, the two hits have sold over 12 million copies are among the best-selling PC games in history.

For a game like Obduction (launching on PC, Mac, and Oculus Rift on July 26) where exploration and getting lost is part of the appeal, it can be tough to judge off of only a short demo. Obduction intrigues me, but I’m not sure how otherwise strongly I feel about it. It didn’t blow me away, and in the days at important Electronic Entertainment Expo trade show since playing it has shifted to a game that I think fans of the series will enjoy, but not one that I’m dying to jump back into.

The demo starts off with you stranded on a planet called Hunrath. The picnic bench (from the short clip before the demo, I was told) still sits next to you. As you walk forward, you end up on a world that starts to look more and more like it could be Mars.

The trademark Myst puzzles are here — I got stuck in one area where I needed to figure out how to proceed past a giant rusty gate (the lever right in front of it wouldn’t open it) — and Obduction presents a mysterious world that you have to uncover. Miller mentioned that it includes a deep story, but said that the game wouldn’t be heavy-handed with it, instead slowly revealing it over time.

An odd hologram of a man soon greets you. You aren’t the only one who has been pulled here before. The hologram implies he is welcoming you to a bustling and thriving metropolis, an image that clashes with the landscapes around you.

It pokes you to follow a trail to a picket fence. There, another flickering hologram tells you to be worried, and it soon becomes quite clear that things aren’t as they seem.

Later, I found a man who was locked in something reminiscent of either a bomb shelter or a radioactive chamber, who asked me to get the power lines up and running.  He also, forbiddingly, refers to this place as a prison. Well, there you go.

Oh, yeah, and there’s something going on with red and blue lasers, too. Not quite sure about that. Mystery!

For the VR demo, I was on another planet: Kaptar. This one included ancient ruins inside mammoth rock structures and ancient technology that I didn’t quite have time to get powered up.

VR does add a sense of scale to Obduction, but it comes as the cost of graphical richness and fidelity. Especially playing the two demos back-to-back, the difference in the resolution between a computer screen and the Rift are quite noticeable. You’ll have to make a trade-off when deciding which version to play. For me, I would gravitate toward the better-looking PC version.

“We designed it so it would play well in both,” Miller said. “So, I’m not sure that we’re breaking new ground, but I’m not sure we meant to. We meant to provide that similar Myst experience but in a whole new way, in a new place.”

Rand mentioned how VR had other added side effects. He knows the world inside and out, but he feels VR slows down the exploration experience.

“If what we’re building is a world you’re enticed to explore better, VR is [a ] really interesting tool for that,” Miller said.

Also, somewhat inherent to the medium, Obduction in VR used a warp travel system for exploring to help alleviate the problems players have when navigating in VR-space. Little nodes will appear when you are looking in the right spot, and you can warp to those, instead of having to actually walk. 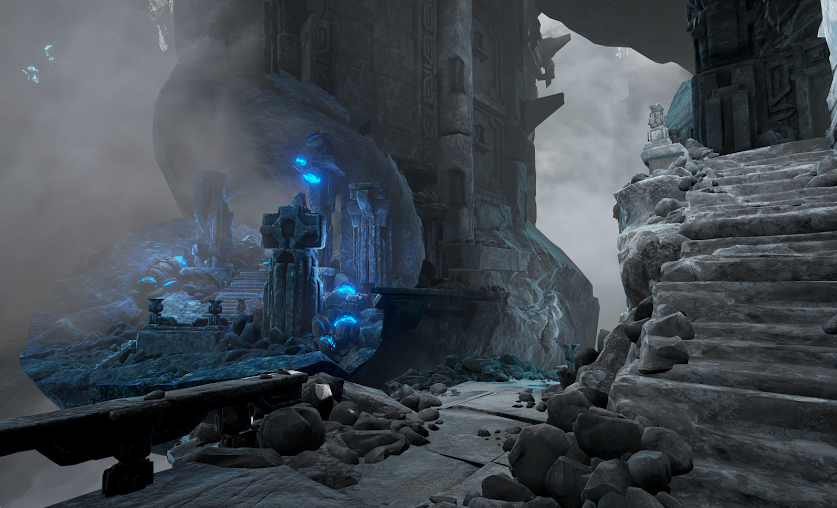 Above: Obduction is the latest game from the creator of Myst.

I wasn’t a big fan of the node system, as it seems to limit exploration instead of fostering it, something crucial for a title like this — but they did note that players will be able to freely roam in the full game, though that could also present problems with VR motion sickness. Miller mentioned that it makes him sick, but that some people can stomach it.

They are also experimenting with other ways to navigate in VR, including steps and marked pathways instead of nodes. It will also have customizable options, as well.