The Beast is now the star of WWE’s money-making game series. 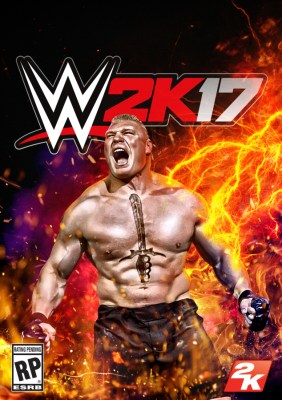 Above: The Beast is the cover star.

2K revealed today that Brock Lesnar is the cover athlete for WWE 2K17, the next installment in the publisher’s annual game series based on the top professional wrestling company. It hits October 11 for PlayStation 4, Xbox One, PlayStation 3, and Xbox 360. The series is a consistent best-seller, with total sales for the franchise reaching over 60 million since 2000. While it’s not the phenomenon it was in the late ’90s, professional wrestling has remained popular. WWE’s brand stretches beyond the ring to games like this and animated movies co-starring Scooby Doo.

Lesnar is one of the WWE’s largest stars, known for his strength and amateur style of wrestling (he just loves his suplexes). He has also had success in the world of mixed martial arts (MMA). He was previously the UFC Heavyweight Champion. Past cover athletes for the WWE 2K series include Stone Cold Steve Austin, John Cena, and The Rock.

“My career has been defined by dominating every opportunity presented to me,” Lesnar said in a press release sent to GamesBeat. “I am excited for my newest opportunity representing WWE 2K17 as the franchise’s ambassador and honored to serve as the WWE 2K17 cover superstar.”

In WWE, Lesnar has been a four-time World Heavyweight Champion. He also ended The Undertaker’s undefeated streak at WrestleMania, the company’s biggest show of the year, in 2014.

We don’t know much about new features of gameplay changes for WWE 2K17 yet. 2K has previously revealed Bill Goldberg as a preorder-only character.