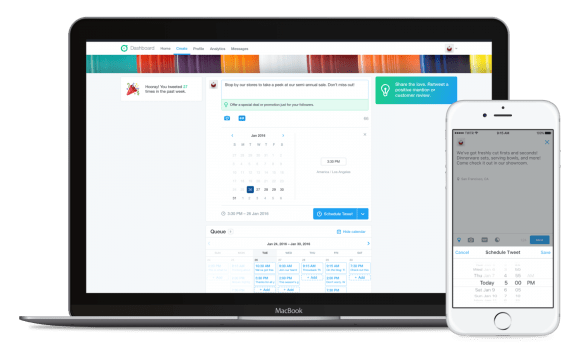 Twitter has launched an app aimed at helping businesses manage communication and engagement with their followers. Called Twitter Dashboard, it’s available in beta for those in the U.S. on both iOS and as a desktop app. One could think of it as either a Hootsuite competitor or simply a take on Facebook’s Mentions app, but specifically geared towards businesses, not individuals — they have Twitter Engage for that.

Above: Twitter Dashboard lets businesses create custom feeds to monitor what’s being tweeted about them.

In a blog post, Twitter explained that businesses have a difficult time creating “authentic” connections due to lack of time and resources. The solution it came up with is a tool that facilitates these communications for all businesses. “It gives business owners a clear picture about what’s being said about their businesses, lets them schedule tweets, and offers insights about their tweet performance,” wrote Noah Pepper, a Twitter product and engineering manager.

In the current state of affairs, social media managers or others likely pair the company’s Twitter account with their own using a service like TweetDeck, Hootsuite, or even Twitter’s main app. But the danger is an errant tweet being posted or retweeted on the wrong account — we’ve seen it happen many times, with “interns” being blamed. Twitter wants Dashboard to be the one-stop shop for all tweet-related management for businesses.

Among the features is the ability for companies to create their own feed, choosing to hear more of what people are saying about their business. The intention is to surface all the mentions that you can address while also monitor what’s being said about your industry and competitors.

After listening to the ecosystem, businesses may want to be proactive in communicating. Dashboard lets them schedule tweets, a standard feature of most social media management platforms these days.

Lastly, Twitter wants to inspire businesses to tweet more, so it’s providing tips on what they can share. This is likely part of the company’s efforts to drive up its user numbers. With sluggish growth, Twitter needs to find ways to reinvigorate itself. This includes not only boosting the confidence of advertisers, but also of brands interested in more organic efforts to reach consumers on the platform.

While available for both iOS and desktop, there’s no indication of when or if an Android version will be released. And although Twitter Dashboard is geared towards businesses, there’s also nothing stopping companies from using TweetDeck or Hootsuite, especially if they’re managing other social media accounts on LinkedIn and Facebook.