AMD has a plan for this generation of PC video cards, and it’s all about offering performance at a low price.

The Radeon RX 480 is an excellent video card that everyone building a PC on a budget — especially for the purposes of virtual reality — needs to consider. Out today at $200 for a 4GB version (I’m using the $240 8GB model), the 480 is roughly equivalent in terms of horsepower to the Nvidia GTX 970 or Radeon R9 390. The big difference is that AMD’s newest card is more efficient, less expensive, and performs much more like a 980 when it comes to virtual reality.

The newest Radeon is facing off against Nvida with two powerful cards: its GeForce GTX 1080 that drips with power at $600, and the 1070 at $380. AMD has nothing to match the muscle of the 1080, but it is ignoring that highest-end market for now and is instead making a play for everyone else.

That’s a strategy that I think is going to work.

I’ve put in a lot of gaming on the RX 480, and I can see myself pointing to this chip any time someone says they’re concerned about the costs of building or upgrading a PC.

$200 for 5.8 teraflops (floating-point-operations per second) is a bargain. TFLOPS isn’t the best measure for real-world performance, but it’s hard not to look at that ratio and get excited. That’s especially true when you compare it to $380 for 5783 TFLOPS for the GTX 1070 from Nvidia.

Now, real-world benchmarks tell the real story here. The 1070 is going to get better results in most games — although things get interesting with games that feature DirectX 12 support. AMD is squeezing a lot of extra horsepower from Hitman, Forza 6 Apex, and other releases that run Microsoft’s newest gaming interface tools. And that shows when you play those games on the 480.

I ran some benchmarks across a handful of games. The only other card I have on hand at the moment is the GTX 980 Ti, which is very close to the GTX 1070 in terms of performance. Everything was tested on Ultra settings with Vsync turned off on a Windows 10 64-bit PC with an Intel Core i5-4690K CPU. 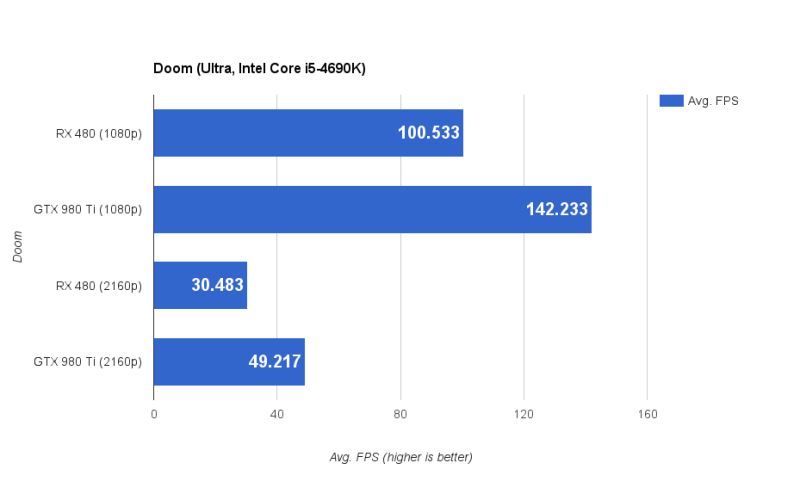 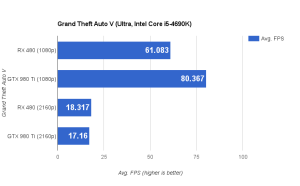 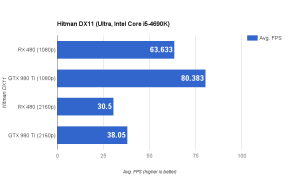 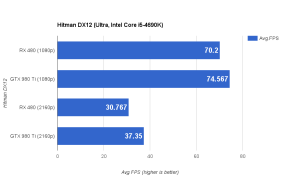 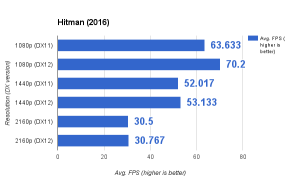 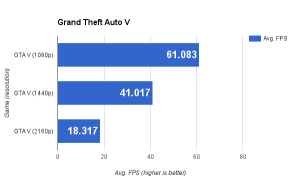 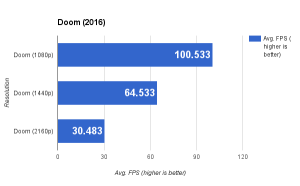 You can see that the 980 Ti still has an obvious advantage (of course it does), but the price gap between the two looks crazy when it comes to certain software. In particular, the results for DirectX 12 games like Hitman show only a difference of a few frames. That’s impressive for a $240 card going up against something much more expensive, and you can likely expect a lot more of that kind of performance going forward as more games adopt the DX12 standard.

Virtual reality is one of the big selling points for AMD and the 480, and this is likely the best new entry-level card for someone looking to build a machine for the Oculus Rift or HTC Vive. The 480 handled everything I threw at it with almost no issues.

It’s difficult to benchmark VR games since the Oculus and SteamVR software environments do so much work to ensure everything stays as close to 90 frames per second as possible, but my real-world experience of running games like Eve: Valkyrie, Edge of Nowhere, and Lucky’s Tale confirmed that this easily surpasses the minimum threshold for VR gaming.

And a few tests, like the SteamVR Performance Test, confirmed what I was seeing. That tool puts the RX 480 in its highest category of “Ready,” which is beyond “Not Ready” and “Capable.” The card rendered everything in this test at 90 FPS.

The major improvement that AMD made to its current generation of cards is shrinking the chip down to a 14 nanometer fabrication. That’s half the size of the 300-series cards, and it’s one of the main reasons the company is able to offer so much power at such a reasonable price, but this design also brings with it several other welcome attributes.

Most importantly, the small 14nm die radiates less heat and requires less power. This means that AMD doesn’t need to have a loud fan cooling it down all the time. The end result is a quiet VR-capable GPU that only needs 150 watts. These are all major quality-of-life gains that you might not necessarily go wild about when you see them as bullet points on the back of a box, but they will make your gaming PC more economical and less noisy over time.

Not an option for 4K

AMD has made its choice. It is betting on mass-market consumers and virtual reality for 2016 and early 2017, and that means it is not pursuing 4K gaming at this time.

The RX 480 is simply not equipped to take on the 3840-by-2160 resolution. That’s the new high-end standard in the PC space, and the 1080 serves that market well. But consumers are going to take their time adopting 4K monitors, and AMD wants to serve a much larger audience in the meantime.

That means this card is not going to serve this particular gaming need.

When AMD announced the 480, I couldn’t get over how smart the company was for making a blitz attack at Nvidia’s weakness when it comes to price. Now, after using it as my day-to-day graphics cards, I’m struck by how well the company executed on its promises.

If you’re looking for a card that can run most new releases at 1080p and 60 frames per second, it’s hard to argue for anything else. The performance-per-dollar mathematics just make too much sense for the 480.

But the biggest thing here is what this means for VR. Today, you can buy an Nvidia GTX 970 new for around $200. That’s the absolute minimum GPU for Rift and Vive. But now, for the same price, you can leapfrog the 970 with an AMD card that is much better at handling virtual reality games.

I highly recommend the RX 480.

AMD loaned GamesBeat an RX 480 for the purposes of this review. It is out now.