Console and PC games have become overly complicated with 16-button controllers and boring because they encourage sedentary activities. That’s the view of Brent Bushnell, the cofounder of Two Bit Circus and the opening speaker at the Gamelab game developer event in Barcelona, Spain.

At Two Bit Circus, Bushnell and cofounder Eric Gradman have created a way to engineer fun using a combination of interactivity, electronics, and physical real world experiences. Among the events they created was the Steam Carnival, which was held last year in San Francisco and Los Angeles as a collection of interactive experiences, such as a real live version of Asteroids where players zap rocks projected on the floor. It’s all part of a movement to make games more social, immersive, and experimental. 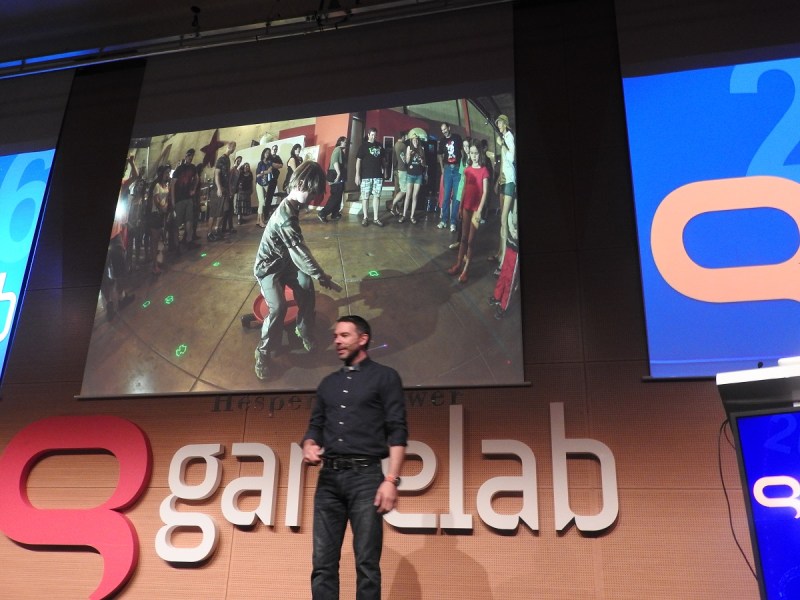 Above: A real-world Asteroids game at Steam Carnival.

“What’s more immersive than VR? How about real life?” said Bushnell, whose father Nolan Bushnell was the cofounder of Pong creator Atari in the 1970s. “You want to use your brain, but your full capabilities. We want to get you closer to a real game experience.”

Brent is focused on creating “narrative reality” experiences that combine immersive interaction of tools such as virtual reality with the real life.

“My cofounder and I were frustrated with out-of-home entertainment, which hasn’t changed since laser tag and mini golf,” he said. 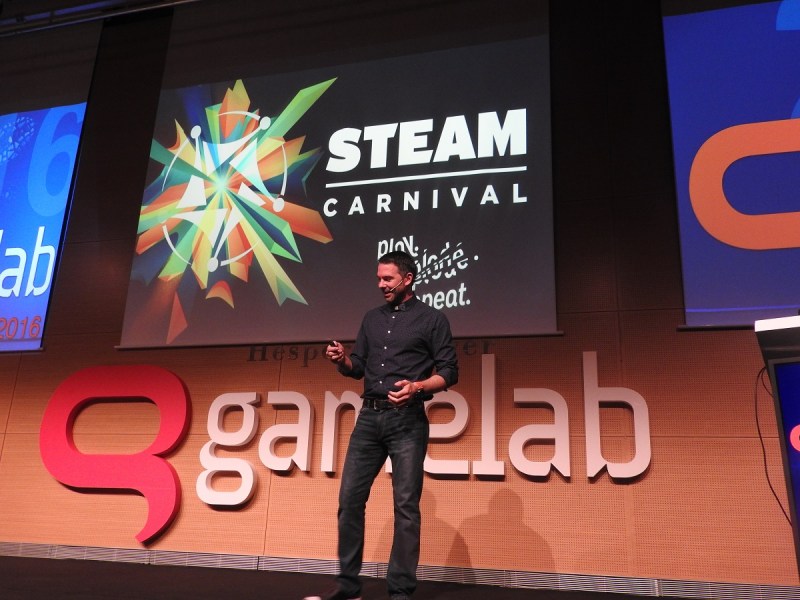 Above: Brent Bushnell is co-creator of the Steam Carnival.

The company has created its Steam Carnival, which will move to Dallas this year. One of the experiences was to toss a ball at a target to make a person get “dunked.” But instead of immersing the person in water, this tank was special. It had a bunch of flamethrowers, and the person was wearing a fire-proof suit. When someone hit the target with a ball, the flamethrowers would spurt flames at the person in the booth.

Brent has experimented with a lot of games, such as a tabletop arcade game where six people play snake at once. Two Bit Circus also created a wall of buttons, which is a mash-up of Whack-A-Mole and Twister. 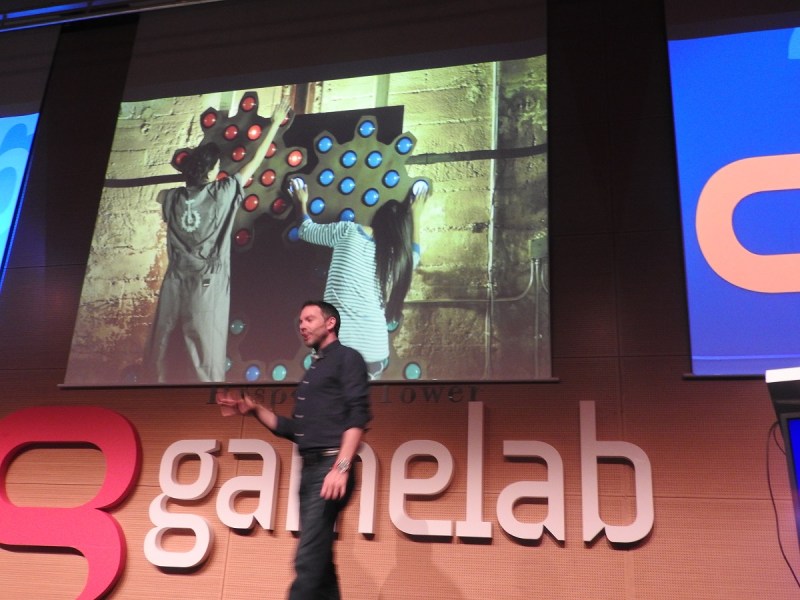 Above: The Steam Carnival had a game that combined Twister with Whack-A-Mole.

It is also creating virtual reality entertainment and its “story rooms” such as an interactive space adventure. In one version, one person is in VR and another is not. And that person has to describe what the other has to do, and the person in VR has to describe what they see. In other versions, a group of people are placed in a room and they have to use what is in the room to escape it.

One thing he has found is that “millennials value experiences over owning things,” Brent said. Brands are starting to catch on to this, and that’s why they’re working with Two Bit Circus. 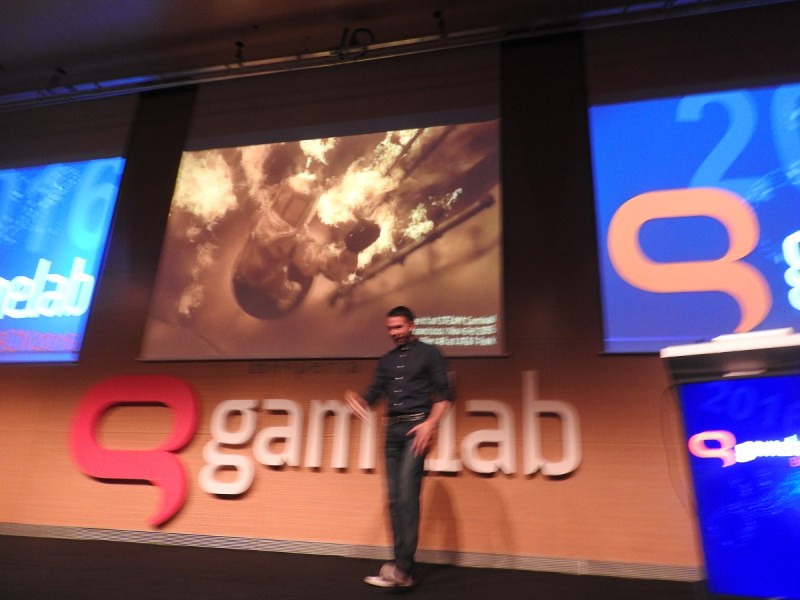 Above: Brent Bushnell’s Steam Carnival had a fiery dunking booth.

“People would rather have a life experience, and that’s good for us in the game industry, where we make experiences,” he said.

Nolan Bushnell is an advisor to Two Bit Circus, helping to vet the various ideas. Brent Bushnell said he has a number of different projects that will come together as one eventually.

To be more creative, Bushnell advises people to get “random inputs” as much as possible. That means going to things like random conventions on packaging or dentistry. And rather than specializing, he suggests that people should learn as much as possible about as many things as possible. And experiment.

Disclosure; The Gamelab organizers paid my way to Barcelona. Our coverage remains objective. 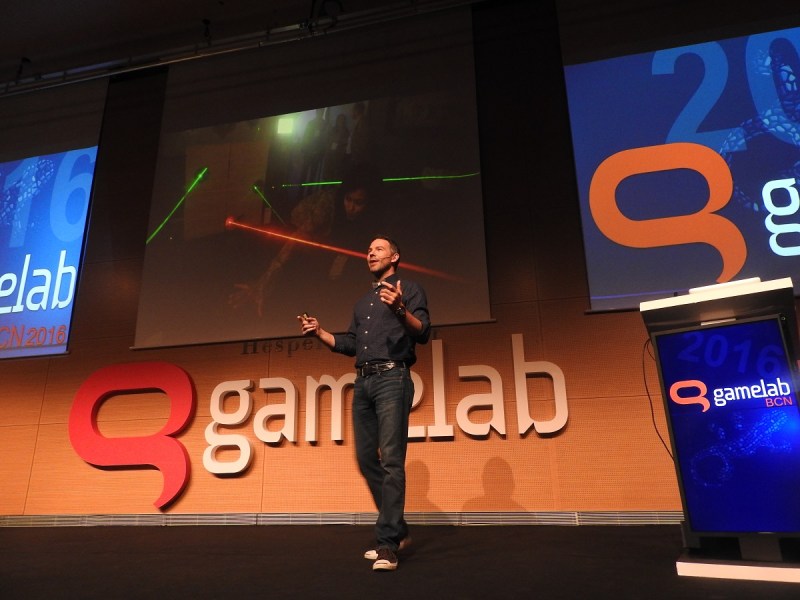