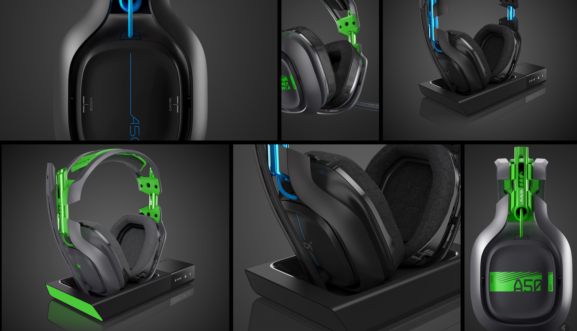 The new Astro A50 wireless headset.

A wireless audio headset on PC or console can do a lot to improve the quality of your gaming experience — until you go to start a marathon session and find out the battery is about to die.

Gaming-headset manufacturer Astro Gaming knows you hate when that happens, and it’s integrating smart technology into the next generation of its A50 wireless headset to ensure you never have to think about battery life again. Astro will launch the new A50 for $300 this summer, and works with PC as well as the PlayStation 4 and the Xbox One completely wirelessly. It will replace the original version that the company introduced at the same price in 2012. Since then, companies like Plantronics, Razer, and Logitech have all introduced their own high-end wireless headsets, and Astro knows it has to step up what it’s offering to stay ahead of the competition.

This follows a recent refresh for the wired Astro A40 headset, and the company realized that it had to do something similar for the A50 to solidify its place in the market.

“We learned a lot from the last edition of our A40, and we felt that a lot of that belonged in the A50,” Astro Gaming director of community marketing Thadeous Cooper told GamesBeat. “The A50 is our premium product. So a lot of the stuff we developed for the A40 needed to come over. You can’t have your premium product sitting behind another product in terms of features and technology.”

I went hands-on with the device at the Electronic Entertainment Expo trade show in Los Angeles earlier this month, and I found that Astro is definitely upping the capabilities of the A50.

Cooper said that his team has listened to feedback about the microphone, and the new one is better. Astro is beefing up the battery with the latest advances in that field. And the A50 has full integration compatibility with the Astro Command Center for personalization and tinkering.

Potentially the biggest additions to the A50, however, are its motion sensors and base station because they could solve every battery headache you’ve ever had with a wireless headset.

Other wireless gaming headsets like the Razer Man O’War will automatically shut down when they think you’re not listening to anything. The problem is that they will shut down even if you’re wearing them if all you’re trying to hear is a notification sound from a Windows app or you’re taking a break from Spotify for a few minutes. It’s annoying to wear a headset only to have it go dead on you.

The A50 fixes the auto-sleep feature with its motion sensors. Instead of trying to figure out if you are playing audio or not, Astro is looking to see if you are actually wearing the headset. If it detects motion — even subtle little twinges — it’ll stay on. If you take it off and set it on the desk to grab a drink or go to the bathroom, it’ll automatically shut off within seconds. When you’re ready to go again, it boots back up in about one second.

This means that instead of you having to think about the battery, Astro will do that for you without getting in your way or frustrating you.

The other half of this is the new base station. This little box plugs into your PC or console, and it is packed with features like auxiliary audio jacks and indicator lights for battery life and more. But the biggest thing is that the base serves as a docking stand for your headset. Whenever you’re done with it, it’s easy to place it right on the station, which is also a wireless charger. You don’t need to plug in a micro-USB cable or anything.

“You’ll almost never run out of batteries as long as you’re putting it back,” said Cooper. “You’ll always have it charging, and you’ll always know how much you have left.”

Cooper also thinks that it’s these kinds of improvements that will win over fans and new converts. He acknowledges that $300 is a lot of money, but he pointed out that the old A50 model was $300 and this new iteration is a vast improvement.

“We’ve done everything to upgrade the headset,” he said. “And we’re not passing that cost on to consumers.”