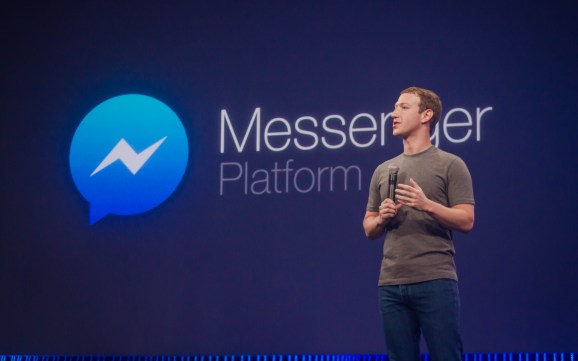 Facebook CEO Mark Zuckerberg on stage at the F8 2015 developer conference talking about the Messenger Platform.

Facebook today released new statistics on the growth of chatbots on its Messenger app and announced new features related to chatbots.

Since the chatbot platform launched in April, more than 11,000 bots have been added to Messenger, Facebook vice president of messaging products David Marcus wrote in a Facebook post. For some context, in May, Marcus said that “tens of thousands” of developers were working on Messenger bots.

And Facebook now lets users rate Messenger chatbots, from one to five stars, and write reviews. But, at least for now, members of the public won’t be able to see this feedback.

“Ratings and reviews are currently shared with only the bot developer through a dashboard in developers.facebook.com and via email,” Marcus wrote.

With 900 million users, Facebook Messenger is one of the most-used chat apps on the planet.

As far as new features go, one big change is that chatbots can now send videos, audio clips, GIFs, and other files, Marcus wrote.

Each bot can now have a permanent menu of five options to allow more user navigation.

Up to 10 buttons can now be used to respond to a message. (Buttons are often used to give people a structured experience instead of plain text.) Buttons now pop up at the bottom of the screen in line with previously chosen options, instead of showing all options.

For those who opt in, a secure protocol is now available that allows businesses to connect customer and Messenger accounts. Facebook Messenger emojis also got an update June 1.