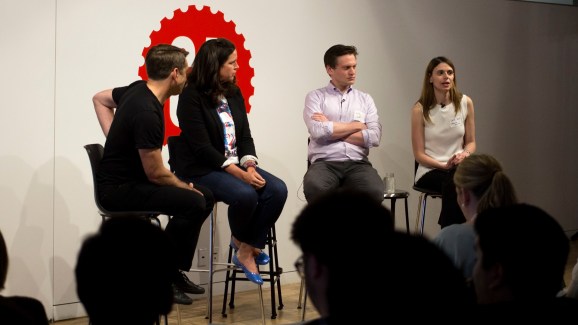 In a panel talk last month with senior members of Hillary Clinton’s 2016 campaign, domestic policy advisor Sara Solow and chief digital officer Teddy Goff offered a glimpse inside how the campaign grapples with Twitter — and the genesis of “Delete your account.”

Here’s an excerpt from the discussion [emphasis ours], held at the headquarters of tech education startup General Assembly in New York and moderated by its CEO, Jake Schwartz. The talk also included campaign CTO Steph Hannon; it was ostensibly designed to recruit new tech talent to the Clinton campaign.

I am struck by how the rise of social media has affected our policy development on a day-to-day level. In 2008, I was working in the econ part of the policy shop [on Obama’s campaign], and if you guys recall, the economy was falling through the floor … and the way that we responded to that cascade of horrible financial events was through these long serious speeches … And in 2012, and still now, the policy speech is very important — but almost just as important is the tweet.

Our tweet might go out first. It might be the thing that rides the news cycle. It might be the only thing that reporters see and report on. And so on a day-to-day level, when we’re thinking about how to create and transmit policy commitments in a way that people will actually hear and digest, I do think it’s changed quite significantly.

The long speeches are still important, but if CNN and MSNBC decide not to cover them, they will not be heard by the vast majority of viewers. And Tweets and the shorter statements that can then put in emails, and whatnot, go out, are disseminated, and we can almost control that dissemination.

But as a policy person, how do you fit that into 140 characters?

It’s really, really difficult. And sometimes I’ve fought back with the guy who’s in charge of helping craft all the tweets and proofing them, because I will say ‘we cannot put this in a tweet. It’s too complicated…’

Sometimes though, it’s exactly the point. It has more force to make ourselves boil it down to a couple of characters, than have the very long exposition on the matter.

… And I think we’ve learned as we’ve gone about when is the right time to do something in a big speech form — or fact sheet, that was the other major vehicle that we used to disseminate policy in 2008. We still do a fact sheet: ‘What is Hillary’s position on trademark law and copyright law’ — well, let’s look at her ‘fact sheet.’ And everybody would have their fact sheets walking around. And when I started, [Teddy Goff] was like, ‘fact sheets are important, but you’re not walking around events with fact sheets any more.’

… We have to translate that into tweets and emails and blogs and all the other places that people are living everyday, digesting content. And sometimes starting with that more condensed form actually helps us figure out what we want to say quicker, and that can be a clarifying exercise.

So would you say that the tweet is the sound bite of the 21st century?

Yes, absolutely. In many respects, yes. And they force you to think about what your sound bite really is, and what it should be.

You have to ask them what their favorite tweet is.

Nothing is springing to mind right now. We did just have a very good tweet.

Are you referring to the tweet or are you telling us to…?

How does “Delete your account.” — which was awesome — how did that actually get out the door? Was there a committee discussion around it? Was it a 23-year-old who just thought it’d be funny?

So I — I, uh, promised myself and my team that we would not do a whole lot of public discussion of how that came to be. I will say, no, it was neither — it was not a 23-year-old. It was a team effort, but not that large a team.

I think one of the great things about our campaign is, especially having the weird experience of moving from Obama-land [Geoff also worked on Obama 2008 and 2012] to Clinton-land, Clinton-land is reported on in strange ways and you read things about your own work that is totally untrue. … People probably have this idea of our campaign as this big, lumbering, bureaucratic place, when in fact it’s not that way at all. Probably two or three people, including me, laid eyes on that before it went out the door.

You can watch the full panel below and on Facebook.