Playing We Happy Few in a bar packed with people isn’t the best way to experience it for the first time. But despite all that noise, the stark white faces of the men and women who populate the game (and their creepy smiles) left a lasting impression.

That’s good news for Compulsion Games, an independent developer that was a part of Microsoft’s press briefing during the Electronic Entertainment Expo. E3 is one of the biggest trade shows in the industry, and Compulsion exposed We Happy Few (coming to Xbox One, PC, Mac, and Linux in 2017) to a huge audience with an intriguing new demo.

According to tracking company ListenFirst, We Happy Few beat out huge blockbuster games in terms of Internet searches during the show. It also won “Best new IP” in GamesBeat’s and Epic Games’s Unreal E3 Awards.

A few weeks before E3, I played We Happy Few with the help of design director David Sears. It’s a first-person survival game where you have to escape Wellington Wells, a fictional city in an alternate-history version of 1960s England. In this world, the Allies lost World War II, and that had a profound impact on England’s citizens. After the war, the people had to do what the developer calls “A Very Bad Thing” during Germany’s occupation of the country. The event was so horrifying that they became reliant on Joy, a powerful pharmaceutical, to forget what happened that day.

The problem is the pill not only makes them forget about the Very Bad Thing but also what they did yesterday or an hour ago. Those who can’t take the drug (because they have a high tolerance) or just refuse to do it are known as Downers. They’re the lowest rung on the societal ladder. You’ll play as three different Downers, starting with Arthur Hastings.

In the E3 trailer, you can see Hastings’s world unravel as he starts to remember what happened to him and his brother.

Adapting to a changing city

Though We Happy Few has strong narrative hooks, it strays from the linearity of other story-heavy adventures. It’s a survival game first and foremost. You have to scrounge for food and water so your character doesn’t die from starvation, and you have to sleep to keep your stamina up. If you’re going to escape from Wellington Wells alive, you’re also going to need weapons.

This version of England doesn’t have any guns or bullets (moreso than in the modern U.K.) Sears told me you’ll eventually find out why during one of the quests. So you turn to melee weapons (like pipes or wooden clubs) and collect different types of resources, which are ingredients you can use to craft bombs, healing balms, and other vital supplies. Sometimes, this means breaking into houses and stealing whatever you can find. But if people see you doing this, they’ll know you’re not on Joy and try to attack you.

The townspeople are a suspicious bunch, so anything that deviates from the norm will immediately catch their attention. And once they call you out, the ruthless cops (the Bobbies) won’t be too far behind.

This is where Joy pills come in handy. For Downers like Arthur Hastings, Joy is a form of camouflage. Taking it will temporarily make the world seem a lot brighter and cheery than it actually is. But more importantl, it makes you fit in with everybody else — Hastings will even swing his arms in the air when he walks to show how happy he is. Wearing different outfits can also help you blend in. 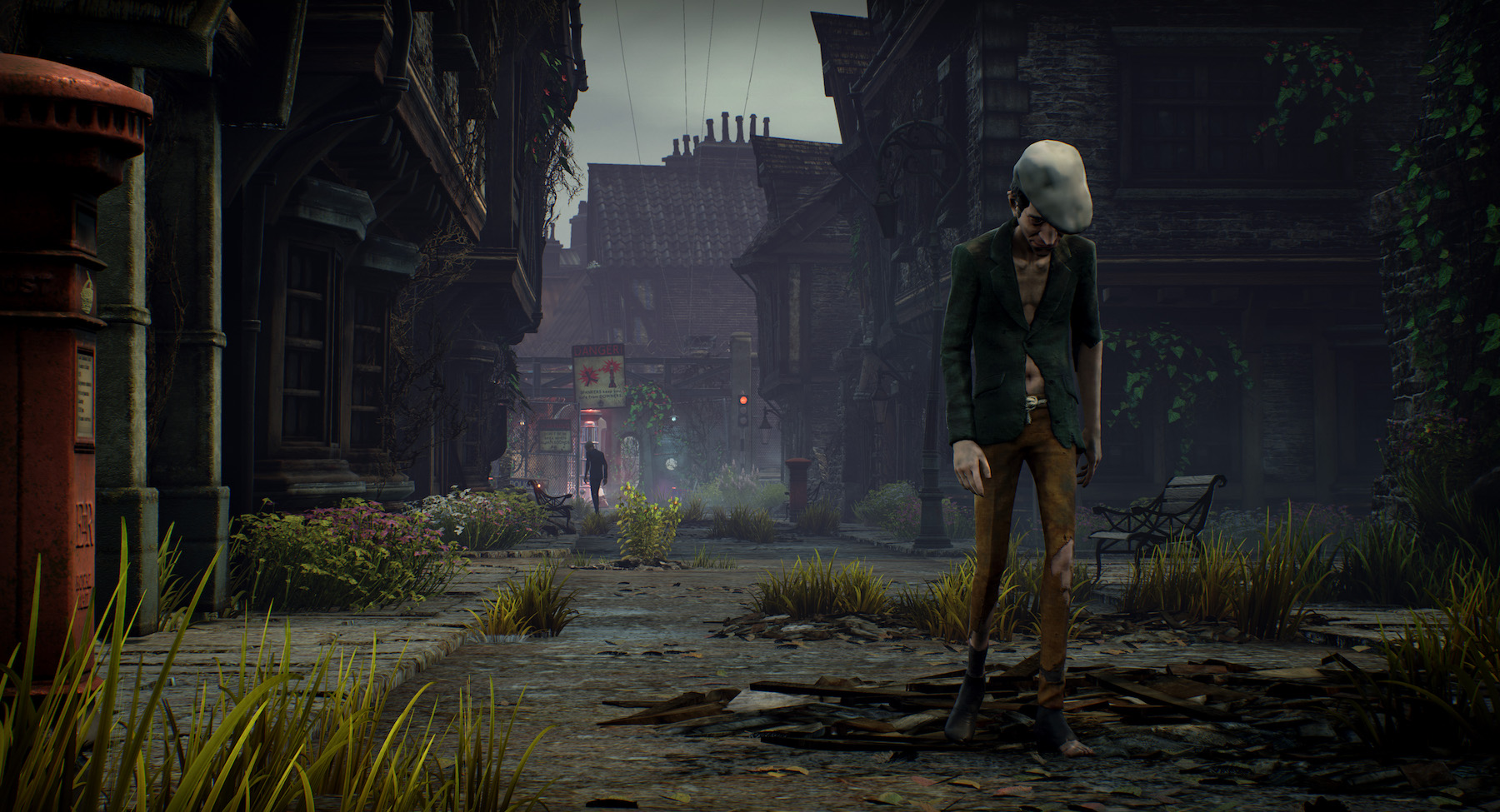 Above: Arthur Hastings’s journey begins in a run-down part of Wellington.

The pre-alpha version of We Happy Few that I played was pretty hard. Whenever I died, I came back to a safe space with some of my inventory intact. But that was just for demoing purposes. In the real game, death is more punishing: When you die, you have to start over from the beginning. You can’t load a save file or go back to a checkpoint.

The town will also look much different when you return. We Happy Few uses a procedural generation system that changes the placement of houses, streets, item locations, and enemy encounters for each new playthrough. The developers built a large pool of content for the computer to choose from when it creates a new city. Sears said that you’ll only see “a third of what’s possible” in your first time through.

“It will always be very different because the specific encounters will vary as well,” Sears added. “Sometimes, you might have a playthrough where you learn all about hallucinogenics and create weapons and tools [around that]. … And in another playthrough [and] you never even get that recipe.”

The stories for the Downers, however, will stay the same. You won’t discover the truth behind Joy and the Very Bad Thing until you complete We Happy Few with all three characters. 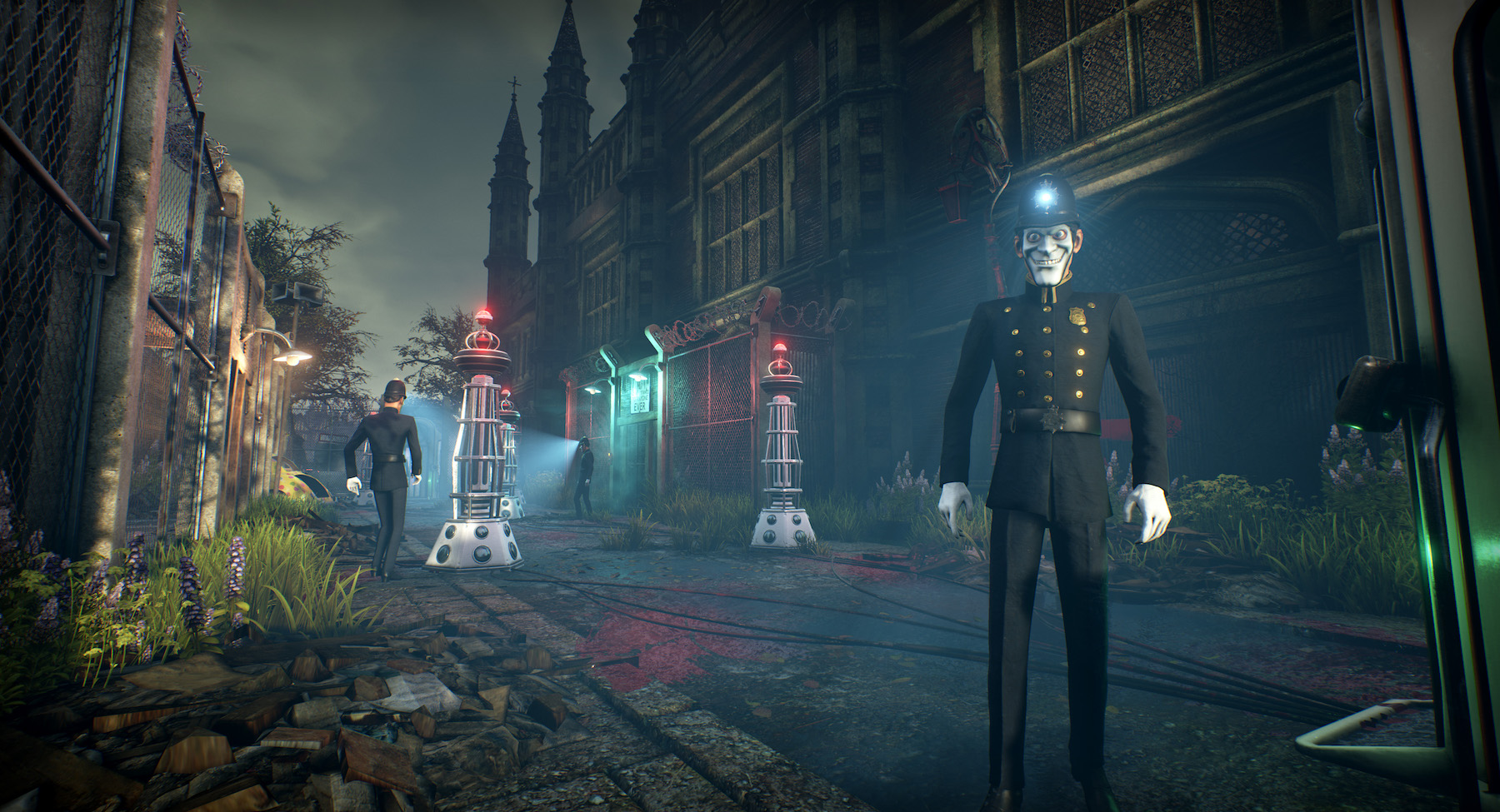 In my demo, Hastings was a little too reckless. At one point, I had about half-a-dozen people and Bobbies chasing me through the streets because of my brazen robberies. Knocking down angry old ladies with my fists probably didn’t help. While it’s easy to demonize the people who wanted to tear my head off, Sears pointed out that I shouldn’t just assume they’re being evil for evil’s sake.

One way Compulsion Games is telling We Happy Few’s story is through these unplayable characters. They have their own names and histories. As you meet them, you’ll learn more about how overdosing on Joy affected their lives.

“It’s really cool to actually design these encounters that not only tell you about the world, but show that these people still have needs and desires. They’re not just homicidal maniacs,” said Sears. “That’s how you really find out about the world. … When you understand the Very Bad Thing and what they had to do to survive, you sort of understand why they’re taking a drug that makes them forget what happened 15 minutes ago.”

Technically, you don’t have to kill anybody in the game. We Happy Few keeps track of the bodies you leave behind, and Sears teased that number “might affect the final outcome.” But it’ll be much harder to escape Wellington Wells if you don’t dabble in a little murder every now and then.

“It’s pretty challenging,” said Sears. “The world doesn’t want you to go. … It wants you to stay. Forever.”