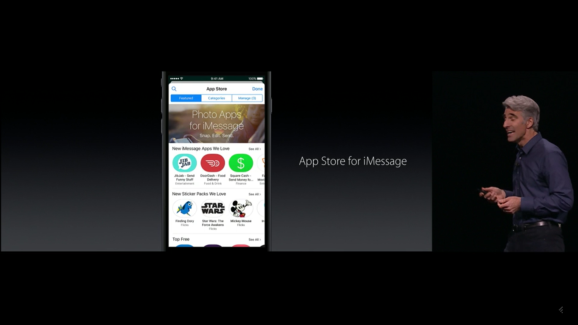 The App Store for iMessage Apps for Messages in iOS 10.

At betaworks, we are very excited about the opportunities conversational interfaces offer for building new kinds of products, services, distribution channels and user experiences. We have been investing and building in this space for quite some time now. Given our curiosity and experience in this space, we introduced Botcamp back in April this year and we were blown away by the quality and quantity of applications in this space. We received over 400 applications from early stage bot companies from all over the world. These developers are building conversational services in various verticals from enterprise, finance, and commerce to travel, analytics and news on different platforms. Some products were thin bots, some had taken a human-assisted approach and some were a result of over a year’s work on language analysis and machine learning in specific verticals.

Let us now talk about the one platform that is absent from the graph below because it wasn’t launched until after our application deadline.

Apple recently opened up its Messages, Siri and Maps products and launched the beta version of its iOS 10 SDK. Apple also introduced rich notifications and comprehensive widgets in iOS 10. It might seem that Apple hasn’t joined the bot world that has been dominated by the likes of Slack and Facebook. But, when we look at this landscape closely, it is fascinating how Apple has indeed joined the race but in a manner most of us did not expect.

Bots can be thought of as simple, contextual ways of accessing services without changing the context of where you already were and what you were doing. Bots reduce and often eliminate the need for downloading and using traditional mobile apps.

We can broadly put these bots in three categories —

Apple, with its updates in iOS 10, took an interesting approach of having visual bots and strengthening its audio bot in its ecosystem.

In the context of the way I defined bots and the categorization of bots, we could argue that the new notifications, widgets and iMessage apps in iOS 10 are Apple’s visual bots. We now also have card-like interactions in Maps and Siri that could also be treated like visual bots.

Let’s unbundle each of these “Apple bots” —

Up until now, the notifications on our iPhones offered limited context, information, and actions.

For instance, Messages app currently has quick replies. When I get a new text message while I am catching up on emails or watching a video on Youtube on my iPhone, I have two options: 1. I could read the latest message, pull down the push notification and respond 2. I could click on that notification to pull up the chat thread in my Messages app. The former offers limited context and the latter involves complete change of context.

In iOS 10, we can 3D Touch a notification to open up a popover window with greater context. After acting on those notifications, we can seamlessly go back to what we were doing without changing context or app. We can also 3D Touch on our lockscreen.

A lot of textual chatbots these days are extensions of installed apps on our phones. Such chatbots are just an easy way of accessing a mobile app via frameworks and API calls.

Similarly, rich notifications in iOS 10 can be treated like app extensions. They live in the notifications layer, increase engagement and help users in unique ways without expecting them to pull up an app. Imagine being able to dip into a group conversation on a messaging app, get the context of prior messages and respond without leaving Instagram.

We often hear that the messaging inbox is the new homescreen and that different chat threads are the new “apps” for infrequent use cases.

For the purpose of making things simpler to understand, I categorize iMessage apps into 3 types.

The WWDC presentation of two friends placing an order on DoorDash over iMessage introduces a notion of shared context. Participants in a chat thread can get something done collaboratively via exchange of content and state. Such real-time exchange could enable games, collaborative tools, and other services that require active engagement of parties in a chat thread.

Apple has taken widgets from the notification center and deeply integrated them within the operating system. They are accessible on the lockscreen, to the left of the homescreen, and also via 3D touch on an app’s icon. These widgets would convert our lockscreen from a place for passive consumption of notifications to homescreen-like center for actually carrying out tasks. We shall see whether the messaging inbox or the lockscreen ends up becoming the new homescreen.

The widget layer could be thought of as an additional runtime for new interactions on top of the notifications and iMessages layer. They reduce the need for opening up apps by providing more context, interactions, and accessibility to content.

With SiriKit, developers can enable users to access content and services using voice. It offers third-party integrations with a limited set of verticals —

These services are extensions of mobile apps that you already have installed on your phone. Apple doesn’t support “Siri-first” or “Siri-only” services yet.

Siri was opened up in a way that involves the practice of installing an app on our device. As a consumer, to add functionality to Siri, we must install an iOS app. Developers need to create special additions to their iOS applications that enable Siri to interact with their apps. Siri extensions cannot be built or added outside the context of an iOS app. At least for now.

Changes to Siri raise a bunch of interesting questions —

Every change we have discussed so far is limited to either a communication channel or the digital context of how we interact with app and services. Apple, with iOS 10, has opened up its Maps product for the first time. This enables developers to create new experiences that involve users’ geo-context.

Developers can now build extensions for certain type of apps like restaurant bookings and ride-sharing for Apple Maps. The Maps extensions will work similarly to intents for Siri and will allow developers to build apps with map functionality.

While Apple allows developers to create a limited set of interactions in its Maps app, it isn’t hard to imagine what could potentially be done in the future with greater flexibility and access. Imagine getting recommendations for contextual reads within the Maps app based off of where exactly you are standing in a foreign country on your vacation.

While it is too soon to comment on which methodology will be more user-friendly and effective, we are excited about both approaches. Each approach has its own set of challenges and opportunities. Both approaches help people do a variety of things without frequently changing context or downloading new apps.

It is fascinating how two tech titans (ie. Google and Apple) that have been competing on mobile apps and operating systems have taken a similar path (ie. visual bots) in their respective styles. Apple has taken a distributed approach of having visual bots integrated within its entire operating system while Google has redefined the very concept of mobile apps by changing their status from “downloadable” to “streamable”. As always, Apple is focusing on simplicity and user experience while Google is focusing on accessibility and developer flexibility. It is equally interesting how messaging platform rivals have also taken a similar, conversational approach to the bot paradigm. Both sets of companies seem to be playing to their strengths.

Thinking of bots as textual mediums narrows down the scope of what bots mean, what they will be capable of and how they will be used. Thinking of a bot as a new kind of user experience and delivery model will enable us to be as creative as possible in engineering bot services that people would love to use rather than coming up with solutions that developers and platform companies wish people wanted to use for their own interests. Attributing the rise of bots to declining app downloads and worsening app discovery issues seems to be the wrong way of looking at this trend. When bots truly go mainstream, we will most likely face the issues of discovery, competition, monetization, quality control, privacy, security and platform controls if we do not approach this new paradigm in a fresh manner. It will largely be the responsibility of the underlying platforms companies to strike a balance between their own interests, user experience and developer growth.

In the the weeks leading up to Botcamp’s application deadline, there was an expectation amongst the developers community that Apple will probably open up its Messages platform. But, it wasn’t as easy to predict what approach they would eventually take. It is not surprising that Botcamp applicants built products for every platform other than that of Apple. However, we are now very curious about what sort of experiences could be built using the iOS 10 SDK. Now that developers are able to build on this new platform, it opens up a whole new world of opportunities. As builders and investors, we are always interested in learning about new products. If you are working on anything you think we might find interesting, reach out to me at sarthak@betaworks.com

Thanks John Borthwick, Matt Hartman, Ana Rosenstein, and Steve Gillmor for reviewing versions of this piece.