GamesBeat: I was never part of the card game community until Hearthstone. I hadn’t played card games since the ‘90s. One thing I’m finding is how excited people are about card backs. Has that surprised you?

Chayes: I wouldn’t say we’re super-surprised about card backs, because on the team we’re all excited about card backs as well. This is an area where I wish we had more of this in Hearthstone, to be honest. It’s one of the areas where you can have a lot of customization. Right now the main ways to get customization in Hearthstone is through which decks I build, which is a huge amount of customization right there, but in terms of what I’m showing outwardly to my opponent, the card back is my main way to express that. Because of that, this is sort of my signature. I like playing with the Fireside Friends card back or the Ice Crown card back or whichever one I feel like represents my personality. We thought a lot of people would get excited about collecting these things, particularly the way that we’re awarding these now each month, by reaching rank 20. It’s a cool thing you get out of participating and continuing to play in the ranked ladder. On the team we were really jazzed about it before as well. So yeah, I think we knew this would be a fun part of the game. We’ve been happy to see that a lot of folks have liked it as well. 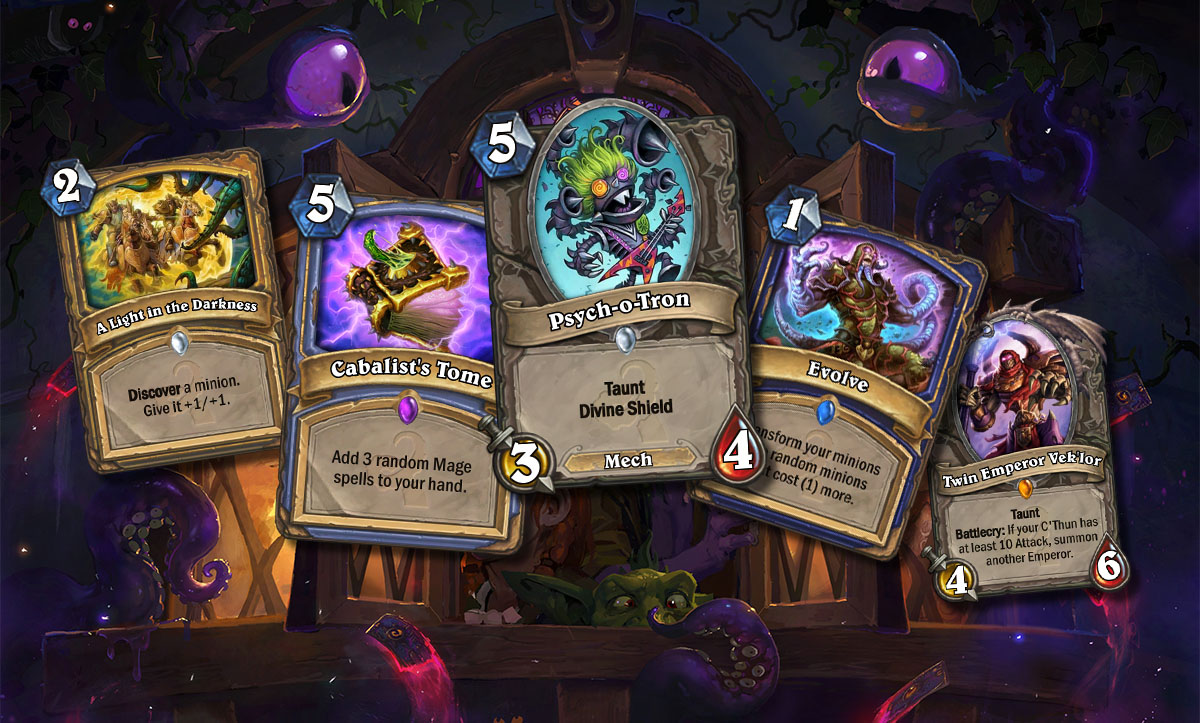 GamesBeat: Back before Hearthstone and Heroes of the Storm debuted, even before their alpha tests, who were you looking at when it came to free-to-play? When was it that Blizzard or Activision decided that free-to-play was something you needed to get into?

Chayes: For us we don’t ever really start with a business model. Our approach always begins with the game itself. We knew we wanted to have this game where—we wanted it to be super accessible. We wanted anybody to be able to come in and start playing very quickly. We also knew that it would be important to have a diverse group of people come in and play, because the whole idea was exposing the genre to a broader group of players. With that in mind, as we think about business models that make sense—that’s how we arrived at free-to-play. You could hypothetically imagine a world where there’s a subscription-based CCG, but it didn’t make sense for us with what we wanted to do for Hearthstone. Same with a retail box. That makes sense for some of our other games, but for Hearthstone, where we wanted a lot of people picking it up and jumping in, the free-to-play model just made a lot of sense.

GamesBeat: What portion of the Hearthstone player base has spent $200 or more on cards?

Chayes: I can’t go into detail on that. What we have seen is that there’s a lot of ways people engage with the game. A lot of players have spent money, certainly, and a lot of players spend nothing, yet they’ve still been able to make it to the top levels of the game, to legend ranking, without ever putting money in. That’s what we want to get out of the game. You’re not required to spend money. You can be very successful. You can make a very competitive deck. You can see everything the game has to offer without putting money in. And if you do choose to put money in, that’s totally cool too. We want to make sure that’s a great experience as well.

GamesBeat: Another thing I’ve been impressed with in Hearthstone is that you don’t use a lot of the monetization tactics we often see in other free-to-play games. It all feels like, when I spend money, it’s because I want to spend money, not because there’s a roadblock preventing me from advancing in the game. Is that an important part of your design?

Chayes: For us it was very important. We wanted to make sure that people could keep playing indefinitely, that they didn’t hit a wall where it’s time to turn it off and go do something else. You can continue playing and earning your gold just by playing missions. There’s a cap to how much you can earn on a daily basis, but as far as your ability to experience the game, try different things, keep playing, it was important to us that you could keep playing any way you wanted to. That was one of our governing philosophies when we designed the systems to begin with. Above: A quest offers 60 gold for winning five games as a mage or shaman.

GamesBeat: Have your shareholders ever pushed for more aggressive monetization tactics, or are they satisfied with what you have?

Chayes: We’ve been lucky. We have a lot of support through Blizzard and Activision as far as figuring out what’s the right model for the game. Let’s make sure we take care of the game first. That’s served the game very well.

GamesBeat: If you were talking to a smaller company that’s going to come out with a free-to-play game, what would you say are the best tactics as far as being both successful and fair to your players?

Chayes: The biggest thing I’d say is, make sure you respect their time. As an industry and as a genre, we do a pretty good job respecting the investment when people put in real money. I don’t think we always do as good of a job respecting the time people put in. We spent a lot of time on Hearthstone thinking about how we value somebody’s time when they’re putting in hours, days of time playing the game sometimes. And making it feel like you’re making a lot of progress towards your collection, making it feel like you’re having a good time and you’re enjoying yourself. If I was starting up a new company I’d be thinking about how we make sure the time people put into our game is something we appreciate.