At 16, Jordan Casey is a little young to be giving back. But he’s doing it anyway. This Irish game developer is on his third company, and his next game aims to teach kids to code.

At 13, the then-and-still baby-faced Casey started Casey Games, working on mobile game titles for the app stores while trying to keep up with his studies. He also later started Eventzy, aimed at helping users manage events, and Teachware, a tool for helping teachers in classrooms.

His first game was the Adobe Flash-based Alien Ball. In February 2012, he made an iPhone version of the game, dubbed Alien Ball vs. Humans. It was his first commercially released offering, and it also got him a lot of attention because it went to the top of the Apple iTunes Store in Ireland.

He followed that up with a seasonal version, Alien Ball vs. Humans 2. He also created Greenboy Touch, a puzzle-adventure game about a boy lost in a forest. Now, under a new company called KidsCode, he is making a game aimed at helping kids to learn programming. The initiative is called the Teenage Entrepreneur Movement.

I interviewed Casey at the Gamelab 2016 event in Barcelona, where he spoke in a fireside chat with Gamelab conference organizer Ivan Fernandez Lobo and British game pioneer Ian Livingstone. Here’s an edited transcript of our separate interview with Casey. 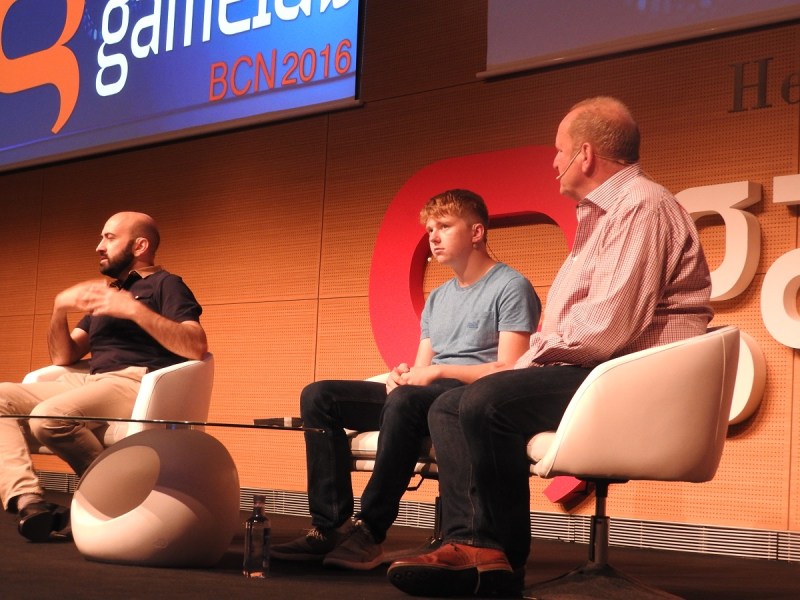 GamesBeat: Remind me how you got into this. You were nine, right?

Jordan Casey: Yeah, I started around nine. I always had an interest in games. I wanted to see how they were actually made, to take computers apart and take games apart. I started reading websites, reading books, watching videos on YouTube, until I had a basic understanding. I opened up my own website and as I progressed more and more, I realized I wanted to make my own games. There were no restrictions stopping me from actually going into business.

In 2012 I launched my first game, called Alien Ball. I didn’t expect it to be a commercial product. I saw it as an experiment. All of a sudden it became really big, especially in Ireland, and it kickstarted my business.

GamesBeat: You’ve started three companies now. How did that progress?

Casey: I started my first business in 2012, Casey Games, my action company. I launch games there every couple of months, just games my friends and I like to play and that I think other people would like to play. After that I did an app called Teachware, which was a bit different from games. It was a management system for teachers. At one point I was managing 60,000 daily active users on that, teachers running their classrooms. I wanted a new challenge, so I released that as open source.

That’s KidsCode. It’s a multiplayer virtual world. You learn how to program with it. You can talk with your friends. It introduces collaboration and creative skills. That’s my main project at the moment. I’m looking at seven- to 12-year-olds. It’s a very colorful game. It starts off very visual, and as you progress more and more it becomes more script-based. As I’ve been working on the project, I’ve not just become more passionate about programming, but also more passionate about creativity. I want to introduce making music or making videos or making art within that. It’s a challenge, but I look forward to it. 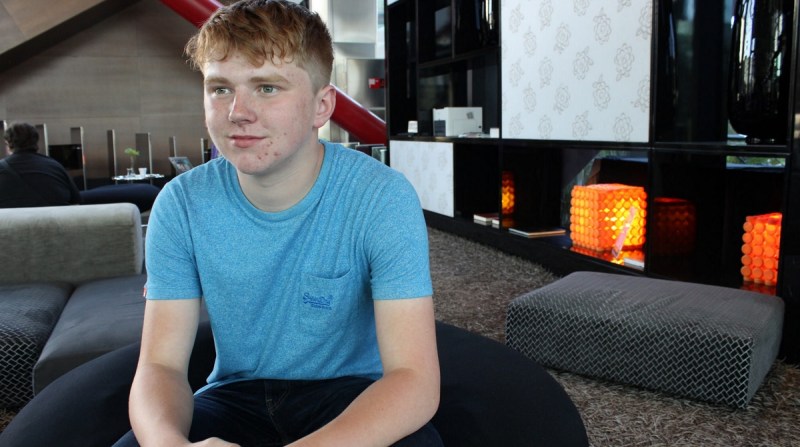 Above: Jordan Casey’s next game will teach kids to code.

GamesBeat: It’s interesting that you haven’t been doing this for very long, but you’re already inspired to help people not much younger than you to get into it.

Casey: Seeing the opportunities I’ve had through this and how this could be beneficial to my career, just because I started at a young age—I want to show other kids that. If you have a goal or if you want to do something in life, we’ve been born into this generation that has the internet and all this knowledge at our disposal. There’s nothing stopping you from doing it. I want to give kids tools. I don’t want them to be intimidated by it, or to have to go to a classroom environment. I want them to be able to learn by themselves, because that’s how I learned. Doing it through gaming makes it even better.

Casey: It’s just been my passion. I wanted to help other kids. The experiences I’ve had, getting to come to events like this, getting to share my story—other kids should have that opportunity as well. I just want to help them find it. 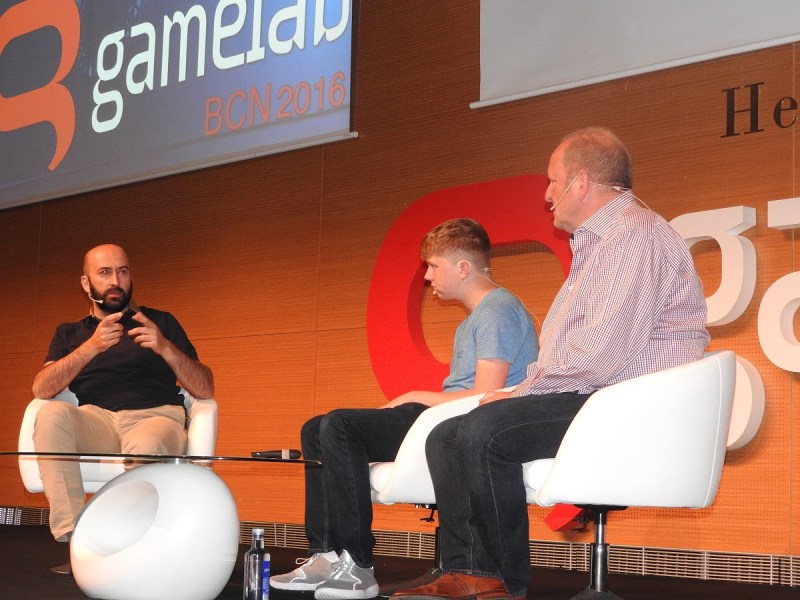 Above: Jordan Casey (middle) is 16 years old and is on his third company.

GamesBeat: For the different companies, do you have other people working with you? How do you spread the work around?

Casey: With the three companies, first and foremost, I’m not actually able to be a director legally. My parents do that on my behalf. That’s pretty much the only legal problem I have. I have about five or six people working with me on all these different ventures. I’ve done a lot of outsourcing in the last year, just for backend work, stuff I can’t do. I have a couple of people involved.

I try to get as many other young people as I can. I want people who have the same vision, who are from the same generation, and have the same goals. Luckily I have a lot of friends in my area, people who’ve been able to learn from my experiences, and people I’ve met online. It’s been a really fun project.

GamesBeat: Is it easier or harder to talk people your age into getting excited about this?

Casey: It depends. Luckily, with some of the opportunities I’ve had—a lot of my friends think it’s really cool that I get to travel and speak. But they don’t really understand exactly what I do. So I try to combine the both of them – this is what I talk about, and in return I get to go to all these places.

One thing I talk about a lot, I love soccer. It’s my favorite sport. So one thing I try to do is combine my business interests with my soccer interests. Whenever I travel I always go to a stadium. One time, when I was in Madrid, I was brought over by Real Madrid football club. I was able to meet all the players, like Ronaldo. That really struck a chord with my friends.

Whenever we talk about what we want to do with our futures, they say, “Jordan, you know what you want to do with yourself. I have no clue what I want to do.” So it’s just showing them the opportunities I’ve had. I want to help my friends. They ask for advice. When I have contacts that might be able to help them, I can connect them. Once they understand what I’m doing, if I talk about stuff that they’re interested in, it strikes a chord.

GamesBeat: Is your area known for being a tech hub particularly?

Casey: Not really. I’m from Waterford, which is in the south of Ireland. Its main industry was making crystal. Waterford crystal was one of the biggest companies there. A couple of years ago they moved all their manufacturing to eastern Europe, and the area’s been hit by a recession over the last couple of years. We don’t really have a huge development hub. Most of the work in Ireland is in Dublin. Ireland in general is becoming a big tech hub, but it’s all focused in Dublin. There’s not a lot of development communities coming up in other areas, which is unfortunate.

Dublin is becoming really good for tech, though. Wooga has their EMA HQ there. A lot of companies do that, because our corporate tax is really low. The tech business is becoming sustainable there, which is really cool. A lot of startups are coming up. But my area in particular doesn’t have much of a development community. My friends don’t have anyone to look up to or be like. For me it’s okay, because I can go to Dublin a lot and see all these big companies there, but my friends don’t get to see that. I try, again, to introduce those opportunities, bring my friends to these big offices and show them how cool it can be to work for these big companies. 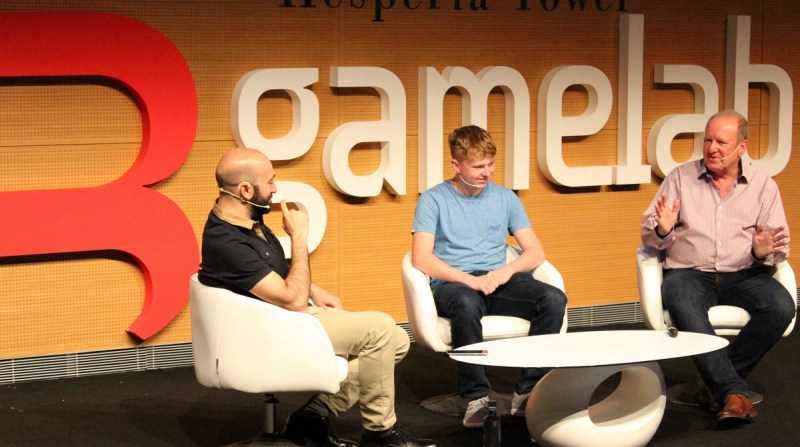 GamesBeat: So it’s partly in your own self-interest to get people excited about what you do. You’ll have more help for your own companies.

Casey: Exactly. At the same time, I don’t really like to put myself out there about what I do. I think it’s important for me to just be treated like a normal kid. In school I’m treated normally. I don’t have any special access or stuff like that. My friends don’t see me as an entrepreneur figure, necessarily. Which is good for me. I just to try to show them stuff they like.

GamesBeat: You’re not necessarily trying to race ahead and be older than you are.

Casey: Yeah, it’s important to just be a kid as well. I want to take advantage of things like going to these conferences, but I have to remember that I won’t get to have my childhood over again. It’s important to have that. If I do it right I can have both, which is really cool.