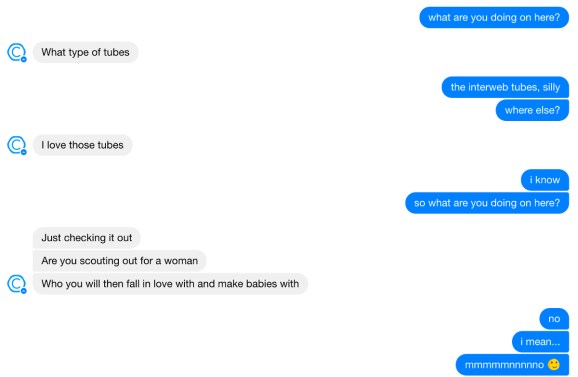 Chatible, a bot that randomly connects anonymous Facebook Messenger users, has surpassed 250,000 users since its debut three weeks ago, according to creator Zain Amro.

“I created Chatible because I felt there was an opportunity to connect people on the Messenger platform, and I was curious to see if it was even feasible,” he said. “I didn’t see many Facebook bots that connect people together, and I wanted to fill that void.”

More than than 1.1 million interactions have been clocked since the bot became available June 14. Chatible’s growth was accelerated shortly after launch by publicity from the website Product Hunt, where Chatible has been one of the most popular bots shared in recent weeks.

“It’s a simple fact that people crave human interaction. At the moment, bot chat AI fails to provide that natural user experience (not yet, at least),” Amro said.

Upon launch, Chatible disabled video and photo sharing to avoid the fate of earlier anonymous social interaction services. For instance, Chatroulette, a video chat service with a similar concept, quickly earned a reputation for being a place where things got sexually explicit really fast. It took this reporter two chat sessions before being propositioned for chat sex.

“We intentionally don’t support pictures/videos right now so this isn’t an issue. However, we might roll out a penalty system where users can flag people who’ve engaged in what they believe is inappropriate activity,” he said. “With photos/videos, it’s much easier to distribute inappropriate material, and since we haven’t yet implemented a penalty system where users can flag accounts (coming soon), we don’t feel Chatible is ready yet to support this.”

There are no group chat rooms, but users can have one-on-one chats about topics like politics, tech, sports, fashion, English, and anime.

“Chatible’s accessibility and its ability to leverage the already existing 900 million Messenger users allows people to have anonymous yet meaningful conversations with people around the world that have similar interests as them,” Amro said.