The ManyChat platform has been helping people with no coding knowledge make bots on Telegram since last summer, well before Kik, Slack, Microsoft, and Facebook joined the bot race.

In less than a year, more than 170,000 bots have been created using the ManyChat platform, most coming from places like Brazil, Russia, and other countries where Telegram is popular. This process has shown CEO Mikael Yang two things: first, that people are comfortable chatting with brands and businesses through bots and second, that there is a demand for bots that can help with promotion and audience engagement.

Bot makers have been overlooking one of the most important use cases for bots when mass adoption occurs, Yang said.

Most of the bot builders are going to the business side of things [like] sophisticated automation, hotel bookings or restaurant reservations. They’re going this route and we think it’s a great route and will be a big market, but I haven’t seen platforms where it’s less about the sophisticated conversation and NLP and AI and more about audience engagement, where you can, in very creative ways, know who is your audience, who is most engaged, and use that to solicit some actions.

The bots people create with ManyChat send scheduled or automated messages — like a newsletter or RSS feed. Contests, forms, and plain old conversation can be used to gather additional information and increase engagement. Examples of new bots include those that have been created for the Revealed Recordings record label and the four million followers of spiritual quotes.

In late May, ManyChat introduced the ability to make Facebook Messenger bots, and the company has shared plans to add a series of new features, like polls, along with analytics to gauge a user’s level of interest.

Yang wants ManyChat bots to be able to send messages based on user response speed. That way, people who routinely answer messages in less than a minute could receive multiple messages a day, while people who typically respond more slowly might receive a message once a week. 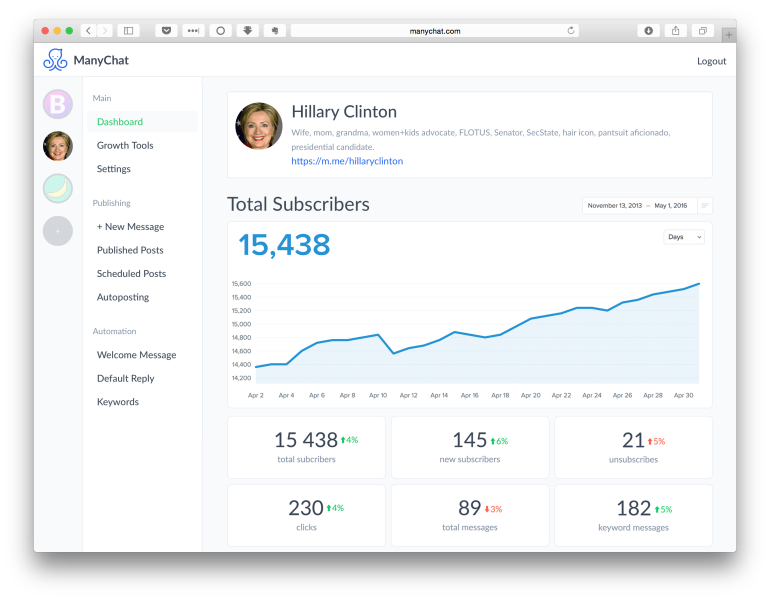 As an example, Yang cited presumptive Democratic presidential nominee Hillary Clinton, who might use a bot to share her latest news or opinions, better understand what percentage of her fans are for or against a certain policy, and target her most-engaged audience members. With this feature, she could find out which users typically respond to her messages in one minute or less.

This option would let Hillary target those really engaged users, Yang explained. She could say, ” ‘ManyChat, give me all my audience members who are super engaged with my content in San Francisco and send them this message: Do you want to be a volunteer at my next rally?’ ”