Lyft has launched a new service that it thinks will appeal to those riders who just want to arrive at meetings or at social gatherings in style. Called Lyft Premier, it matches you with a driver in a high-end sedan or SUV, such as a BMW 5 Series, Audi A6, Lexus ES, or Cadillac Escalade. Think of this as being akin to scoring first class on an airplane, an effort to rival Uber’s Black and SUV options.

The company has begun testing this offering out in the San Francisco Bay Area, Los Angeles, and New York City, three areas that likely have a propensity for luxury, business, or sophisticated travel. 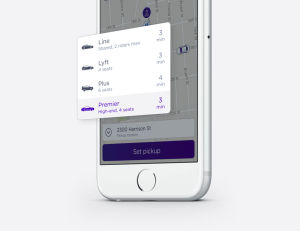 Above: How to access Lyft Premier from within the Lyft app.

But here’s the thing: Lyft has tried luxury before and failed at it. In 2014, the on-demand ride-hailing company launched a program called Lyft Plus that cost twice as much as a standard Lyft ride and picked up riders in a customized SUV with 20-inch sport wheels, a brushed steel mustache on the front grill, access to Spotify Premium, and more. Months later, the program was shuttered, with some drivers upset, claiming they were left holding the $34,000 bill to get “tricked-out” Lyft-branded Ford Explorers.

Perhaps Lyft has learned from its mistakes and Lyft Premier will be more successful. As the battle with its main competitor Uber continues to heat up, Lyft has to make sure that it can accommodate the wide range of riders it could encounter, from those on a budget to the ones with a bit more disposable income and a desire to project a certain image. Lyft Premier is targeted to those with business meetings or special nights out on the town, and drivers that participate in this program are said to receive more in earnings.

Lyft claims that more than 60 percent of its passengers have asked it to provide a more luxurious vehicle. It makes sense — if you’re a fan of the company’s culture and the overall experience makes you happy, you don’t necessarily want to jump over to Uber just because they have a fancy black town car. Until today, the “highest” option you could choose would be Lyft Plus, but that just means you can have more people in the car. Yes, you could use Lyft classic, but it’s like Russian Roulette in that you’re not guaranteed to get a nice-looking car — and there’s no way to really request one either.

So the next logical thing for Lyft to do is to get luxury vehicles out on the streets.