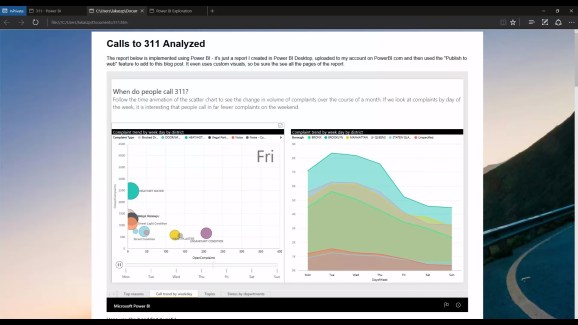 A dashboard from Microsoft Power BI that's been embedded into another website using the "publish to web" feature.

Microsoft today is announcing that it’s making the “publish to web” feature in its Power BI cloud-based business intelligence tool generally available at no additional cost for both free and pro users. The feature lets users take data visualizations they’ve created inside Power BI and share publicly accessible versions with dedicated URLs and HTML snippets that can be incorporated into other websites.

Also today Microsoft is announcing that the Power BI Embedded feature for integrating data visualizations natively into other applications will become generally available on July 11.

Microsoft first announced the preview of Power BI “publish to web” in February and announced the public preview for Power BI Embedded at its Build developer conference in March.

Embedded BI is something that many BI vendors eventually add in their product offerings, because sometimes the main application for querying and visualizing data just is not enough. Salesforce started down this path in September, when it announced that customers could embed dashboards into other parts of Salesforce.

To publish to web in Power BI, users can open the File menu and click “Publish to web.” It’s important to remember that doing this will make the dashboard and the data visible to anyone, so this is probably not the best choice for very sensitive information.

To give people a sense of what’s possible with the “publish to web” feature, Microsoft is releasing a gallery of visualizations made with Power BI.