Platinum Games is known for over-the-top action, but Scalebound is taking that top, adding a few dozen miles, and clearing it in a single leap.

Scalebound is one of Microsoft’s most anticipated exclusives. It’s an action game starring a man and his dragon, and it’s coming out for Xbox One and PC in 2017. Exclusives like Scalebound are important for Xbox One, since they help the console stand out from the better-selling PlayStation 4. Platinum Games is working on Scalebound, the same Japanese studio behind action hits like Bayonetta and Metal Gear Rising: Revengeance.

At last month’s Electronic Entertainment Expo, GamesBeat interviewed Scalebound’s director Hideki Kamiya, who has an impressive resume thanks to classics like the horror Resident Evil 2, action-focued Devil May Cry, and action-adventure game Okami. We talked about Scalebound’s inspirations, why the Japanese studio is able to resonate with western audiences, and more. 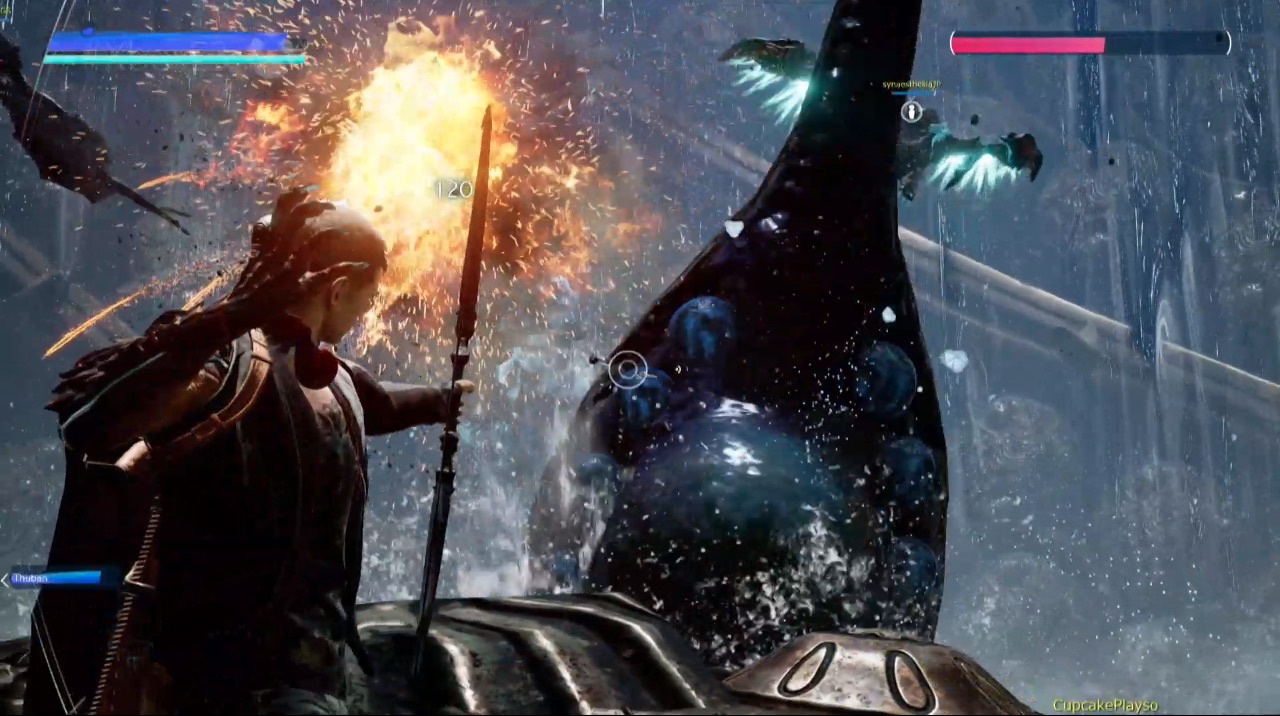 Above: A lot is going on in a fight during Scalebound.

GamesBeat: The demo at E3 was cool. I love how it transitioned from an action game, what you’d expect from Platinum, into almost a Panzer Dragoon-feeling when you ride your dragon. Is it a challenge to develop a game that switches between these styles?

Hideki Kamiya: It was actually a big challenge for us. We showed that for the first time today, getting on the dragon and getting into combat. Up until now, all the games we’ve made have been singular human player characters fighting against enemies their size. Now we have this enormous dragon who can do all these cool things. How do you team up with him? How do you attack and enter combat with him? And in this case, how do you jump on top of him and fight enemies together? It was something we spent a lot of time working on. It was a very difficult challenge.

GamesBeat: Platinum has a reputation for making big, over-the-top action games. Is that sometimes a burden, that expectation to keep make something bigger every time?

Kamiya: I wouldn’t call it a burden, because that makes it seem negative. People do have expectations of us, though. It’s our job as creators to answer those expectations and live up to them. You do feel the weight of that when you’re making a game.

GamesBeat: You’ve had a lot of different partners in making games. How does Microsoft compare to your other partners on past projects?

Kamiya: To put it in one word, Microsoft is big. They took a big bet on us to make a big game. But they have a ton of technology resources. They can do an enormous job supporting you and helping you make these big things. And so as a partnership, that’s been really interesting. All that support and all the resources they can bring to bear to make a big vision come to life is very impressive. It allows a team to learn a lot from people they wouldn’t otherwise be exposed to and grow in interesting ways. 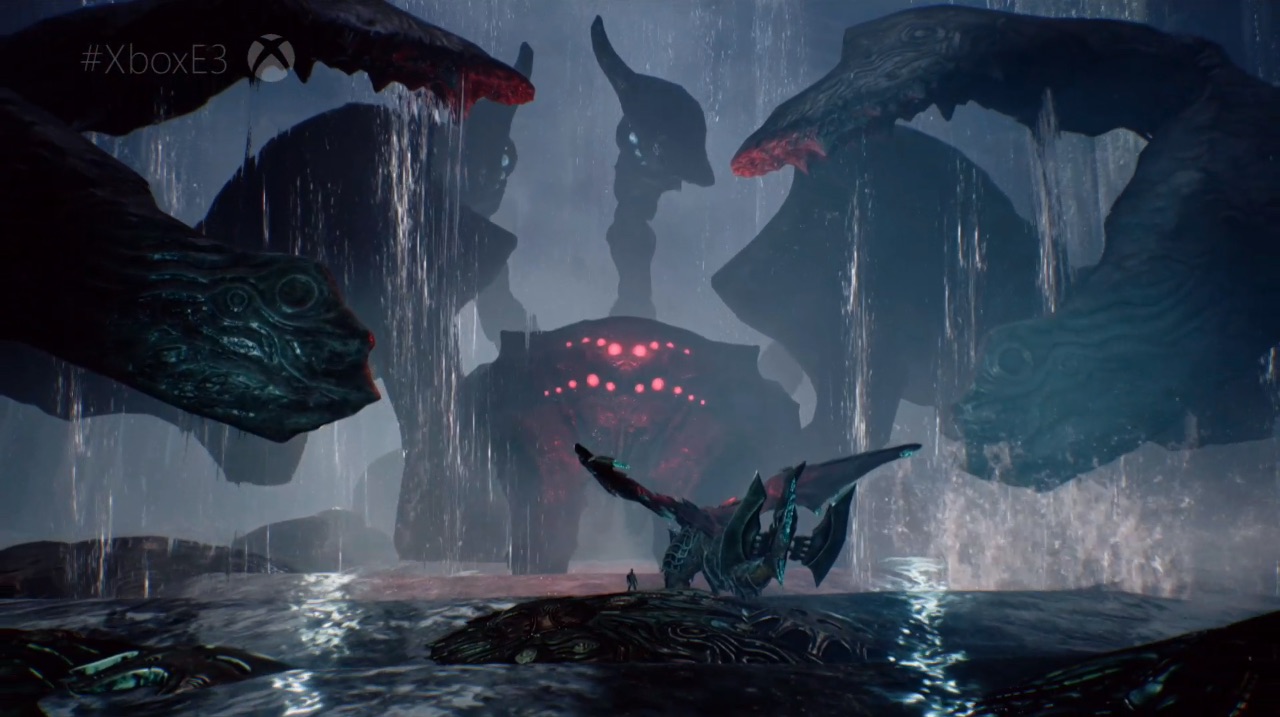 Above: A giant enemy crab!

GamesBeat: Platinum has worked on a lot of licensed games. Is it more fun to develop something that’s a known quantity, or is it better making something like Scalebound that’s all your own?

Kamiya: There’s not a preference as much as, we put a lot of passion and a lot of love into every project we do. What separates those isn’t necessarily whether they’re original or an existing property, an existing IP, but the scale of the projects. For instance, Scalebound is enormously complex. It’s taking a lot of time and a very big team to put it together. Other projects are of different scales, different sizes. Scalebound is the biggest thing we’ve ever done. There is a desire to do big things.

GamesBeat: We’ve seen a lot of games built around dragons — some successful, like Panzer Dragoon or The Elder Scrolls V: Skyrim. Others, like Lair, bombed. Did you look at any particular past games for inspiration?

Kamiya: More than games like those, we were inspired by classic games like Hydlide III or Sorcerian, the Dragon Slayer series, Dragon Quest. The dragons in those games were super compelling, but what pushed me was, can you take how those dragons made you feel and use modern technology to bring that to life in an interesting new way, as opposed to the way they were back in the day?

GamesBeat: How does Scalebound’s cooperative multiplayer work? Can players just join in while you’re playing alone, or is co-op a separate experience from the start?

Kamiya: Co-op isn’t a mode in Scalebound. We wanted to make a game that you could play however you wanted to play it. Scalebound has a story, a campaign you can play, and if you want to play through that by yourself you can, but you can also match up with your friends and play through it together. Co-op is integral to the experience in that way — it is campaign co-op — but we want the game to be something where you can decide how you want to play.

GamesBeat: Platinum Games has been able to resonate with a Western audience. What sets your games apart from other Japanese developers?

Kamiya: One, it’s cool to hear that. We really appreciate that. But we’re not really cognizant, when we start a project, of saying, this is going to be for Japan or this is going to be for the West. That might actually be the key. Thinking about what you’re good at, what you want to build, what you like, and staying true to that vision is something that resonates with most people. It allows them to take it in and make it their own thing, instead of saying, this is for someone else, this isn’t for me.