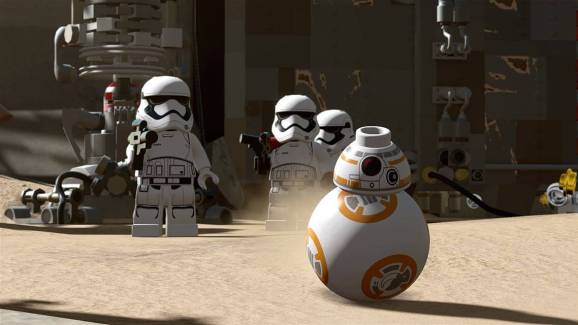 Look at all those stormtroopers shamelessly checking out BB-8's shapely back side!

Arnold Schwarzenegger had cameos in all major sports broadcasts this month — and it’s all thanks to one hit mobile strategy game.

GamesBeat has partnered with iSpot.tv, which measures TV advertising in real-time, to bring you a monthly report on how gaming brands are spending and which are generating the most digital response. The results below are for the top five spending gaming industry brands from June 1 to June 30.

The gaming industry’s TV ad spend took a dip last month, dropping from the $45 million spend in May to just $25.7 million in June. Seventy-one ads from 30 brands ran nearly 16,000 times, generating almost 1.6 billion impressions on TV. This month’s leaderboard features many of the usual suspects, with Machine Zone once again leading the pack.

Machine Zone’s estimated spend was just under $6 million, having run five ads 3,647 times. Accounting for 21.9 percent of the industry’s total spend, the brand spread these airings across 48 networks and managed to generate over 25 percent of the entire industry’s impressions on TV. Running most often during primetime, the brand leveraged high-profile events like the NBA Finals, the Stanley Cup, the UEFA Euro Championship, and the Copa America Centenario to drive eyeballs.

Blizzard Entertainment went hard at the beginning of the month, continuing its push of the hit online team shooter Overwatch. Though slowing greatly after June 6, the brand still managed to run 5 spots over 800 times throughout June, generating over 120 million impressions on TV. Blizzard’s top ad, “Your Watch Begins,” which was retired on the 15th, brought in more than half of those impressions, totalling nearly 70 million on its own. In total, Blizzard’s spend accounted for 16.2 percent ($4.1 million) of the industry’s overall outlay.

Xbox continued to ramp up its informational campaign through June, spending an estimated $2.4 million (or 9.5 percent of the industry’s total) and running two ads 550 times. These ads appeared during the NBA Finals, American Grit, and Tosh.0, but most often on South Park. The bulk of the spend went toward “Consider the Facts,” an ad illustrating the pros of the brand’s newest console, the Xbox One. However, a small percentage of this budget (just under 1 percent), went toward “Clueless Gamer,” an ad that cross-promotes the brand, Bethesda Softworks’ Doom, and TBS’s Conan.

Still pushing the newest edition to cult-classic Doom, which launched in May, Bethesda Softworks also slowed its spend, trickling down to less than two airings per day after June 15. Although the brand spent an estimated $2 million, 8 percent of the industry’s total, it was only able to generate 4.6 million impressions on TV through its 246 airings of one spot, “Launch Trailer.” Running most prominently on Fox Sports 1, AMC and NBA TV, this spot ran during the NBA Finals, Preacher and Roots.

PlayStation closes out our leaderboard, spending 7.7 percent of the industry’s total (or just under an estimated $2 million) in the past month. The brand ran 3 commercials over 1,000 times, all focused around the new Lego Star Wars game, the Force Awakens. Although most gaming brands slowed spending towards the middle of the month, Playstation took a different approach, ramping up its spend on the 22nd ahead of the game’s release on the June 28. The brand focused mainly on “E3 Trailer,” but also ran the ad “Adventures” quite often.