On March 3, 1991, after a drunken high-speed chase, Rodney King was pulled over by the Los Angeles Police Department and savagely beaten. The arresting police officers tasered King twice and clubbed the African-American man countless times with their batons, employing a striking technique called  “power strokes.” 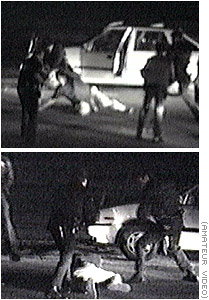 Above: Stills from George Holliday’s video of the Rodney King beating.

The incident was videotaped by a plumber, George Holliday, who used a camcorder as he watched from the balcony of his apartment. The video was broadcast around the world and played a central role in the prosecution of the police officers involved. While the LAPD officers were ultimately acquitted, the King video served to raise public awareness of racism within the LAPD and civil rights violations by law enforcement.

International pop star Peter Gabriel watched the King tape and immediately understood the galvanizing power of video. The following year, he cofounded WITNESS, an organization that distributes video cameras and provides training to help individuals document human rights abuses worldwide. At the time, video cameras were only just going mainstream, and the formation of WITNESS came on the heels of Gabriel’s earlier efforts campaigning against abuse and torture.

In the late 1980s, Gabriel had helped organize the Amnesty International concert series — featuring Sting, Tracy Chapman, Bono and many others — a global tour to raise money to increase public awareness of human rights abuses. Using a Sony camcorder, Gabriel recorded stories by survivors of torture and atrocities. In a 2006 TED Talk, he described hearing the accounts of “people who’d watched their family being shot in front of them, who’d had a partner thrown out of an airplane into an ocean.” He described how “Suddenly this world of human rights arrived in my world, and I couldn’t really walk away in quite the same way as before.”

Some 25 years after the King beating and the founding of WITNESS, nearly everyone has a video camera in their pocket in the form of a smartphone. And with the introduction of Facebook Live and Periscope, the watchdog power of video has increased exponentially.

“Video — perhaps in part due to the increasing frequency with which it is wielded — continues to expose abuses and document different, sometimes game-changing perspectives to a story,” said Matisse Bustos Hawkes, associate director of communications and engagement at WITNESS, via an email interview. “In the case of the shooting death of Walter Scott in South Carolina last April, and in this week’s death of Alton Sterling in Louisiana, some eyewitnesses released their footage only after police reports were released. They did this specifically to call into question the ‘official’ narrative.”

After waiting a day for the Baton Rouge police to release footage of Sterling’s death, the first video published to social media was uploaded to Facebook and Instagram by a group that calls itself Stop the Killing. Founder Arthur “Silky Slim” Reed told The Washington Post that his organization listens to their local police scanner for murders and then videotapes the crime scene in an effort to deter young people in Baton Rouge from violence. In this instance, however, “We see a great injustice, and we wanted it to be known,” Reed said.

Videos like the one made by Reed and watched by millions may do more than just call attention to a specific case.

We’ve welcomed the opportunities that greater access to video has meant for people to document abuses and we’ve also noted the challenges that access has created. Challenges include, but aren’t limited to: the safety of people filming as well as those captured in footage immediately shared online; the ethics of sharing graphic imagery widely; how to best authenticate eyewitness video for future investigations or as evidence; and the role that tech companies and platforms play in the distribution — and in the silencing (through content take-downs) — of citizen witnessing efforts. In this age of video, we’re seeking to close an accountability gap: How can we ensure that more video of abuses will equal more rights and justice for all?

Above all, these videos may inspire intelligent and passionate discourse and debate about racism, about gun control, and about what measures society might take to break the cycle of mutual mistrust that often exists between police and minority communities. The advent of video, and in particular live video, and the democratization of its production, distribution, and consumption has the power to achieve this and more.

“The dream is that we could have a world in which anyone who has anything bad happen to them of this sort has a chance of getting their story uploaded, being seen, being watched, that they really know that they can be heard,” Gabriel said.”There would be a giant website, maybe, a little like Google Earth, and you could fly over and find out the realities of what’s going, for the world’s inhabitants.”

That dream has become reality.