The PC market continues to slowly but surely decline. Both Gartner and IDC have found PC shipments were down globally, again.

Gartner estimates worldwide PC shipments fell 5.2 percent to 64.3 million units in Q2 2016, the seventh consecutive quarter of PC shipment declines. The only good news was that PC shipments in North America increased for the first time in five quarters.

The top six vendors were Lenovo, HP, Dell, Asus, Apple, and Acer. As you can see in the chart below, Gartner found that only Lenovo and Apple experienced a decrease in PC shipments, though not significant ones. The rest of the market, however, was down 19.1 percent.

IDC agrees with Gartner that Lenovo and Apple were down, and that the remaining smaller companies suffered a double-digit drop. The exact numbers, for your perusal: 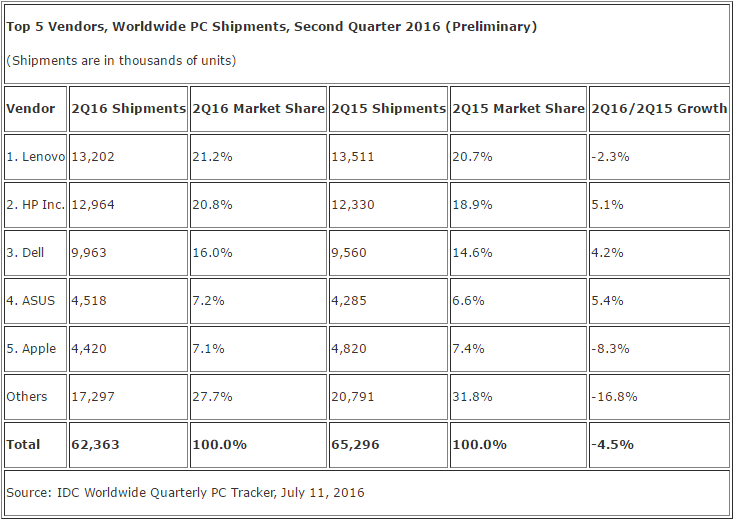 While Brexit was mentioned as having potentially unforeseen consequences, Gartner analysts believe the overall PC market is showing some signs of improvement. When that might happen, however, is unclear.

“One of the ongoing problems in the PC market has been the price hike in selected regions due to the weakening local currency against the U.S. dollar,” Gartner principal analyst Mikako Kitagawa said in a statement. “The price issue has impacted the EMEA and Latin America regions for the past year. However, PC shipment declines became rather modest in the second quarter compared to previous quarters, which suggests a fading currency impact.”

IDC meanwhile pointed to improved inventory levels, but warned that wasn’t enough to reverse the decline trend. The firm did, however, note that the expiration of free Windows 10 upgrades could help push some users into buying new systems rather than upgrading older ones.

“The PC market continues to struggle as we wait for replacements to accelerate, along with some return of spending from phones, tablets, and other IT,” IDC analyst Loren Loverde said in a statement. “Our long-term outlook remains cautious.”

So far, Windows 10 has been unable to reverse the PC decline, and in many ways has only furthered it. Going forward, though, Microsoft’s latest and greatest operating system could actually spur sales, but nobody is willing to project an exact timeframe.