Russia’s online and mobile games market amounted to 51.9 billion rubles in 2015, or $830 million at the average exchange rate, up 2 percent from the previous year. The estimate comes from Mail.ru Group, a major, LSE-listed Russian internet group with leading positions in this industry.

An earlier forecast from western market research agency Newzoo put the Russian market at some $1.3 billion.

Massively multiplayer online games (MMO) were still the most popular games, however, with a share estimated at 55 percent of the online and mobile game market. This segment amounted to 29 billion rubles in 2015 (approximately $464 million), up 4 percent in rubles from 2014. 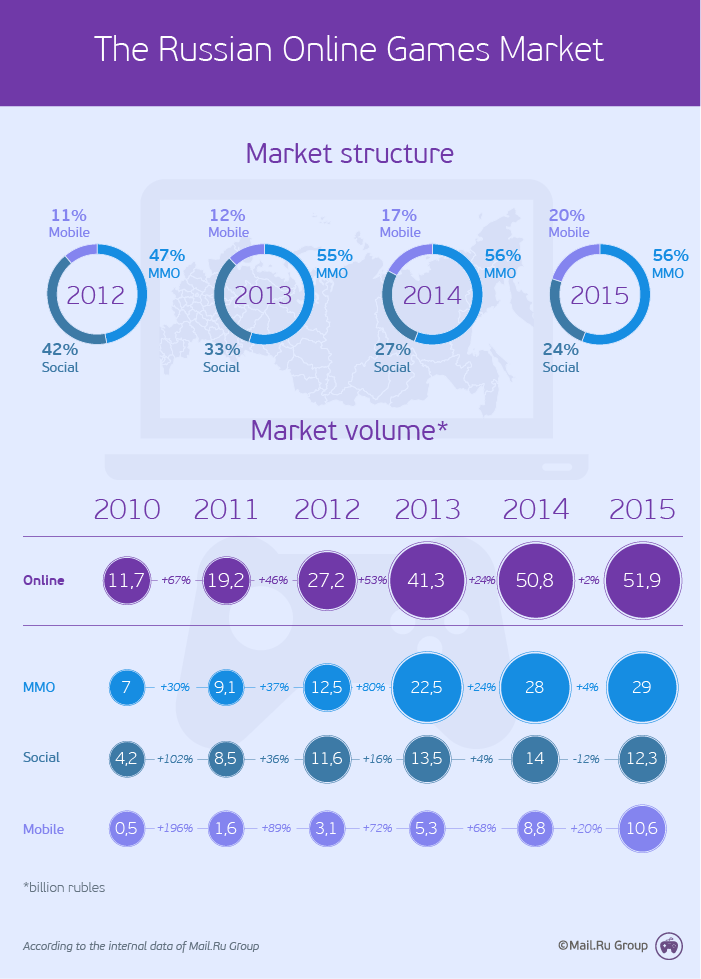 “2015 was not an easy year for the industry: several players left the market and, as a result, the share of social games fell. The situation in the MMO segment is more stable, with a number of interesting launches taking place recently (…). The most encouraging trend is demonstrated by mobile games, which, in their volume, have almost equaled the social ones,” commented Vasily Maguryan, Head of IT-Territory Studio at Mail.Ru Group.

While its revenue from MMO games rose by 6.3 percent in 2015, Mail.ru Group continued to develop mobile games actively. In late 2015 and early 2106, the group launched Armored Warfare: Project Armata, Evolution: Heroes of Utopia and Juggernaut Wars. In June 2016, the company announced the launch of a new experimental game development department for online and offline games targeting the Russian and Western markets.

According to Newzoo, Russia was the 12th largest games market in the world in 2014 and 2015. Last year, there were 59.5 million gamers in Russia, of which 30.8 million spent money on games.

The majority of this Russian online gaming traffic is coming from desktop devices.

According to Unity Technology and eMarketer, mobile game installs are far higher on Android devices (86%) than on iOS (11%), reflecting the success of Google’s operation system in the Russian mobile market.

The average payer spent $40.95 per year (slightly lower than the Eastern European average), Newzoo calculated. The agency predicted a healthy growth of Russia’s game market in the coming years, with the CAGR of +5.2%, higher than any Western European country.

Russian companies are also active in terms of R&D. In March 2016, GS Group presented the GS Gamekit, the first Russian game console with HD set-top box functions. On its side, Russian startup Fibrum is about to launch of a virtual-reality platform to bring together gamers, as well as game and VR headset developers from different countries.