Last week I helped to kick off Delaware State University’s inaugural Android Bootcamp as lead instructor. I welcomed a total of 13 students, with little to no programming experience, with the intent of teaching programming and Android fundamentals. The program, hosted by historically black college Delaware State University (DelState), is mostly composed of black men, ranging in age from 18 to 35. 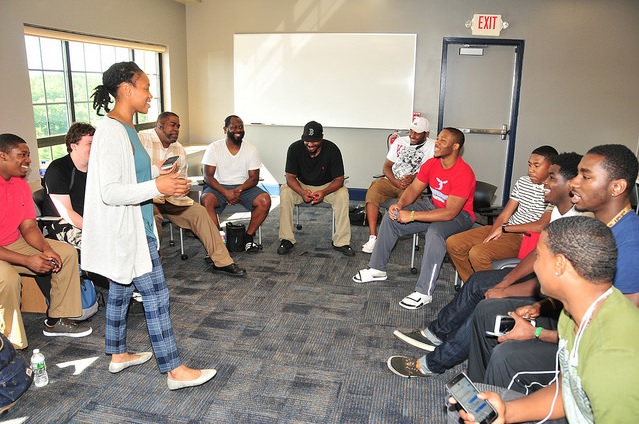 Our day one began immediately after the Fourth of July holiday. New and afresh, all of the students are filled with excitement to learn how to code. We spent our first day together getting to know one another and discussing our various backgrounds and reasons for being in the room. Some of the students are recent college graduates aiming to get a leg up in the job market by adding coding as a skill set. Others are using this course as a springboard in their journey to become a software developer. There’s also a father in the group who is using the class to teach his 14-year old daughter how to code. Outside of the black men, our cohort also includes a 62-year-old retired educator, a social worker, and a local student who is considering applying to the DelState computer science program.

We talk briefly about the current landscape of blacks working in tech, and that currently only 1% of the technical workforce at their favorite companies Google, Facebook, and Twitter are black. The same percentage holds true for those seeking tech entrepreneurship — only 1% of venture backed tech companies have  black founders. My men, resilient and hopeful, remain unmoved by the scanty statistic and only see opportunity. Our day ends at 4:30pm with excitement and anticipation for what could be accomplished in the next six weeks.

Unknown to us (at that time), Alton Sterling, a black man and father of five, was murdered by police earlier that day.

Day Two – What we see

Day two we jump into Android development. The day’s lesson is about user interfaces (UI) or simply put — what we see. We explore two layouts used in the making of Android apps, Linear Layout and Relative Layout. In a linear layout, elements are aligned in a single row or column. In comparison to relative layout, where you can align elements in relation to each other.

During our lunch break, one of the students shared the below Twitter message in our class’s Slack channel.

**TRIGGER WARNING**
Remember his name – #AltonSterling
When will it end? When is enough, enough? pic.twitter.com/7KxiOaOkny

The video attached to the tweet shows police officers tackling a black man to the ground, and then one of the officers pulls out his gun and puts it to the man’s chest. I stopped the video at this point. This man was Alton Sterling. He was someone’s father. The media reports that he was well loved in his neighborhood and affectionately called “CD man.” I saw a man murdered by police on social media. What did the officer see? What did he see to carelessly pull a gun to a man’s chest without any regard to the life that man carried.

After lunch, we pause to reflect on Alton Sterling’s life. We pause to acknowledge that, of all the people shot and killed by police, 25% are black. We continue our lesson for the day.

By the morning’s start, the news reported another police killing of a black man, Philando Castile. Philando Castile was shot and killed in front of his girlfriend and her four-year-old daughter, who was sitting in the car’s back seat. He was reaching for his wallet when a police officer shot him four times.

Today’s lesson is about interactions. We start with a simple example, a single button in our view. If we push the button, what happens? How do we program our application, so that something happens when we push the button? This is the first day that the students see the Java programming language.

Once again, we awake to more horrifying  news. The previous evening, a black man, Micah Johnson, ambushed and targeted police at a Dallas protest against the recent police killings. Five police officers were killed in the ambush.

We start each day with a “stand-up.” Stand-ups are brief meetings used by software development teams to talk about the day’s plan and any potential challenges. We use stand-ups at the beginning of each class to debrief from the previous day’s lesson, check to see if students are keeping up with the pace or need additional help, and to give an overview of that day’s lesson. At today’s standup, we gave space for anyone to talk about anything that may be on their mind, including the recent police killings. Most of the students opted not to discuss the police killings. Instead the conversation moved backed to our first day’s discussion of 1%. They mention that this is the number that remains with them. They are encouraged and excited about the possibilities that remain in front of them. They make a vow to be a part of group that increases that 1%.

We start the day’s lesson. Object oriented programming is the topic.

[This story originally appeared on the author’s own blog.]

Hadiyah Mujhid is a software engineer and entrepreneur. She is cofounder of software agency Playpen Labs and of the nonprofit organization Black Founders. She also teaches women how to code at Hackbright Academy.