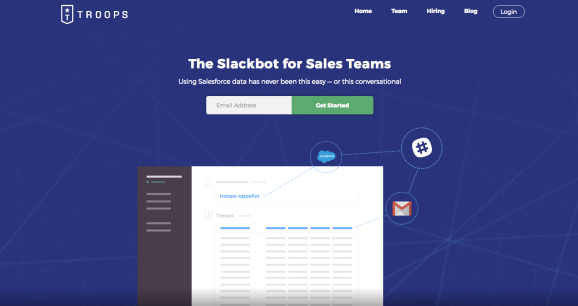 When you’re using a customer relationship management (CRM) product, it’s not exactly the most lively experience, is it? It’s just a bunch of data and fields that you have to fill out in a manner that doesn’t really match up with the conversational manner work is starting to acquire. Troops wants to breathe new life into how we interact with our CRM system by leveraging one of the more popular productivity apps, Slack.

Started by Dan Reich, Scott Britton, and Greg Ratner, Troops uses artificial intelligence to display information based on conversations you’re having in Slack while making customer data available without having to jump between multiple applications. While it could work for any CRM system, its initial focus is Salesforce, one of the market leaders in the space.

“My cofounders and I have all come to appreciate how important the function of a CRM is to run a business,” Reich told VentureBeat. “It is literally the system of record for a business to store information, manage workflow and sales automation, and ultimately make decisions to grow a business. I saw this first-hand at Salesforce after they acquired Buddy Media (which acquired my startup). It is the guiding light for running a business. We also know, however, how difficult and cumbersome many of these systems are to use. Simply put, the easier it is to manage information on your customers and business, the easier it is to grow your business.”

With this redefinition of what work is, the idea of “getting things done” is no longer going to involve static fields and forms. Instead, Reich believes it’s going to be like having a conversation with an intelligent human being.

Because its work involves the enterprise, Troops is sticking with its Slack integration for now. “I think they are doing so much right, ranging from their product development strategy to their developer ecosystem,” Reich explained. He did say that there are plans to extend its bot to other messaging platforms, but declined to specify which ones may be next.

It’s important to note that Troops is currently still in closed beta, so if you’re interested in trying it out, you’ll have to enter your email address and join the waitlist. Previously it tested its bot with 70 to 80 companies, and eventually it’ll be available to the public. It plans to make it free for users for a while before charging for more premium features in the future.

To date, the company has raised $2.6 million in funding from First Round Capital and numerous angel investors.